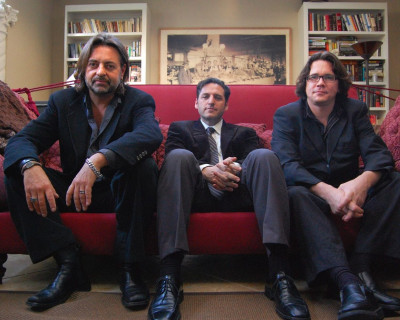 You'd hear songs on the radio that you loved, but then someone from school would mention some obscure band from England, and they'd have a cousin or friend who dubbed a cassette and they'd surreptitiously loan it to you in Science class, and then -- voila -- that night in your bedroom huge new vistas would open up that made your blood go carbonated.

Brooklyn trio Populuxe seems to be one of those bands that keep flying under the radar. But as their most recent album Beauty In A Broken Place shows, their wide mix of influences and engaging lyrics certainly deserve more. Echoes And Dust checked in with the group’s mastermind Rob Shapiro about what lies behind the band, its ideas, and music.

(((o))): Tell us a bit about the origins of the band and where the name came from. Does it have anything to do with Thomas Hine’s book of the same name?

Rob Shapiro: It does have to do with Thomas Hine! I read that book shortly after it came out, and, aside from generally loving that era (it was a big touchstone for many of us in my age group, the sort of looking ironically backward to the time when a triumphant America gorged/defined itself on this steady diet of aspiration, commerce, and self-delusion, and believed it!, prior, of course, to everything sort of crashing down over it…), and three things struck me: one, deluxe art for a daily audience with the idea of aesthetically adding to their lives, whether it’s in the form of industrial/automobile design, advertising copy, architecture, even paperback cover layout and album art; two, the cartoonish adopting of all different styles and motifs, from polynesian “Tiki” culture, to Parisian, to caveman/hotrod, and all in between, and mashing them together into this sort of pan-Western half self-winking and half self-deluding victor’s viewpoint; and three, that for brief windows of time, artists take the lead, and ideas and expression are wide-ranging, explosively creative, and genre-melding.

(((o))): There seem to be two streams in your music – the inspiration from ‘thinking man pop’ like XTC, Todd Rundgren, on one hand, and then possibly Curtis Mayfield and 70’s soul or later on, The Replacements.

RS: The world the three of us came from had both freer radio that wasn’t stratified into micro-segments and locked-down playlists and a word-of-mouth music puzzle that required engagement to discover and solve. You’d hear songs on the radio that you loved, but then someone from school would mention some obscure band from England, and they’d have a cousin or friend who dubbed a cassette and they’d surreptitiously loan it to you in Science class, and then — voila — that night in your bedroom huge new vistas would open up that made your blood go carbonated. And then finding like-minded people who knew about this obscure band was revelatory and bonding.

Also, the ROLE of music has changed enormously — in our impressionable youth, it was a populist artform that functioned as social glue, social sorter, explainer of complex emotions, a rallying cry, a place to find commonality/community, the emollient for celebration and the salve for alienation and teen confusion. So, in total, a lot of music was available and valid, it decorated the most private interior places, and bonded to the actual emotional fabric of life.

And, as I said, radio was everything, and smart “pop” was EVERYWHERE. It was an embarrassment of riches — the songwriting genius of Steely Dan, the power and precision of Motown, Kool & The Gang, Earth Wind & Fire, Curtis Mayfield, the hilarity and impossibility of Zappa and Captain Beefheart, the crushing, exhilarating intelligence of Zeppelin, the seemingly endless creativity, emotion, generosity and esprit de corps of the Beatles, the richness and dazzling deep well of the Beach Boys, the shaking, kinetic, syncopated stomp of James Brown, the sophistication and barbed playfulness of Miles…I mean, even the shittiest, most banal songs were played by serious musicians and invested (often over-invested!) with great import and sensitivity. It was an endless feast.

Then it all crashes and from the ruins comes Punk Rock, this blast of excitement, drive, and a much freer sense of what could be written about and how. We’re right in the crosshairs of all of that. And it all feels valid, exciting, and ready to be explored and mined.

(((o))): On the other hand, there seems to be a strong social commentary in your lyrics, particularly on your last two albums (Lumiere and Beauty In A Broken Place). What inspires you in that respect?

RS: We’re living in serious times; it really is that simple. There’s always going to be a strong deeply personal and interior component to my stuff because that’s really the wellspring — trying to make sense of the world and find a place in it. I’ve never liked polemicals as songs — that’s what slogans are for (for me). Overly political music has always annoyed me and struck me as too transitory. I personally need some sort of charge from it, something that I connect to on a body-level, heart-level, or when it’s really good, both — Stevie Wonder and Curtis Mayfield are both GREAT at that. I mean, ‘You Haven’t Done Nothing’ and ‘Freddie’s Dead’ are both incredible social commentary AND deeply felt, emotional narratives, AND great productions AND as funky and irresistible as it gets.

And then there’s stuff like Lenny Bruce and Richard Pryor, which is a different kind of music; it’s still rhythmic and profound, but gets to the point via humor. Or early hip hop, which completely dispenses with niceties and tells the story directly, in these daring leaps of word and rhyme scheme. Or even just Benny Goodman having an integrated band in 1936, or The Equals in Britain in the ’60s.