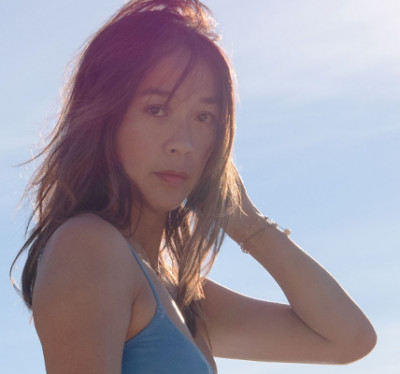 Kazu Makino is well versed in touring, with over 25 years of experience with alternative-rock royalty Blonde Redhead. But this time Kazu is without her musical companions – shedding her 25-year history to play in the intimate setting of Hackney’s MOTH Club with her stripped back and opalescent solo debut, Adult Baby. It was an opportunity to see one of the undergrounds treasured enigmas, famously shy and elusive, in a far more direct setting.

Opening the night was London’s own Saint Leonard – with their brand of psychedelic  lounge. Their sound is that which is based in the realm of explorative space rock pinned down with a classic retrograde vocal melody. It ends up sounding like Failure and Hum by way of Butlins Karaoke; or if there was a hull breach at the Tranquillity Base Hotel & Casino – caused by a depressed Wayne Coyne. It’s a quirky atmosphere that works, and the audience is soon drawn into their earthly grounded rock. It’s a promising, if at times repetitive, mood-setter that works best taken as a whole – as if a mood piece for The Hitchhiker’s Guide to the Galaxy.

Adult Baby seems like a difficult album to get right live – its mixing and clear production create a layered scarcity throughout its runtime. Kazu had the somewhat unenviable task of trying to reproduce such an impressively measured live sound in the small confines of the MOTH club. Armed with a small smattering of collaborators, she was tasked with creating reproductions of full orchestras and miasmic pin-drop electronics out of the controlled conditions of a studio album.

Immediately, Kazu’s 20 years of experience treat her well – as she borders on hypnotic with her voice free to stand tall in the minimalist void. By her own volition, Kazu is famously an incredibly shy individual – but on stage her vocal idiosyncrasies and meandering sentences that seem to go on without end brings her self to the forefront. There is more shoegaze-infused fuzz on display than in the album, but the minimalism and premeditated silence goes a long way to filling the room with volume – bending the walls to breaking point with quietude.

The set reaches its zenith with ‘Come Behind Me, So Good!’, which waltzes with a pious opulence. Whilst ‘Meo’ and ‘Coyote’ work just fine in their lower definition; ‘Come Behind Me, So Good!’ is elevated with its subtleties left intact. It’s a remarkable feat, transposing the studio grandness with the bare minimum of tools at her disposal. Strings swirl and electronics ember to produce a warm glowing intimacy that swells and overwhelms when required.

Kazu ends the play through without performing a single Blonde Redhead song, and that is as it should be. The album is the product of an introvert who has found expression through music, and its with Adult Baby that she has transmitted her clearest expression. Whether Kazu continues her solo work, or if this is a one off, is a mystery – and it’s emblematic of her often shrouded image. But whatever the future, this tranquil translucent project is here in all its ephemerality in the now – a fleeting joy all the better for its mystery.