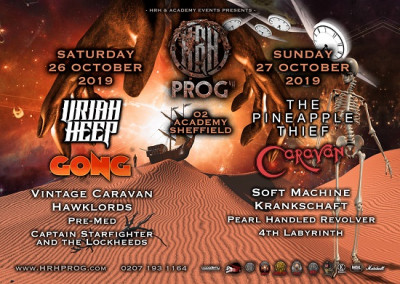 Hard Rock Hell’s regular prog festival has moved. No longer situated in the furthest flung reaches of North Wales, it’s now adopting the approach Reading and Leeds festivals pioneered many years ago: simultaneously host events in the North and South of England, and cart the bands between the two venues. With events simultaneously taking place in England’s capital city and Sheffield hosting the northern leg, Echoes and Dust headed to Yorkshire for the weekend to keep abreast of developments.

Touching down in the O2 Academy (the London equivalent takes place at Shepherd’s Bush Empire), the first thing to note is that this once two-stage, multi-day festival is reduced to one stage, and accommodation options, whilst still available, are off site, rather than the chalets previously offered to attendees. These changes ensure the event has significantly less of a festival feel, and now more closely resembles a two-day gig, albeit one with an all-day line-up and merchandise opportunities that far outstrip your usual fare.

Musically, HRH Prog hasn’t moved anywhere near as far as their geographical relocation. The “if it ain’t broke. . .” formula involves polling the audience to see who they’d like to book, then pulling together a bill full of familiar, tried-and-tested prog options with a smattering of new talent. What makes this eighth edition of the festival unmissable is how much that bill relies on bands with either the Canterbury sound present in their DNA, or an association with the mighty Hawkwind.

Captain Starfighter and the Lockheeds, named after the similarly-titled Robert Calvert album, set the tone for what’s to come brilliantly. Ex-Hawk Dead Fred features prominently and shines, in the first of two appearances for the keys man, alongside frontman Steve Smith, members of psych mainstays Red Elektra 69, plus Lee Carr, bassist with Delphini, and the latter band’s performance artist, who fills the “Stacia” role with her own unique lights, costumes and dance.

Their set is full of stellar performances of Hawkwind and Calvert classics – ‘The Aerospaceage Inferno’ galvanises the audience from the start, before ‘Spirit of the Age’ and ‘Quark, Strangeness and Charm’ seal the deal. There’s no let up, save some between-song faffing, as they launch into Hawklords’ ‘25 Years’, their set culminating in a wild rendition of ‘Ejection’. Importantly, Captain Starfighter and the Lockheeds have a lot of fun on stage and it’s infectious.

Pre-Med capitalise on the early atmosphere with their own high octane variety of space rock, and sensibly rouse the crowd by including ‘Hassan I Sahba’, another Hawkwind cover. It’s been a tough year for the band – former bassist Dave Saunders, and his partner, Kim Summers (vocalist Becky’s sister), both died at the end of 2018. This evening’s set must have felt great for a band who decided to press on in the face of tragedy, in tribute to their fallen friends. No wonder Becky “Boosh” Summers’ powerful vocals, that twist the band’s sound in different directions, sound so triumphant. New recruit Mark Piercy handles bass duties with aplomb. They play all four tracks from their most recent 2017 EP Prescriptionised, with the title track, and closer ‘Higher’, both set highlights. On this evening’s evidence, Pre-Med are firing on all cylinders.

Hawklords should, by rights, raise the bar on what’s come before. With no disrespect to other space rock bands, this crew have now built up a catalogue that should ensure every set is a show-stopper. Tonight, although the core trio of Jerry Richards, Tom Ashurst and Dave Pearce don’t put a foot wrong, they feel hampered by personnel changes. Nik Turner is guesting on sax, and usual rouser ‘We Are One’ is muffled as the sound crew struggle to cope with levels as feedback lurks around every corner. Turner, based on this year’s solo album, and last year’s fantastic collaboration with Youth, has far from lost it. Yet this evening, he’s a weak link and much of his playing sounds leaden.

Hawklords then tackle ‘The Aerospaceage Inferno’, but with less lustre than Captain Starfighter’s take we heard earlier. Harvey Bainbridge is taking a break from the band, so Dead Fred is in on keys. He’s not a natural fit for Bainbridge’s parts, and some of his hammering during the punky closer ‘SR-71’ is clunky and out of place. The following night marks Turner’s last appearance on the tour, as he sustains an injury and has to step down. We wish Thunder Rider well and hope he’s back to his best health and form soon; this event was unfortunately not a great showcase for the player, or the band.

The Vintage Caravan quickly ensure any momentum lost by Hawklords’ misstep is regained. New to many in the audience, the young Icelandic band trade in heavy rock, with time signature changes possibly their most prog trait. Theirs is the most energetic performance of the entire weekend, and ‘Reflections’ proves to be their call to arms. The intensity levels do not drop, as both riffs and sweat flow freely from the committed power trio. Óskar Logi Ágústsson, who started the band aged 12, plays fiery guitar and sings with a confidence gained from doing this all his life.

In their more psychedelic moments, Alexander Örn Númason’s bass holds down much of the sonic spectrum, allowing Ágústsson’s guitar to explore the upper end of the instrument’s register, an invitation that frequently causes sparks to fly. The Vintage Caravan cover tracks from each of their three albums to a happy, now equally sweaty, throng, who then march to the merch desk to invest in the band’s latest, Gateways. Catch this band live, if you can – the sound of three hard-rock virtuosos battering their instruments like the last 40 years never happened isn’t a rarity, but a band making quicksilver from these base metals is alchemy in action.

Another band on fine form follow. Gong are operating at such a high level at present it’s a sight to behold. They pay homage to the band’s past by turning ‘Can’t Kill Me’ inside out, at times a jazz squall, at others barely there and mysterious. ‘Master Builder’, or the “Om Riff”, should be a climatic, transcendental affair, and it is. Best is ‘Forever Reoccurring’, from the band’s latest studio album. Fabio Golfetti’s glissando guitars, Dave Sturt’s elastic bottom end bass, Kavus Torabi’s distinctive melodic language, Ian East’s free flowing sax and Cheb Nettle’s brilliant drumming come together on this track to an orgiastic summation of the song’s key theme: there is only now.

Uriah Heep round off the evening’s entertainment with a polished performance that delivers to their keen fan base. Mick Rock runs a tight ship, and there’s not a note out of place, with Bernie Shaw’s vocals and Phil Lanzon’s heavy organ sound now long established as mainstays of the band, and rich harmonies demonstrating the chemistry between all the players.

This is the “Living The Dream” tour, meaning we hear four tracks from this line-up’s recent album, which are serviceable, but don’t stand up alongside the group’s legacy compositions. Aside from these, and excepting the AOR metal of ‘Too Scared To Run’, they sensibly opt to please the prog-leaning crowd by focusing their set on tracks from 1970 to 1972. This means the show gathers momentum as the crowd naturally tire, culminating in crowd pleaser ‘The Lady in Black’, before the quintet come back out for a dramatic take on ‘Sunrise’ and finally ‘Easy Livin’’ to ensure followers leave with smiles on their faces.