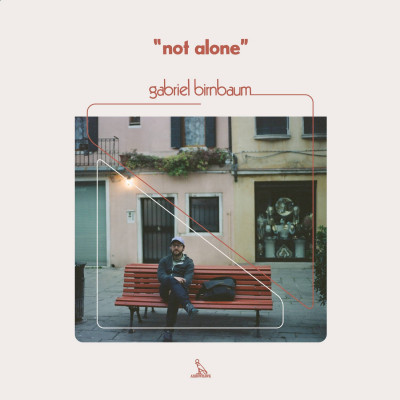 Not Alone by Gabriel Birnbaum

Yes, it is almost always easy to recognize a great album the moment you hear it. No problem there. But, there could be a problem with those albums after all. With quite a few of them it is not always the best (personal) moment to listen to them. They could be dense, heavy with concepts and meaning. Take as an example Nick Cave’s latest masterpiece Ghosteen. It is certainly great, but really have to be in a good mood to go through that one in one go.

Somehow, it turns out that it is those small, unassuming, but otherwise excellent albums in any other way that you somehow keep on playing at any point in time with ease, with you suddenly realizing they are becoming favorites.

The most recent case in point Gabriel Birnbaum and his album Not Alone. You’ve probably not heard of Gabriel unless you are familiar with his band Wilder Maker or any of his other collaborative musical incarnations, playing anywhere from Bonnaroo Festival to private houses. That also includes any kind of music that comes up to your mind from singer/songwriter acoustics to avant-garde jazz.

You can easily label Not Alone in the former category and be both right and wrong at the same time. You would be right in the sense that Birnbaum walks the same lines as do Bill Callahan or Kevin Morby. And you could certainly be wrong if you assume it is the ‘same old’ acoustic fare with very little melodic variations, and lyrics constantly concentrating on the personal ’pains’.

Gabriel has got the musical knowledge in the nails of his fingers and has enough humor and irony in him to come up with self-indulgent lyrics. I mean who would introduce his album with the following first sentence: “Gabriel Birnbaum turned 21 on stage at a bar in Tampa, Florida, to the sound of strangers singing ‘happy birthday dear Dave’, having misheard his name.”

A month or even more so since I first put this album on, I constantly catch myself playing it, more than quite a few of those that are going to end up on many ‘best of the year’ lists. I guess it is one of those creeping sleepers that you definitely can play at any point in time with ease.