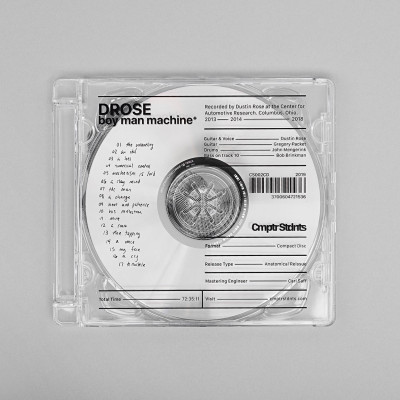 What do you have when you take a Center for Automotive Research and an experimental rock band from Columbus, Ohio? You have the latest release by Drose titled boy man machine+. This album is not entirely new. It combines their 2016 album of the same name, their 7″ titled a voice and several unreleased tracks. This release is a first for the Computer Students‘ label Anatomical Reissues series, “which reissues albums with highly conceptual design, presentation and packaging.”. This reissue is all that and more.

I was given the CD version of this release. The jewel case is made of clear plastic. On the front of the jewel case, you will find information about the release: who it was recorded by and where, who played on the album, the UPC code, label name, format name, release type, who mastered the album (Carl Saff), the total running time (which is 72:35:11) and the label website address. On the back of the jewel case is a great fluid pointillism design in black. On the CD itself, you will find the track numbers and titles for all 17 tracks. Included in the packaging is a printout with the aforementioned information and more. The packaging and presentation are pretty cool and different. I really liked having the printout so that I could learn more about the release without having to go search online.

Now for the heart of the album. Interestingly, the album was written and recorded during the design and construction of a race car at the Center for Automotive Research in Columbus, Ohio, where the band is based. Their main studio for live instruments and vocals was “underneath a sectioned steel floor in a heavy-duty chassis dynamometer facility. Accessing the underside of the floor required a forklift to move one of the floor sections. This confined space was affectionately referred to as “the hole”. The album also showcases CNC mills and lathes, robotic welding, pneumatics and other mechanical sonic sources to represent the voice of the machine.” This is what got me interested in listening to the album in the first place. The idea of experimenting with sound in that environment was and is totally appealing to me.

As for the music, I found it unsettling but so very good. If you’ve listened to Lingua Ignota‘s album Caligula, then that album will give you a taste for what to expect on this album. Well, at least for me it did, as this album conjured up the same unease that I felt while experiencing Caligula. It’s definitely not easy listening but it does set the imagination and mind afire. Dustin Rose‘s vocals on this album are something else. He creates this character full of angst and despair. Rose stated that the album is “an indictment of human consciousness” and the band has achieved this on this album. One of my favourite tracks on this album is track 4 ‘numerical control’. The guitar work on this track along with Rose’s vocals mimics the revving of a car engine at one point which I found mind-blowing. The drum work on that track, and all tracks for that matter, is so creative and powerful. Track 4 flows ever so nicely into track 5 ‘mechanism is lord’, another favourite.

A couple more favourites are track 10 ‘his reflection’ and track 12 ‘a room’. The band slows everything down on track 10 and Rose’s vocals are more melodic in execution compared to most of the album up to this point. I wished I had access to the lyrics. Three quarters into the track it seems to end but then starts again with a totally different feel and melody. It was an unexpected surprise, as are each of the tracks on this album. Track 12 sees the band take a walk on the doomier/metal side of things in terms of instrumentation.

I can say more about the album but I’ll just be repeating how great it is so I will end with this: If you want to have your mind blown and kickstart your creative juices, listen to this album.