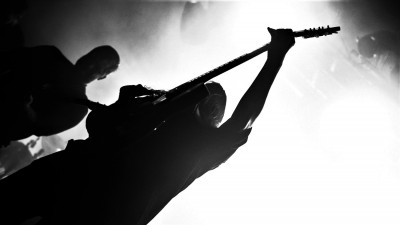 Cult of Luna at Electric Ballroom

You know the venue’s got a club-night on after the gig when the first support is on at six and the headliners finish around ten. Still, it’s great to see that, say, 200+ people made it out for A.A. Williams’ early set, which is a fine demonstration of how far she has risen so quickly. Performing with full band for the first time at Roadburn Festival last year, with keen queues outside the door for much of the set, and signing to Holy Roar records following a string of demos, Williams also brings her moody “death gospel” or “dark folk” sound to a headline show in London in March.

Touring Europe with Cult of Luna clearly must have made develop her fan-base further, and the three-piece’s set tonight seems tight and well-honed. Beginning with a tender acoustic song (‘Control’?), Williams plugs in for the rest of a six-song set that covers big, expansive, near-ambient songs, heavier post-rock atmospheres, and intimate, breathy moments: it’s hard to not to rely on adjectives such as “dreamy”, “soaring”, “moody”, and “spacey”. Williams’ band are excellent, also, with their drummer adding a wonderful array shimmering textures to the songs with mallets and brushes and their bass-player ensuring that their sound has the weight it needs for heavier moments. 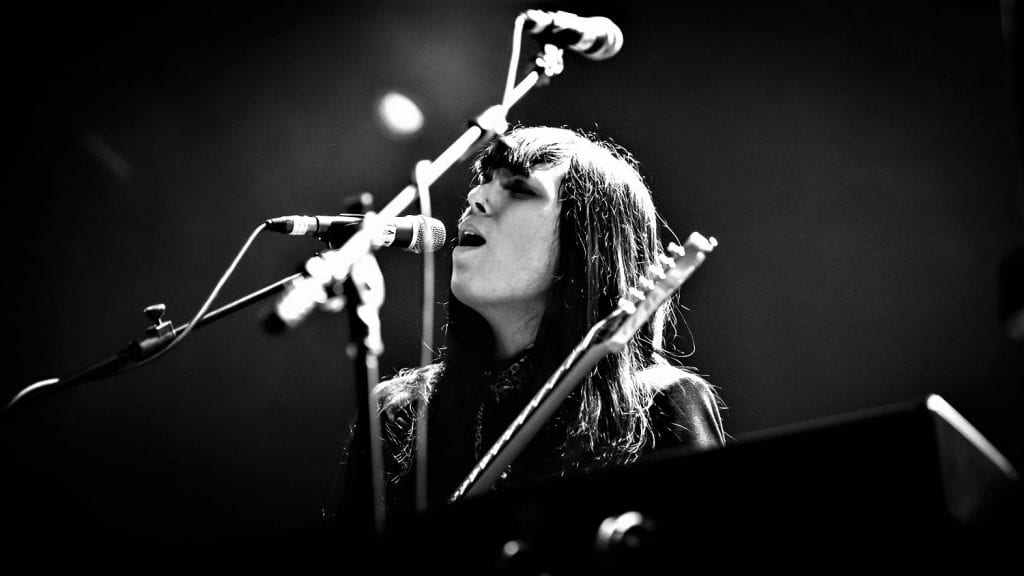 And we do get those heavier moments, with Williams often playing melodic tremolo solos, drenched with echo and reverb, as the soaring climax of the tracks: it’s clear that she’s not an obvious choice for supporting Cult of Luna, yet a perfect one. If names like P.J. Harvey, Chelsea Wolfe, Emma Ruth Rundle, Louise Lemón, Marissa Nadler, Esben & the Witch, or Radiohead excite you then you’ll want to get booking up that Purcell Room show in March. For me, I thoroughly enjoyed tonight’s set and will be seeing them again, hoping that Williams develops to further distinguish herself from the rising tide of wonderful, and wonderfully-promising, artists with a roughly comparable sound.

Brutus, on the other hand, distinguish themselves right from the very first beat. With that name they could be a Swedish death metal band with a thing for the Romans, rather than a Belgian post-(black?)metal, mathcore, art-rock, punkish-prog (I have more…) three-piece loaded with fresh ideas and buckets and buckets of energy. The first thing you’ll notice is singer/drummer Stefanie Mannaerts, who performs that rare feat of distinguishing herself on both instruments simultaneously: you get the impression neither drums nor vocals have been watered down to make this process easier. As with any good three-piece, each member seems keenly aware of the space their playing occupies, with over-lapping rhythms and contrasting parts nicely and carefully arranged. Stefanie’s is a voice that sticks with you, whether she’s light and airy, high and belting, yelling feistily, or – my personal favourite – giving a good old gutsy girl growl like Brody Dale or Courtney Love at their best. 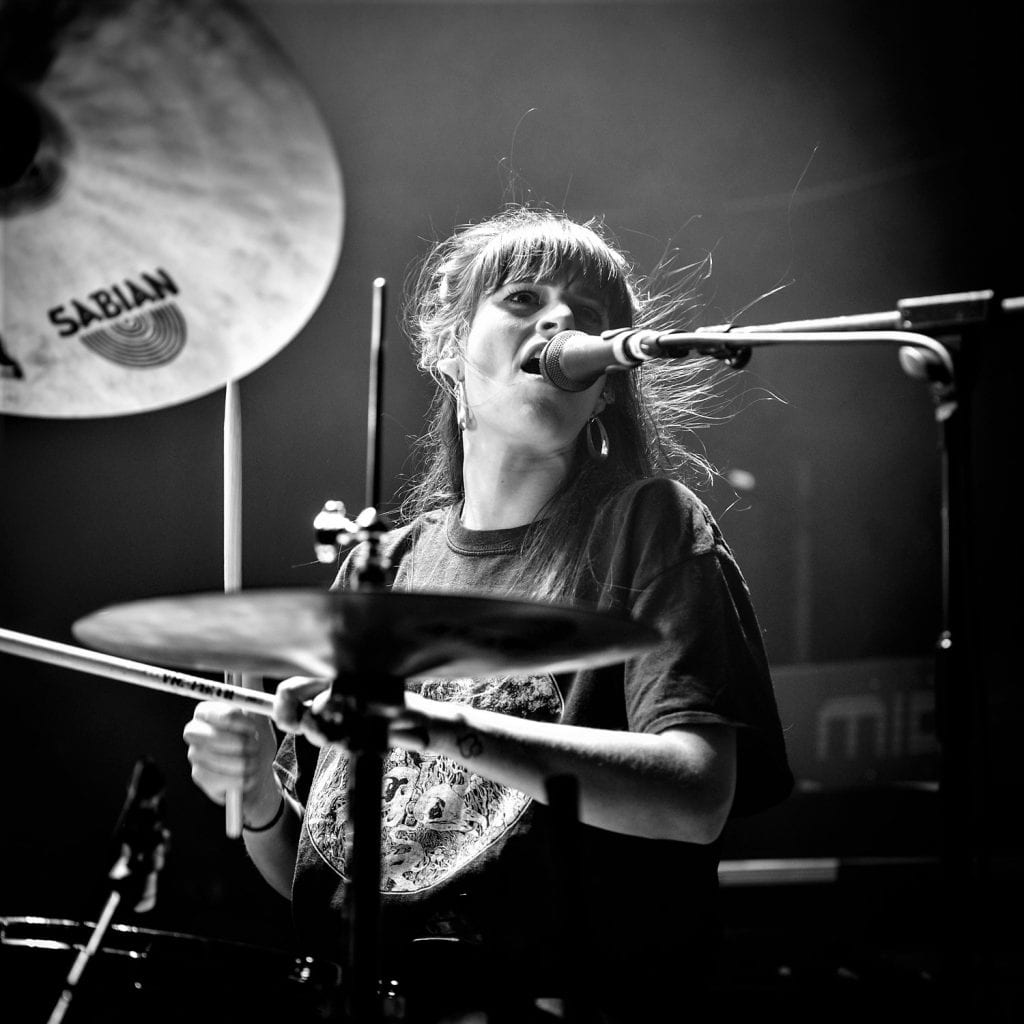 ‘Space’ – all Jay Jayle catchy minimalism, Tool-ish rhythms, and soaring melody – is one of my new favourite songs, as is ‘Justice De Julia ii’ (I think), into the crisp, jagged rhythms and driving chorus of which they fiercely segue. Closing the set with ‘Sugar Dragon’ – somewhere between Alcest, Deftones, and Shellac – it’s clear from that everyone will be singing the refrain “Sugar Dragon/ How I feel your flames/When you say my name” to the merch stand and beyond. Brutus are powerful, inspirational and deserve great things.

Great things have certainly been delivered by Swedish post-metal mavericks Cult of Luna over their 30+ year career, including nine widely inspirational studio albums, three live albums, and some prestigious festival slots. There has been much talk of Mariner, their collaboration with Julie Christmas which they performed live together for the last time at Roadburn 2018 – so I guess some fans might be disappointed that tonight’s set relies on latest album A Dawn To Fear, 2013’s Vertikal, and 2006’s Somewhere Along The Highway. Actually, I don’t think any one of the heaving mass of excited people in here tonight is disappointed at all, as Cult of Luna launch into ‘The Silent Man’. Having just heard two three-pieces, there’s no doubt COL are a six-piece band, with their layered and polished sound coming across as well as the Electric Ballroom can provide – which is actually, frustratingly, not quite as well as you’d like unless you’re in the front third of the room. That’s often the way it goes here. But, despite this, it’s certainly a well-crafted sound, with the occasional slide guitar melody, cyber-synth transitions, or repetitious clap-hat drum patterns, familiar from dance music, tucked neatly between huge slabs of sludge-heavy power chord and bowel-loosening growl. 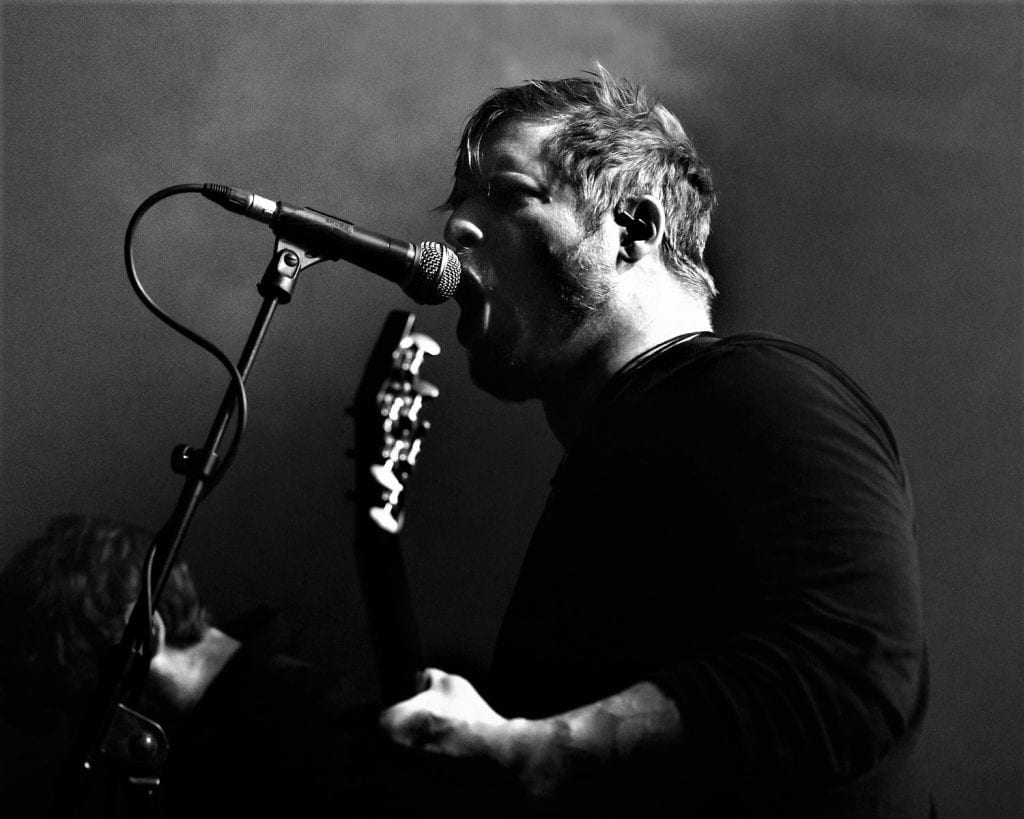 I must confess that I don’t know a lot of their new material as well as, say seminal clean-yet-crushing album The Beyond from 2003, so I’m not able to follow as intently as the fans around me who respond to every drumbeat, chord and crescendo with genuine glee. And that’s partly why – despite knowing that I’m watching a good band play a good show – around the thirty-minute mark, I’m not getting blown away exactly. Having said that, all six members exude passion and energy, and there’s a warmth and emotive pull that is core to the COL sound which does translate very well to their live show – and this does grow on me as the set progresses.

What I really like about COL is how well they play the quiet before the storm, the steady rise and the heavy drop, the brooding swell and the tidal wave – in other words, the essence of the post-metal sound that they laid the foundations for. About half way through I’m pretty sure we get ‘Lights on the Hill’, essentially built upon such a formula, with slow, steady clean-washed passages getting gently dirtier until the wave finally breaks over us in a crescendo of glittering heaviness and I’m finally starting to understand how good COL can be. By the end, we’ve heard a couple more tracks with these quiet semi-acoustic sections, some dusky western twang, and some slightly looser, clean-finger-picked passages – sounding a little less perfect, played with a little more grit than some of their more processed moments – so that the closing track from A Dawn to Fear is allowed room to develop into something so heavy that it seems to coalesce Cult of Luna’s entire set into a powerful undertow of sound which drags us all – yup, me too – under. 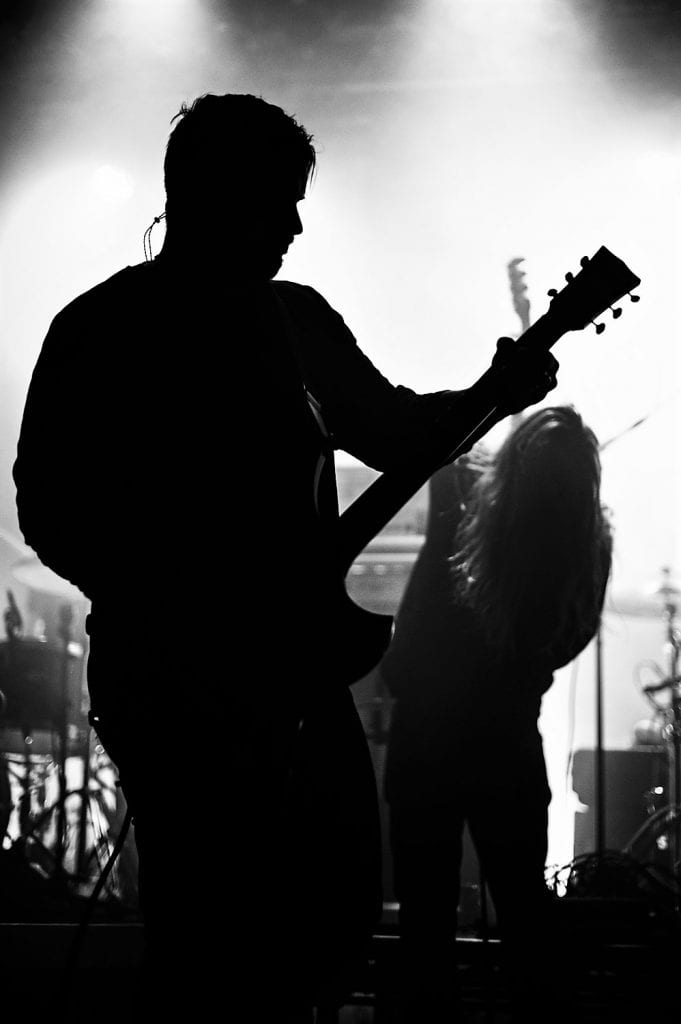