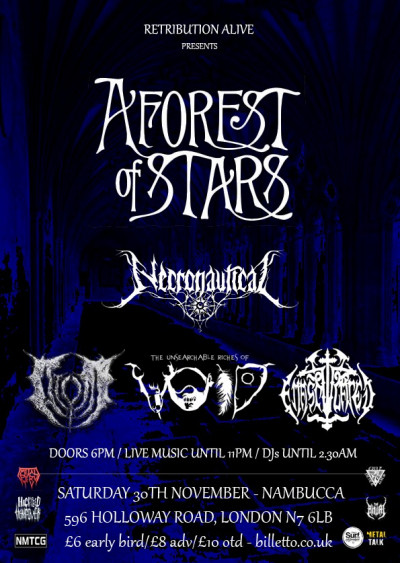 A Forest of Stars at Nambucca

. . .and I arrive to a last song wild chaos-barrage of death growls, cavernous bass, splendidly drunk people collapsing, head-down-banging and frantic soloing like it was going out of fashion. And that wasn’t the improvised black metal band (openers Emasculated Christ) whom I unfortunately missed: that was local lads ATVM, good people, and all I can tell you is that we should all probably be seeing them more.

Terms like avant garde and progressive only just begin to describe VOID, with whom I’m much more familiar and of whom I’m pretty damn fond. Both VOID shows I’ve seen before focused on the songs and overarching aesthetic of their 2017 EP The Unsearchable Riches of Void which first got me hooked, with its apocalyptic cyberpunk narratives of a weird dystopian London, through which walk masked ritualists to the (blast)beat of gonzo. blackened death-grind and skewed samples from Fiddler on the Roof and Trump.

Now, only a folk horror mask hanging at the side of the stage reflects that era, an occult anachronism.

Pared down to smart black, shaved heads, splashes of pirate jewellery, moody hoodies, VOID blast through early tracks including ‘Zero Signal Pattern’ and fan-favourite ‘Ego Tranquilizer’, alongside three new, long tracks from their forthcoming third album, The Hollow Man. If you’ve seen them before then you’ll also be waiting for a chilling change-of-pace that takes place in the middle of ‘Ego’ where frantic black metal drops to a woozy break, delivered with eerie menace by vocalist, Levi.

VOID’s forthcoming third record The Hollow Man is “a concept album breathing urban dystopia and existential despair, inspired by T.S. Eliot’s poem ‘The Hollow Men’”. Celebrating the re-release of Frances Ford Coppola’s masterpiece Apocalypse Now on August 27th 2019, VOID released a teaser trailer, setting Marlon Brando’s reading of Eliot’s modernist classic from the film’s outtakes to new musical snippets. Based on tonight’s performance, my impression is that the new material will continue to be as surprising and innovative as ever, but with a new kind of gravitas, as befits the ambition and aspirations of the project.

A huge shout-out to tonight’s DJ for blaring out Urfaust and Enslaved, as well as the unbearably loud noise barrage at one point. Have they mangled the production on Deicide so that it’s unrecognizable? No, no, no, that was an actual noise track coming up louder than the others: ho, ho, ho!

With Abbath-style facepaint, candelabra and an only faintly-legible banner logo, Necronautical are orthodoxy bookended by black metal heresy. Hailing from Northwest England, Necronautical bring with them parts of the Swedish melodic sound, some of the intricacy of Emperor, and the black-and-roll of Satyricon, as well as plenty from the rest of the second-wave Norwegian bands. Amongst razor-sharp tremolo, vibrant guitar lead and a sense of strong songwriting, Necronautical frontman Naut combines a varied array of rasps and growls with occasional clean tenor styles, which ensures that they’re an eminently watchable band. While I don’t know their material in depth, I know that we get ‘The Endless Spiral’ and the epic title-track from 2019’s Apotheosis, the latter of which is a personal favourite with its clean, finger-picked open chords laying the foundation for a synth-soaked melodic climax worthy of Dimmu Borgir at their most grandiose.

Next up is a group insistent upon dragging us back to the violence of the Victorian era. No, not the British Conservative Party, but something far more rewarding and progressive: Yorkshire’s A Forest of Stars. Tonight is the fourth time I’ve seen them and they’re always an exciting band to watch, even if the small stages of the Black Heart and the Boston Music Room leave this seven-piece band a little cramped, both sonically and physically. So I’m delighted to see them on the wider Nambucca stage tonight, which provides a broader space that is almost commensurate with their lofty artistic ambitions. And A Forest of Stars – wrapping psychedelia, black metal, folk music, and prog rock up in a kind of skewed Neo-Victorian package – are certainly ambitious and, like VOID, have always aimed for a complex yet coherent aesthetic that unifies the band’s disparate elements, which Stars largely achieve, even if it can be pleasantly muddled at points on record.

Playing a career-spanning set that takes in ‘Thunder’s Cannonade’ and ‘Summertide’s Approach’ from 2010’s Opportunistic Thieves of Spring, ‘Prey Tell of the Church Fate’ from 2012’s A Shadowplay for Yesterday, ‘Drawing Down the Rain’ from 2015’s Beware the Sword You Cannot See and ‘Precipice’ and ‘Child Night’ from 2019’s Grave Mounds and Grave Mistakes, tonight is easily the best live sound I’ve heard from them so far. If the violin sounds a little too loud at points, it does fit with the more string-led songs on their latest album. And, speaking of strings, is takes me a few songs to notice that they have a body-less electric cello on-stage too, thickening Katheryn’s fine Gaelic-infused violin parts. It definitely seems that The Gentleman – as thoroughly polite as his moniker suggests – largely on keys tonight, directs the band, keeping this ensemble of musicians together, while Mister Curse rasps his surreal, decadent poetry like a Dickensian cut-throat who escaped the asylum. Stars play a tasty new song, before giving us a classic, ‘Female’ from their 2008 debut The Corpse of Rebirth to conclude.

As I hope this account makes clear, tonight was nothing less than a showcase for the vibrancy and innovation of both the UK Underground scene in general, and the London scene in particular.