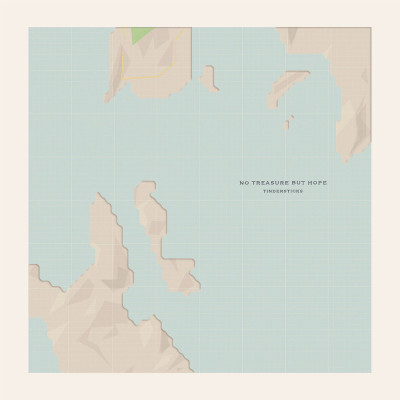 No Treasure But Hope by Tindersticks

To the untrained ear, Tindersticks are miserablists, a maudlin mob of musicians moping their way through minor key melodies and misanthropic morosities. Theirs is, the common conception goes, the path of gloom, soundtracking loneliness, heartbreak and vicissitude. Part of that misconception has come from the lugubrious tempo of both the band’s creations and their frontman Stuart Staples’ vocal style. Tindersticks lyrics are not so much sung as dripped into the memory, all plump and velveteen, drenched in emotion and, more often than not, corpulent with despairing desire.

No Treasure But Hope‘s opener, ‘For The Beauty’, seems to do little to shake off the misapprehension, heavy as it is with pregnant space, unspoken wishes hanging between Staples’ voice and Dan McKinna’s coaxing piano. But within it, in the sparse guitar of Neil Fraser and ghostly build of Earl Harvin’s drums, lies light in the tunnel and of, as the album’s title promises, glimmers of hope.

What follows is, by Tindersticks’ standards, something of a carnival ride of upbeatness. It could be that the speed at which it came together, five weeks from first rehearsal to mastering, that gives the album a vital energy or perhaps it is a simple continuation of the reinvigoration the group has experienced in recent years, spurred on by solo projects and film soundtracks.

Whatever the reason, it is a look that suits them and it brings with it a fine selection of songs, which build through warm surges like ‘Trees Fall’, ‘The Old Man’s Gait’ and ‘Tough Love’ and peaks wonderfully on the swaying funfair of ‘The Amputees’, the delicate caress of ‘Take Care Of Your Dreams’ and the dreamy afternoon waltz of ‘Pinky In The Daylight’, the band’s first ever out-and-out no-heartbreak love song.

No Treasure But Hope is not quite the masterpiece it could have been – the ill-judged world music staccato of ‘See My Girls’ puts paid to any notion of perfection – but it is an album unexpectedly filled with musical joy and, despite what the title suggests, sparkling riches.