(((O))) Review: Stick In The Wheel – Against The Loathsome Beyond 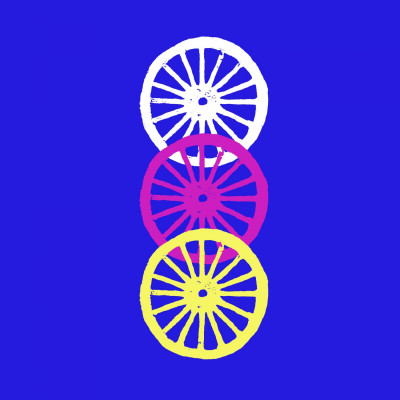 Against The Loathsome Beyond by Stick In The Wheel

It’s grim outside. Cold, wet, ill-tempered. Here is a gift on the lip of the bleak season. Against The Loathsome Beyond offers us deep connections, new growth on old roots and protective oaths as we enter the dark months. Its none-more-black-metal title is taken from ‘Nine Herbs Charm’, a thousand year old spell to cast out poison. Recited here by vocalist Nicola Kearey amid murky atmospheric rumblings from out of which a deep pulse grows into an insistent mechanical beat. This entwining of ancient and modern is explored throughout the tracks here and, if that might seem fraught or unpromising on paper, they bring a light alchemical touch to their materials with enchanting results.

It’s not much more than five years since Stick In The Wheel first started to make their voice heard. Some of you will already know that they’re among the more fascinating and provocative acts currently working in the UK. They combine often stark arrangements with a surprisingly broad sound palette and a bracing directness in their presentation. Against The Loathsome Beyond is their sixth full length release and neatly divides their work thus far in three. There are two, excellent, albums proper and two volumes of From Here, a field recording project in which they travel the country capturing intimate performances by other folk artists. Volume 2 came out last spring and featured Rachel Unthank, Richard Dawson and June Tabor among others. Pulling both impulses towards the third point of the triangle are their mixtapes of which this is the second. These offer looser collections of collaborations, remixes and more experimental approaches.

Appearing both on From Here Vol 2 and again here is guitarist C. Joynes. He joins them for a version of ‘Georgie’, a woman’s tragic lament for the life of her love due to be hanged. A fairly straight reading that leans into the song’s desperation. In contrast there’s also a Stick In The Wheel remix of ‘Sang Kancil’, from Joynes’ 2019 album with The Furlong Bray, transforming it into a something bright and hypnotic, an infectious groove that sounds like a gamelan banger. The other collaboration features Jack Sharp & Cinder Well on a reading of alliterative middle english poem ‘Swarte Smiths, Smateryd wyth Smoke’. They wrap it about in damp drones, like mist off the Thames, punctured by the harsher tones of Kearey’s accent.

Now then, it would perhaps be misleading, but equally it would not be untrue, to call this a Christmas record. I know the very thought of such things is enough to give some of you an attack of the vapours, so just take a moment to calm yourselves. The first two tracks here form a nominal double A side single casting a pair of Middle English Carols in contemporary settings. Neither come from the overplayed list already sparkling brightly from supermarket Tannoy systems. Indeed, the seasonal implications are not immediately obvious. ‘Down in Yon Forest’ seems to find Nicola wandering innocently into Demdike Stare’s ‘Forest Of Evil’, it pulses with supernatural currents and unseen threats hidden among the trees. A version of Corpus Christi Carol the lyric I expect is older than the one you might know from Shirley Collins or even Mark Lanegan’s versions, lacking the references to ‘bells of paradise’ and ‘my lord Jesus’ and focussing on Mary and the song’s series of arcane images. Another, more traditional, instrumental version bookends the tape.

‘Drive the Cold Winter Away’ is brighter, if frosty, an almost nordic electro setting of the tune with a soft, pure vocal smudged just slightly at the edges with auto-tune. It’s beautiful, as much a modern pop song as a restoration carol. An unlikely blend they make entirely natural. It isn’t a new observation to remark that modern urban musics are forms of folk music, even as they generally remain remote from tradition.

Stick In The Wheel’s rare success in combining modern production techniques with an ancient songbook is probably due to being equally rooted in both. Although, they also possess a keen minimalist impulse that resists or strips away unnecessary ornament leaving their versions spare and honest. At the top I said you should consider this a gift, but Against The Loathsome Beyond is more than a gift, it’s a stocking full. Each track a treasure to be unwrapped and admired with more to offer than first appears.