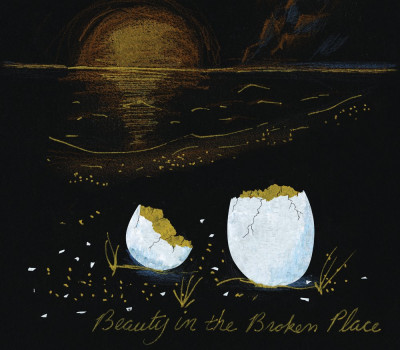 Beauty In A Broken Place by Populuxe

If the music has melody and hooks, borders on ‘pure pop’, it can’t be serious, can it?

Well, not really. First of all, trying to say something within the confines of a three-minute or so song that has to stick to the strict rules of pop is probably one of the hardest things to do in modern music. Injecting a lyrical theme that includes a message, or a more detailed view about something, anything, to quote Todd Rundgren is even harder.

That is where three guys that go under the name Populuxe come in with their latest album Beauty In A Broken Place. Rob Shapiro and his guys try to tackle the ongoing spat of mass violence, for Shapiro triggered by a massacre that occurred in the Tree of Life Synagogue in October 2018, when 11 people were killed and 7 injured.

To all that, Populuxe foil that in music that was obviously inspired by the early 70’s sounds of the likes of the aforementioned Mr. Rundgren (say,’Marchers’), but also Stevie Wonder and Curtis Mayfield (‘Walk In The Sun’), a bit of heaviness of Led Zeppelin and prog leanings of Frank Zappa and King Crimson (‘The Gathering Storm’).

Sounds too much? After all, Beauty In A Broken Place with its 19 tracks is structured like some sort of rock opera (shades of The Who’s Tommy and Quadrophenia). Sure, on paper, but Shapiro and the guys come out of a possible disaster completely unscathed, for simply two reasons – you can listen to their ‘pop music’ on its own merits (try The Beach Boys circa early Seventies of ‘Leaves On The Ground’) and think about what their message is on its own level (“Pretty soon the dam’ll burst. Because it’s only getting worse. You wanna put your people first. And then you’ll hear ‘em saying we’re all marching on” – ‘Marchers’).