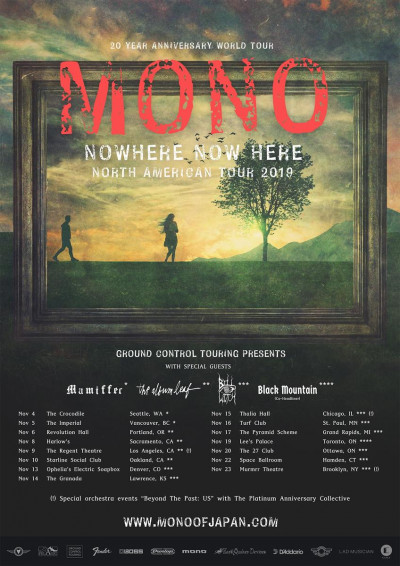 I got to the venue an hour before the doors opened. I know, too early but I couldn’t help myself. I was too excited to wait another 30 minutes to leave my house. On the way, I picked up a friend who was going to the show as well. When we arrived at The 27 Club there was already one other person waiting to get in. It was cold outside but bearable. It’s still technically Fall but the snow and cold temperatures have already hit Ottawa. As we waited, another person joined the line-up then another. At one point Tamaki (bass, piano) walks by! No one else seemed to realize this. Then a man stopped to ask, “who’s playing tonight?”, so a discussion about MONO and the genre ensued. That was cool.

Soon there was a long line of people waiting and the doors finally opened. Merch tables were set up to the back left and right of the venue. I needed to buy a MONO LP so I went straight to the MONO merch table. The person in charge of the merch was super. Very personable, it felt like we knew each other for a while. The good vibes continued.

When instrumental rock bands come to Ottawa it usually brings out all the Ottawa bands that also play instrumental music. The MONO show was no exception. Not even 10 minutes in and I was already saying hello to other fellow musicians. It’s often a reunion of sorts.

About 30 minutes after doors opened, Bell Witch take the stage. If you don’t know, Bell Witch are a doom duo based in Seattle made up of Dylan Desmond (bass, vocals) and Jesse Shreibman (percussion, Hammond B3, vocals). They took the stage unassumingly, quietly and Dylan started playing. Their set was intense but calming. It literally felt like being at church. Their music spoke and the audience had its attention, they definitely had my attention. At times, I felt somewhat uneasy. Almost like I was going to be sick but not quite. It was a crazy feeling and it was usually brought on by Dylan’s lower bass notes. The duo’s playing was controlled and fluid. At the end, they left me satisfied and ready for MONO.

During the gear change, the venue seemed to fill up even more. I had left my spot at the front of the stage to say hello to a few other people and I had to quickly get back to my spot. It was a sold-out show after all.

Like Bell Witch, MONO also took to the stage quietly. The crowd welcomed the band with claps and cheers. The track they started with was ‘God Bless’ and they ended with ‘Com​(​?​)’. Half of the set-list included tracks from their tenth studio album, Nowhere Now Here and the other half were tracks taken from five of their various other releases. It was a great mix. I hoped that they would have played ‘Yearning’ but I was happy nonetheless.

As it usually happens, both Taka and Yoda were sitting for most of the show until the very last song where they both stood. When they both stood, you knew something good was coming. It was awesome to have heard Tamaki sing on ‘Breathe’; it was just as awesome live. It was also great to see and hear Dahm play behind the kit for the first time. He even had a gong, which was pretty cool.

In between a couple of their songs, a man standing right beside me yelled, “Thank you for keeping rock alive!”. I happened to be wearing a t-shirt that stated in a larger font, “Rock is Dead”, then in smaller font, “and paper killed it”! I wondered if he had been annoyed with my shirt and wanted to defend the state of rock ‘n roll in the name of MONO. Too much of a coincidence? I was overthinking things, but I digress.

The band played seamlessly, flawlessly and beautifully. They played each track like it was a treasured friend. Each one was more precious than the first. I found it fitting that they started with the newer tracks and ended with the older tracks. Both an homage to their legacy and to their fans. While they were playing, I couldn’t help to think about the fact that they have been together for 20 years. Touring, writing and recording emotive music for 20 years! It’s incredible and incredibly beautiful when you think about it. It was an emotional night.

By mid-show Taka finally addressed the crowd. He thanked the crowd for making it a sold-out show and for helping them celebrate 20 years of being together. Near the end of ‘Com​(​?​)’, the band started leaving the stage. First Dahm, then Tamaki. Yoda and Taka left us with a chorus of distorted feedback, and one of the roadies had to come onto the stage to turn off the amps.

They have a few more shows left on their tour. If MONO is coming to your city I recommend going to the show. You won’t be disappointed. 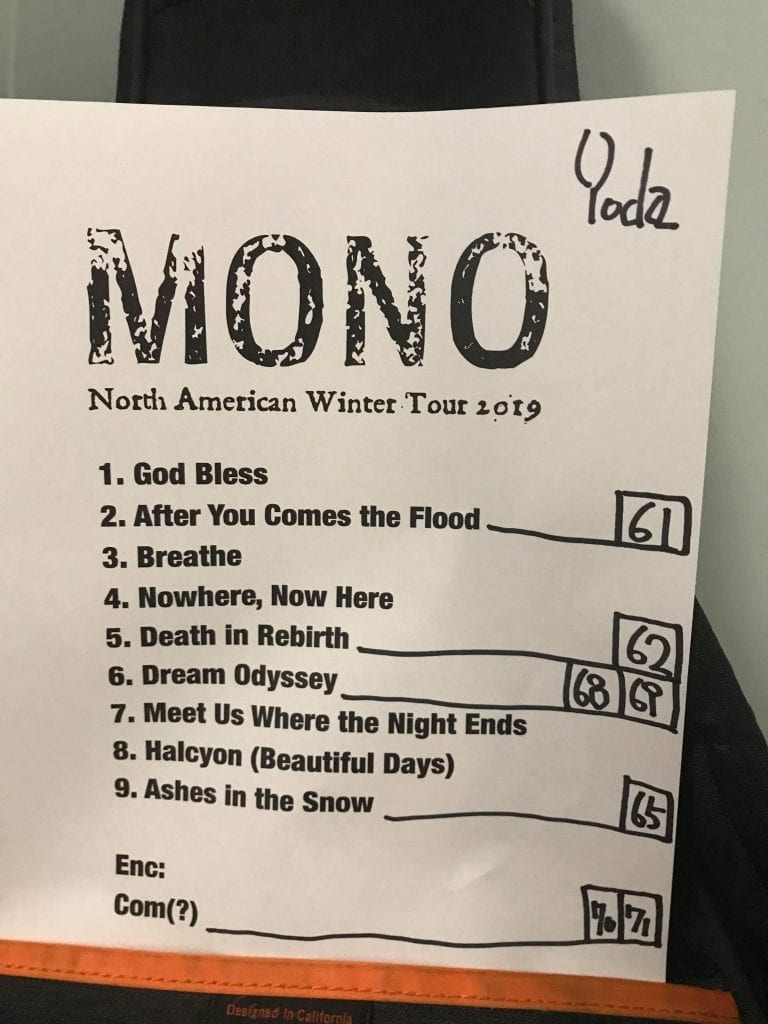