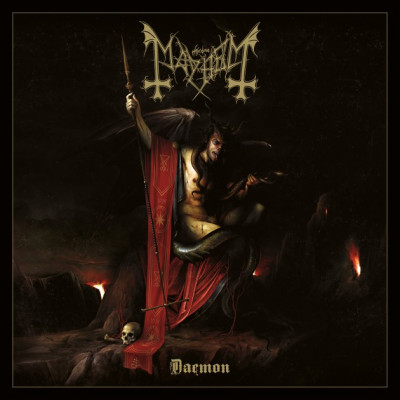 In a fresh twist to an already pretty twisted story, Necrobutcher – founding member and bassplayer of Mayhem – recently revealed that he too was on his way to kill Euronymous. If only that pesky Varg hadn’t got in the way first. Another shocking revelation in the on-going narrative of one of the world’s most controversial bands? Merely a cheap publicity stunt? Bit of both? He certainly looks pretty serious in the video interview. Whatever your opinion on this (you’re sure to have one if you’ve got this far) it’s certainly hard to deny that Necrobutcher’s revelation was certainly well timed. Following a batch of classic-era live releases, as well as a lavish recent live recording of their best and most infamous album (De Mysteriis Dom Sathanus of course) over the last few years, Daemon is Mayhem’s sixth studio album, the first in five years.

Esoteric Warfare from 2014 was a strong album, mainly written by then-new guitarist Teloch, which I’ve returned to many times since. The stamp of a fresh musician’s input was clear, sounding in many ways more like the classic Norwegian black metal sound than the band had for years, yet also their closest to blackened death metal. The production was a lot clearer and more polished than 2007’s Ordo Ad Chao (which saw vocalist Atilla Csihar return to the band) and the music much less progressive and experimental. Mayhem are always going to be punished for not cranking out endless versions of Mysteriis, but that’s also part of the reason why a lot of people, such as myself, have stuck with them over the years. If people complained about the experimentation and occasional slower-pace of Grand Declaration of War (2000), they liked the rawer, more traditional Chimera (2004).

So if you liked the classic, cold Mysteriis sound, then chances are you’ll dig Daemon which smashes straight into the classic black metal style, but with the production of modern Mayhem: a clean, relatively-high mix wherein each instrument can be clearly delineated; a highly polished, precise and tight performance, yet an aura of violence, a feeling of controlled chaos. Performed by the same band as Esoteric (completed by long-term drummer Hellhammer, and former Crade of Filth guitarist Ghul [Charles Hedger]), they’re going for a more grandiose, archaic timbre than the modern brutalism of Esoteric, with everyone contributing to song-writing this time. “Everyone was welcome to throw things in this big pot of evil-spawning puke,” Teloch says. “Instead of one person writing music and the other lyrics, we all now tried to throw in whatever we had.”

Well, the result is good but it’s not breath-taking.

Part of the problem is that there are so many black metal bands around these days, and so many excellent bands who are really pushing the envelope. Clearly the vast majority of them would not be around if not for Mayhem. I’m listening to Daemon and can’t help but hear the presence (if not the influence exactly) of Mayhem’s successors and wondering what exactly I expect from Mayhem nowadays: it’s not as jagged, aggressive or dissonant as Misþyrming; not as weirdly avant-garde as Blut Aus Nord; and not as generally next-level awesome as Behemoth. I guess I feel ambivalent about returning to something like the classic Mysteriis sound, when they’ve spent so long progressing in other, more original directions. But it does still somehow sound very much like Mayhem, which I guess is all we really ask for.

‘Agenda Ignis’ is memorable for its brief bass drops, excoriating riffs, unpredictable drumming, and evily-snarled paeans to Lucifer. ‘Bad Blood’ is fast and nasty, business as usual, with an Enslaved-like rasping growl. By the fourth track ‘Malum’, it’s picking up nicely. There’s a catchy, epic intro reminiscent of recent Watain, a drop to punkier, buzzsaw guitars that harkens back to the Deathcrush era, some of Atilla’s most dramatic, throatiest singing, and a nasty coda. ‘Falsified and Hated’ is powered by an anger commensurate with its title, again broken up with those brief mid-tempo bass breaks they do so well, and is flavoured by some neat synth noises, ironically like Filosofem-era Burzum; it’s a stand-out track with a sound that I wished they’d played around with further elsewhere on the record.

But even Atilla going all-out on his intonation of “Preparing for war/Against the gods/Ultimate blasphemy/Captured and imprisoned” unfortunately can’t make a solid song like ‘Worthless Abominations Destroyed’, the album’s first single, into a classic. As Teloch explains, Esoteric was “strictly a concept-themed album”, dealing with cyber warfare, genetic super-soldiers, cosmic horror, and governmental mass-manipulation, which felt topical and made a change from death, satan, war, death, satan, war. As its title suggests Daemon returns to topics of darkness, Biblical evil, Satanism, decay, death, etc. – entirely predictable topics, albeit depicted with a certain panache both lyrically and visually.

It gets better. Track 8 ‘Daemon Spawn’ is like Atilla fronting Behemoth playing tracks from Chimera. ‘Of Worms and Ruins’, the second single released from Daemon, is a stand-out track: a short and nasty mixture of tight, searing tremolo riffs, ornate pull-offs and scrabbly, messy violence. ‘Invoke the Oath’ invokes Watain again, is distinguished from the rest of the album by the use of resonant kettle-drum sounds, but fails to provide a suitable climax to what must be deemed a rather patchy sixth album. That said, anything Atilla is involved with is worth listening to, and it’s very often the vocals that really make a lot of the tracks on Daemon. Everything you’d hope for is present: the gurgly, throat-infection growls; the fucked-up Gregorian intonation in a sinister tenor; the high-pitched Nazgûl shrieking; and plenty more that’s less easily described. It’s also Necrobutcher’s bass that makes the Mayhem sound, providing a warm heaviness, harmonic underpinning, and nasty rawness that is often lacking in the low-registers of black metal’s frostbitten, reverby treble-fetish.

I’ll probably buy Daemon eventually, partly because I’m a bit of a completist, and partly because I’m hoping it’ll grow on me. For a band that emerged into the world over thirty years ago, Mayhem are still controversial, challenging, impossible to ignore and their music still captures the essence of the nasty old Norwegian black metal that it always has. But, while Daemon is a good black metal album, and better than most, it is still only quite good for a Mayhem album, and we know they’re capable of more. Bottom line is: I’m sure it’ll slay when they play it live.