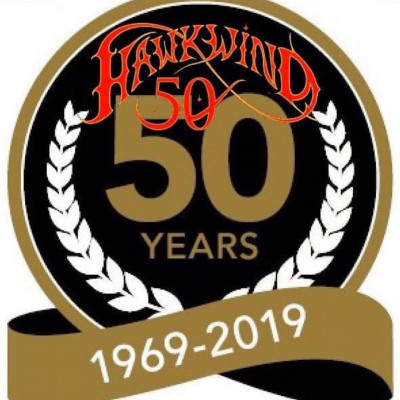 Hawkwind, formed in 1969 by Dave Brock, legendary space-rockers and influencers of generations of bands, are 50 years old.
Fifty.

Beloved of punks and crusties, metal-heads and progsters, hippies and hipsters¹, folkies and stoners, Hawkwind’s psychedelic light has waxed and waned and waxed and waned across these five decades, but it never quite went out. Hawks came and went, dozens of them. Some went and came back. Some, sadly, are no more. There were legal battles and name changes. They had a hit single. Some of their records were genuine genre classics, some. . . not so much. And here they are, 50 years a band, back in Edinburgh.

The first time I saw Hawkwind, I was 16 and they were seven. Usher Hall, 1976. My first ever gig. The first band I ever went full-on fanboy for. They were touring the Astounding Sounds. . . album, I think. There was little left of the Warrior on the Edge of Time line-up. Brock was still there but Lemmy had just gone, Robert Calvert was back in as permanent singer, and they were spectacular.

I would go to see them every time they came to Edinburgh – maybe 15 times in all – until Chronicle of the Black Sword tour, after which things got in the way and I lost sight of them. I caught them a couple of times in the Noughties, but I couldn’t recapture my previous enthusiasm. They seemed like. . . almost like a Hawkwind tribute band. And they played ‘Flying Doctor’. I really, really don’t like that song.

Anyway, let it not be said that I don’t have an open mind. They are the band that has had, by far, the biggest influence on my musical taste, and I’ll be happy for them to convince me once more. Here we go. . .

Tonight’s gig is sold out. There’s even a few sad looking punters hanging about outside in the cold and the rain¹ª, begging for tickets. Good luck to them. Inside, the auditorium is filling up, and it’s nice to see a decent crowd in for the support band. How The Blackheart Orchestra will be received remains to be seen.

It all starts well for the Manchester duo. Multi-instrumentalists Chrissy Mostyn and Rick Pilkington do a hard-to-pin-down sort of alternative electro-folk thing, and do it rather nicely. Their sound veers from charmingly wispy to bombastic, with Mostyn doing most of the singing. Her voice is oddly child-like, in a Kate Bush kind of way without sounding at all like Kate Bush. If you see what I mean. 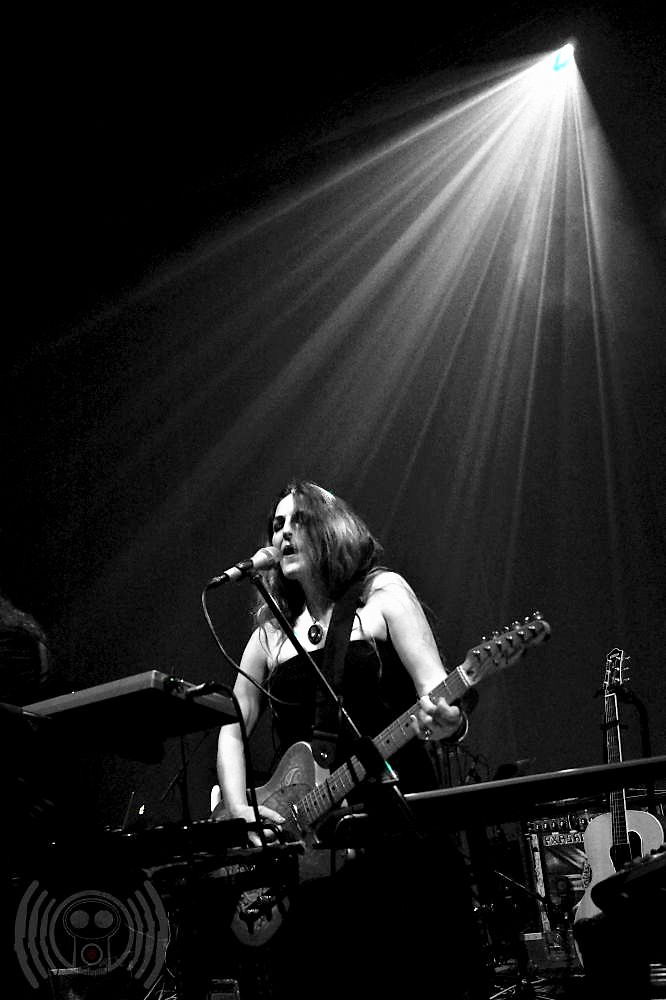 There’s a lot of instrument swapping going on, with acoustic and electric guitars, bass guitar and assorted keyboards and electronic gizmos putting an appearance but, sadly, they struggle to hold the partisan crowd’s attention for more than a few songs. The conversation level rises, and there are even a few shouts of ‘Rubbish!’ and ‘Shite!’. Rubbish and shite they are definitely not, and the pair just shrug, smile and carry on. Still, it becomes difficult to actually hear them over the crowd noise, and the obligatory “We’ve got CDs at the back. . .” call seems unlikely to bear much fruit tonight.

The crowd knows what it wants tonight, and it isn’t The Blackheart Orchestra. They finish up and depart to a small wave of applause and a great deal of indifference. They deserve better.
Yeah. That crowd. . .

I’m clearly dead cool and that, so I’m used to being “that old guy” in a room, and it’s quite strange to be, for a change, one of the more youthful members of an audience. Considering that Hawkwind have been around for half a century, perhaps it’s not unexpected that the crowd is formed almost entirely² of well-padded ‘mature’ gents with more hair on their chins than on their heads, and most of that gone grey. Tonight, everybody looks like me²ª.

In years (decades?) gone by, Hawkwind stages have been enhanced by some impressive structures – the Atomhenge set, the Black Sword fantasy landscape, etc – but tonight there’s none of that. To be fair, The Queen’s Hall is the smallest venue I’ve seen them play, and the stage is relatively tight; but all I can see is a projector, a huge screen³, some banners with album cover art, and a pair of what I presume to be laser generators. Let’s see what they can do with that. . .

The music and lights go down and Hawkwind amble on. In all the years that I’ve been watching them, they have never – with the possible exception of Calvert – been a flamboyant band, letting the show do the talking. No spotlights. And so it is tonight. 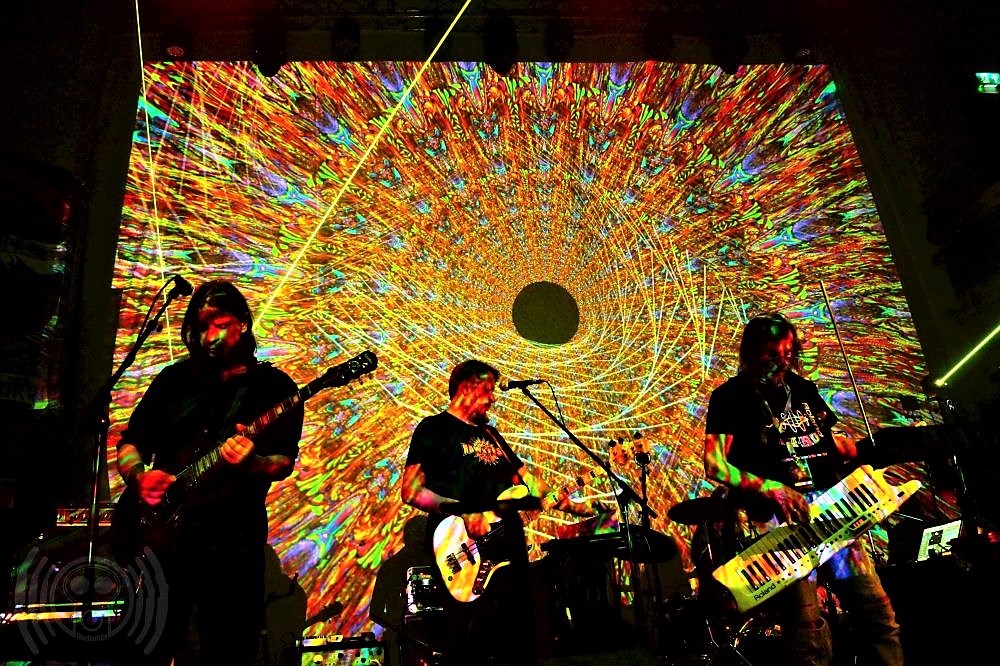 The minimal stage set-up, though, when it fires up, is spectacular. Multicoloured lasers stab and slash and sweep the room, and the big screen explodes with kaleidoscopic, swirling mandalas, geometric figures, futuristic cityscapes and spacecraft.

Brock apologises for sounding a little croaky, and they set off into a sturdy crowd-pleasing ‘Motorway City’. As this is their 50th Anniversary tour, we are expecting a hefty set of “greatest hits”, but they’ve also got an album – All Aboard the Skylark – to promote, so they follow on with a couple of fresh new tunes ; the grisly ‘Flesh Fondue’ and ‘The Last Man on Earth’, a dystopian sequel to ‘We Took the Wrong Step Years Ago’ from the In Search of Space album.

There’s a quick visit to poetry corner for Calvert’s ‘Song of the Gremlin’ and then things properly kick off with a thunderous, pummelling mash-up of ‘Born to Go’ and ‘You Shouldn’t Do That’. This is what we’ve really been waiting for, the “real” Hawkwind of throbbing hypno-bass and metronomic drums. Visiting synth man, Tim Blake, provides the swirly and swooshy noises with his theremin. If we close our eyes, we can easily imagine that hairy noise-generators, Del and Dik Mik, are back in the house. All that’s missing is the heady aroma of “herbal” cigarettes, a sad casualty of the otherwise welcome smoking ban. 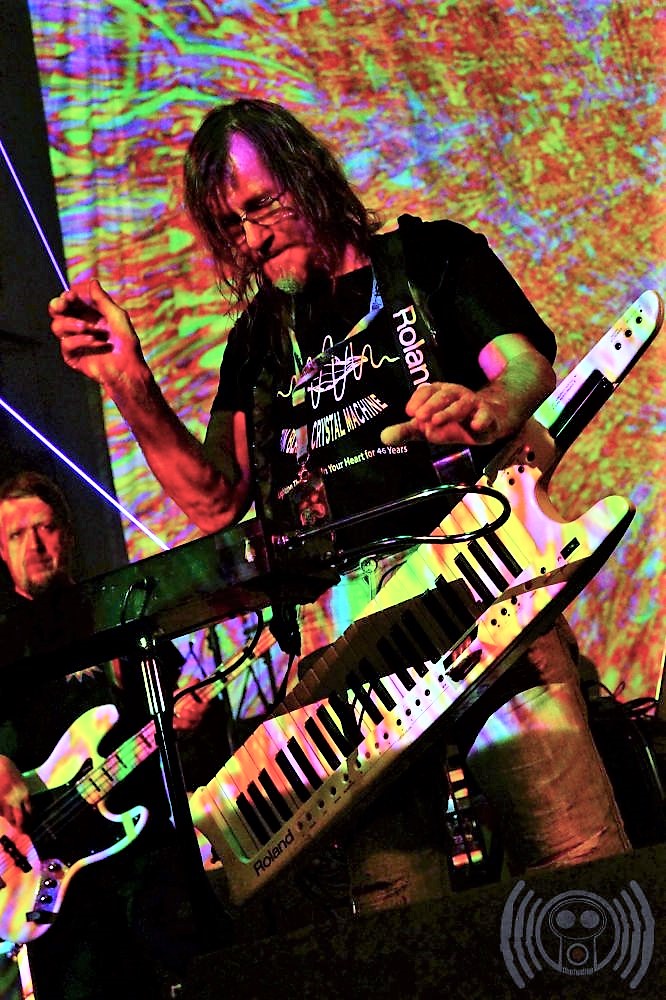 Another new song next, ’65 Million Years Ago’, the sad tale of the extinction of the dinosaurs. I’d heard this on the radio a couple of nights ago – a BBC Radio 6 live session – and I’m interested to see it done on stage where I can feel it as well as hear it. It’s. . . OK. It runs on into an almost post-rocky ambient instrumental ‘In The Beginning’, which is nice, and then it’s one of my all-time Hawkwind favourites, ‘Spirit of the Age’, as good as it ever was.

Following the new song with a scintillating ‘Spirit of the Age’ highlights my main gripe with Hawkwind these days³ª: I can’t fault their enthusiasm or their skills as musicians, but the new songs are simply not as good as the oldies. Perhaps it’s only my unfamiliarity with the new stuff, but it seems. . . clunky. It seems to me that the new material lacks the hypnotic drive, the weirdness, the head-stretching trippiness, and even the occasional unsettling menace of the older stuff. Am I wallowing too deeply in nostalgia and not giving the new stuff the attention it might deserve? Maybe. The rest of the crowd seems to like it just fine, though, and that’s what matters.

To be fair, the next song, ‘The Fantasy of Faldum’ is probably the stand-out amongst the new songs, albeit sounding rather more like the Moody Blues than Hawkwind. Lots of acoustic guitar, and new boy Magnus Martin doing good work on vocals.

We take a brief break to wish long-time roadie Jim a happy birthday, and then it’s back to the “classics”. 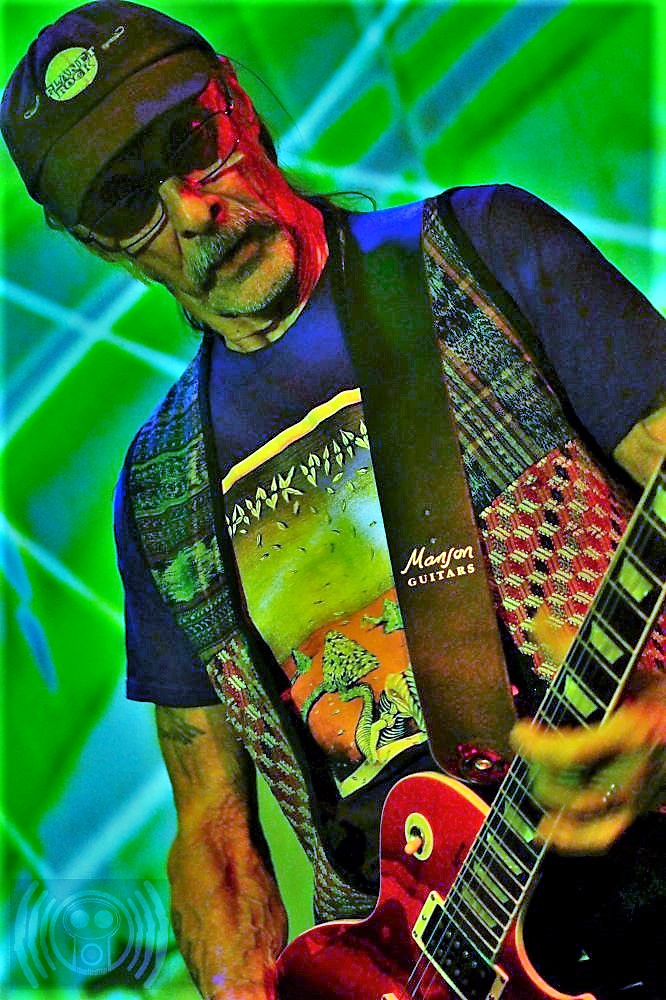 It’s unthinkable that they won’t play ‘Silver Machine’ , and indeed they do, right now. It’s one of those songs, like ‘Smoke on the Water’ , ‘Whole Lotta Rosie’ and ‘Paranoid’, that MUST, by Law, be played. To be honest, it’s a song I could take or leave, but it’s a fun sing-along, with drummer Richard Chadwick taking the mic for a change. The Queen’s Hall crowd is a happy crowd.

We’re close to the end now, and it’s time for those eternally conjoined twins from the Warrior on the Edge of Time album, ‘Assault and Battery ‘ and ‘The Golden Void’, forever inseparable and all the greater for that. Best songs. Best album. Glorious.

We close the set³ªª with the sprightly, and overtly political, ‘Right to Decide’; less space-rock and more “punk” than many punks, it’s a fine way to finish, and gets the crowd jumping. Well, as close to jumping as you’re likely to get at my age. . . 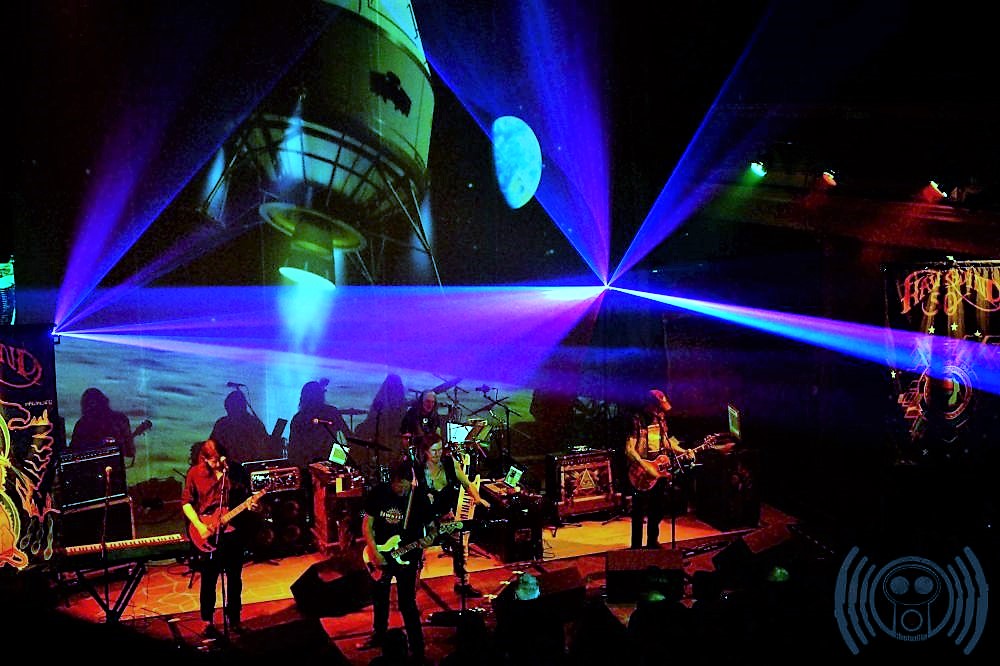 But, of course, the show’s not over. As expected, they’re back, and take us right back to their very beginning with ‘Hurry on Sundown’, jaunty and folkily acoustic at first, morphing into a proper space-rocking beast; and then the quintessential Hawkwind riff-monster, the incomparable ‘Master of the Universe’. This is it. This is what made me love Hawkwind forty-odd years ago, and what is likely to keep me coming back from time to time.

Fade out:
“Welcome to the Future
“You are welcome
“Welcome
“Well
“Come”

So, There we go. Is this a return to form? Well, yes and no. The old songs are given a sound thrashing, which is good. The new songs are yet to convince me, but are generally well enough received by the majority. I doubt that my hesitation will cause Captain Brock and his crew to lose much sleep, and rightly so.

Two last things: Thank you SO much, Hawkwind, for NOT playing ‘Flying Doctor’; and please, PLEASE, Tim Blake, please keep your top fastened up in future.

FOOTNOTES
1. Probably.
1a. Hey, it’s November in Scotland.
2. There are some ladies, but not many. There are some younger folks, but not many.
2a. “I am a clone, I am not alone…”
3. On this tour, Hawkwind are supporting doglost.co.uk , an organisation dedicated to finding and returning lost or stolen dogs, and we are shown a series of photographs of missing dogs before the show and during the break on this giant screen.
3a. Oddly, it’s been many years since I last herd ‘Spirit of the Age’, but I still remember all of the words. Enough to notice all of the changes and omissions from the original. . .
3aa. Well, we don’t really. I know that, you know that. . .