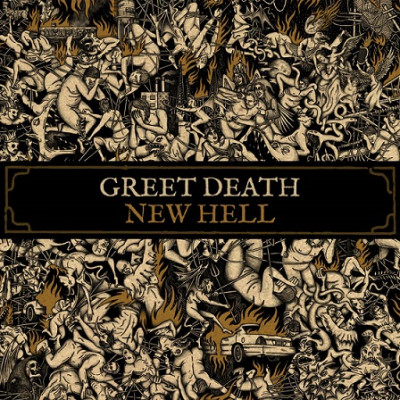 I’m going to make an assumption, that Michigan’s Greet Death chose their name after one my favourite Explosions In The Sky tracks. Whether that’s the case or not, that’s how this three piece managed to catch my eye, alongside their allegiance with record label Deathwish Inc. Their second album New Hell, has been a total shock to my system, combining wondrously heavy shoegaze guitars and sublime melodies. Recorded by Nick Diener at Oneder Studios and expertly mastered by Jay Maas at Getaway Recording, this record is a massive step up from their unruly yet promising debut Dixieland.

Opener ‘Circles of Hell’ begins with delicate strains akin to something indie merchants Gene would have created back in the Britpop heyday, but when those ultra heavy distorted guitars slam in, I’m taken completely by surprise. Gaval continues to croon like a youthful Morrissey over a pulsating wall of thick sludgy guitars and wondrously picked guitar lines that shimmer like fireflies over a swamp. What an introduction, I am completely hooked and excited for what lies ahead. Howling feedback signifies the start of ‘Do You Feel Nothing?’ before lurching into a power trio combination of splatter snare drumming, fizzy guitars and a monstrous bass groove. This is the first I’ve heard Boyhtari’s vocals and to say I am taken aback is an understatement, but in a good way. There needs to be a special mention for the swirling solo in this track that glides effortlessly making for an outstanding end to a killer pop/sludge crossover song.

Suitably impressed, the initial flurry of excitement dissipates somewhat with ‘Let It Die’, an acoustic campfire song with elements of country permeating throughout. Gaval and Boyhtari harmonise together like two of Jim Henson’s muppets out on the piss. The song is an absolute oddity amongst the heavier tracks on the album and comes too early in the running order abruptly disrupting the heaviness of the first two songs.

Getting back on track, ‘You’re Gonna Hate What You’ve Done’ begins as another ballad of mostly acoustic/clean guitars ably complimented by some lovely flanged dreamy guitars in the vein of Cocteau Twins’ Robin Guthrie. When Boyhtari takes over vocals with a magical and sweet tone the song elevates and amps up to another level. You begin to wonder if someone has switched albums as these mellow songs are so opposing of the earlier metallic sounds. But then the track erupts back into life when those distorted guitars return, like a modern day take on Bob Mould’s Sugar. Gaval rips out another extended and marvellous solo that J Mascis would be proud to call his own.

Boyhtari’s voice is pure and clear and he has such a way with melody, totally at odds with the ferocity of the music. ‘Entertainment’ teases you like a Nirvana used to do, with quiet verses of delicate guitar and a heaving bass line. You (think you) know the song is going to explode but the rascals never do let it take off and it chugs along impressively like an offering from R.E.M’s Monster album. ‘Strange Days’ is a dark and twisted combination of gorgeous pop melodies and dirty fuzzy swathes of heavy guitars. With just the right amount of reverb tacked on to his vocals, Boyhtari reigns in the kook factor but ultimately sounds like he is in the wrong band. This just makes me love Greet Death all the more. The amazing finale whereby Boyhtari latches onto one line and ad libs it to closure finds him channel some prime Brett Anderson and it’s glorious.

The mellow strums at the start of ‘Strain’ get smashed to bits when the herculean guitars appear augmented with some bowel shaking organ. Gaval and Boyhtari harmonise like the offspring of Simon and Garfunkel and it all makes for an intriguing and unique mix that I didn’t realise I needed in my life as much as I do. The string bending heroics from Gaval again would certainly have the J Mascis seal of approval. Ever a sucker for a flanged guitar, the Guthrie tones return in ‘Crush’ and Boyhtari croons a sweet and tender tune that young and old will be enticed by.

The incredible final/title track ‘New Hell’ gets off to a slightly confusing start with elements of Father John Misty’s folk rock and some very fine harmonising. Versiuis hasn’t received the memo as he belts the shit out of the drums throughout, which suggests we’re heading somewhere more intense. Gaval gives that flanger pedal one final workout and when the squall of feedback arches into the mix we twist headlong into an incredible dreamy sequence of seriously heavy layered guitars and a repeated melody that will crush the hardest of hearts. Listen closely and you’ll hear a black metal growl mixed underneath the wondrous swooning vocals from Boyhtari. When strings rise up into the mix I am lost in one of the most incredible songs I have heard in a long while. These are the realms of blackgaze excellence that Deathwish label mates Deafheaven also create. Boyhtari’s final words are “here comes our new hell, you are my bad dream…” before the song fades out with delicately picked guitars and that droning flanged guitar loop that is a thing of wonder and beauty.

As I’ve already boldly declared, this album really grabbed my attention as it combines so many musical elements that float my boat. Numerous favourite artists get nudged along the way but that’s not to say Greet Death are total plagiarists. There really isn’t anything particularly new here, but the combination of great tunes, heavy guitars and Boyhtari’s incredible voice makes New Hell a unique sounding album. I’d missed Dixieland when it came out in 2017 but revisited it on hearing this record. The difference is considerable in terms of song writing and the dynamics of the guitars. Boyhtari reigns in the over exuberant nasal notions from the debut which may have detracted from the music therein. With New Hell, Greet Death have crafted a wonderful album that has truly mesmerised me. Unfortunately guitar music doesn’t garner the same attention as it used to do, otherwise this outstanding album could very well have been this generation’s Nevermind.