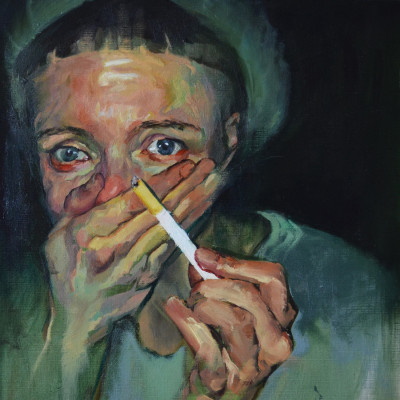 Just the other day, on a familiar social media hell-site we all long to escape, my caring digital footprint helpfully reminded me that three years back I was excited to see Giant Swan headlining a cracking Supersonic launch event that evening. A lot of us had caught them earlier that summer in a “who? no, me either mate” type situation where their ragged, improvised, electronic assault had absolutely torn our collective grinning idiot face off and made us instant fans. They’ve developed since then, remaining a consistently thrilling live experience but releasing relatively little music, always in short runs on a series of different labels.

Here at last is their full length debut, Giant Swan, released on their own label, Keck. Highly anticipated is an extremely over-worked phrase in music writing but I think it’s fair to say we’d begun to think they might never get around to this. It turned out the mysterious duo were Robin Stewart and Harry Wright, guitarists in Bristol band The Naturals. This didn’t help shine much light because no-one had really heard of them either. It did suggest that the energy and possibility charging through their music was a result of the step sideways from playing in bands. That coming to it free of genre rules and expectations helped them cook up sticky techno treats on unpredictable hardware without a second thought for how rigid the form could be.

While they have honed that wild spontaneity into something more focussed and lethal in the live environment, they’ve also managed to hang on to the unruly energy of exploration and chance discovery. However, Giant Swan is not an attempt to capture their exhilarating live show in album form but ten tracks of divergent abstract electronics. The short, hectic opener ‘55 Year Old Daughter’ is an anxiety inducing packet of razored vocal loops and fractious percussion. They follow that with ‘Pandaemonium’ an urgent teeth grinder unsettled by blasts of hiss and disembodied voice. Tightening the muscles up your spine, there’s a hyper aware, cold sweat, disorientation to it.

There’s plenty more taut and up-tempo stuff here of course but it splits the run time with darker more fractured industrial atmospheres. Third track ‘’I’ As Proof’ is the first full shot of this, the beats stripped away leaving deep echoing vocal drones and clusters of harsh texture. As if we were running in ‘Pandaemonium’ but have stopped for a breather in an empty bus station. Not for the last time, I’m reminded a little of Coil. The processed vocals and cold metallic sounds are recurring elements. On ‘Pan Head’ they become a juddering machine cacophony, beats aplenty but nothing dancefloor friendly.

While there’s times you find yourself involuntarily shaking a leg or snapping your neck to the beat, this is unlikely to be anyone’s idea of a party album. It’s mostly icy fractures and discomfort. The shattered clank and insistent pulse of ‘Weight Of Love’ remind me that last year I saw them with Birmingham techno legends British Murder Boys and how they made perfect sense as a new flowering of that impulse to mash together early 80’s industrial experiments with techno’s machine assault. Giant Swan abandon the beat grid more readily than BMB here, allowing their more abstract and experimental impulses to drag them down dim corridors.

Some relief finally arrives with penultimate track ‘YFPHNT’ a hard techno banger of relentless forward motion speeding through the night. Sweaty and kinetic its straightforward drive feels like an escape from the queasy urban dystopia of earlier. Not wishing to let us wriggle away like that, the atmospheric, dubbed out, drone of closer ‘Spisbah’ suggests such escape is only temporary, if not entirely illusory. Calmer than anything else here, its stillness remains bleak, the outlook cold and ominous. The album’s cover is a painted portrait of a tired and emotional soul holding up a cigarette to reveal how, in their confusion, they’ve lit the filter end. Chilly, sleep deprived paranoia is the overall vibe. A raw-nerved dawn stagger through grey streets.