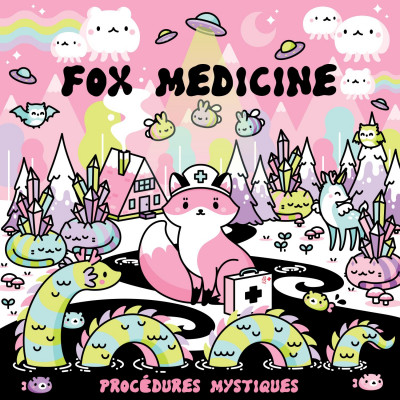 The infinite monkey theorem posits (sort of) that eventually a monkey at a typewriter would recreate every text, including famously, the complete works of Shakespeare, and if sleep deprived would knock out a series of Mr’s Browns Boys pretty quickly. That’s where I feel we are with rock music right now – at the point where all the most random events are happening as all other likelier outcomes have occurred. We have recently witnessed the birth of Mongolian folk metal, Al Jourgensen working with David Hasselhoff and, tellingly, the rise of Baby Metal’s extreme-metal-meets-J-Pop.

Portland, Oregon duo, Fox Medicine now bring us “bubblegum doom” via their new lp Procédures Mystiques. What now? Well vocalist and singer Neezy Dynamite describes the sound as “…a strawberry milkshake you drink as you walk through a dark alley of some creepy fairytale”. The band’s producer Toshi Kasai, who has worked with the likes of The Melvins, Tool and Helmet, calls them  “the weirdest band” he’s ever worked with and describes them as “Black Sabbath with J-Pop vocals” and he’s not far off.

Now anyone that has ever suffered a conversation with me about Baby Metal will know I’m not a fan, so why is it I’m strangely drawn towards Fox Medicine’s sound, which features noisy rock music with sugary, childish singing from Neezy? Well, firstly because this feels like a rather whimsical, charming little release by a band that love sludge and grunge but also want to raise a smile. I will never be convinced that Baby Metal isn’t the product of some cynical music industry high concept masterplan  – don’t @ me.

The other reason I love it is that despite the sickly sweet song titles – ‘Comfort Pony’, ‘Cotton Candy Planets’, ‘Strawberry Tree’ etc. Procedures Mystiques contains as fierce a set of riffs as you’ll hear this year. The mix of Neezy’s super-fuzzed riffery, Vanny Keeps brutal drumming and those girlish vocals will appeal to fans of everyone from Melt Banana to The Melvins. Then again, if you don’t care for one track, chances are you won’t like any of them.

The songs dwell in the realm of the senses, the protagonists frequently overwhelmed by their surroundings and experiences. In ‘Ice Cream Man’ Neezy cries “trip trip the ice cream dream is alive, I’m on fire and it’s getting real”. The line between agony, ecstasy, beautiful dreams, and horrific reality is crossed and explored. In ‘Chester Milktoast’ Neezy laments a man lost in his own mind “is anybody home, is anyone there, milk and toast all day” over a mixture of grunge riffs, feedback, sci-fi sound effects and what sounds like castanets.

If lyrics aren’t your bag then no matter, check out the huge sludgy slow-mo guitar and caveman poundings of ‘Strawberry Tree’ which stutters and thunders in a most ominous fashion, soundtracking another dark fairytale. Or for faster, punkier thrills go to ‘Space Kitty’ which manages to be spiky, groovy and heavy as fuck, whilst also including ‘miaows’ and weird, bleepy, synth noises and metallic chirrups.

In truth the album dips a bit in the middle but considering its rather singular, not to say peculiar charms, it is an album I keep returning to – eager for it’s dirty sugar rush. As the lyrics reveal themselves so the songs become ever more effective, sucking you into Fox Medicine’s weird world.