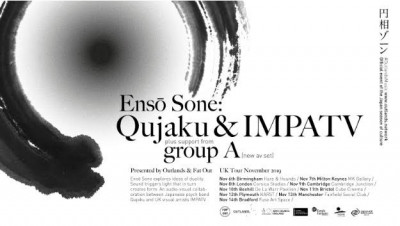 ENSŌ SONE is the sixth touring project brought to us by the Outlands network. Currently made up of eight arts organisations/venues/promoters outside London coming together to put on unique, collaborative, experimental projects combining musical and visual elements, they’re helping to connect and strengthen the audiences and circuit for such ambitious projects. In short, they’re doing God’s work. This new tour brings together Japanese heavy psych types Qujaku and Manchester’s IMPATV in a collision of sound and image.

Opening on the tour, also with a new AV show, is Group A. Formerly a duo the ‘group’ is now down to Tommi Tokyo solo – with visuals from Berlin’s Dead Slow Ahead – her table of electronics set up in front of the stage and behind a mesh screen onto which, along with others at either side, films are projected. It’s a slow build, beginning with the smallest murmur into the mic, hardly more than a breath, looped and pushed. Other tones and field recordings join quietly. About ten minutes in it has grown to a rich layered drone. Like the sounds, the images are dim,  indistinct textures: is that smoke? oil on water? earth? They’re organic and melt into each other; a moving, unknowable, monochrome surface reflecting the twitching soundscape. You notice beats have appeared but you can’t tell how long ago. The imagery toughens; industrial pipes and thick worn ropes. As the sound becomes more visceral there are close up shots of teeth. It’s very skilfully done; even as everything intensifies in the final few minutes it disdains an obvious blown-out noise crescendo, remaining controlled and purposeful.

At Supernormal festival this year, on multiple recommendations from friends, I went to see Qujaku with reasonably high expectations, which they then completely pounded into the dust. The footage IMPATV shot of that performance is on the internet. A couple of months before that they had spent some time in Japan with the band shooting the imagery they have transformed into this show. As I understand it part, or maybe even all, of the visuals are triggered by the band’s playing on stage. There’s pulsing squid tentacles and street-views shot from a moving car; images manipulated into abstracted patterns and resolving back again. Two screens either side of the stage are on the venue floor and made up of multiple mesh-layers fracturing and echoing the projections; behind the drums a large circular screen offers a  focal point. In between, the band play in near darkness, illuminated by dim colour washes. 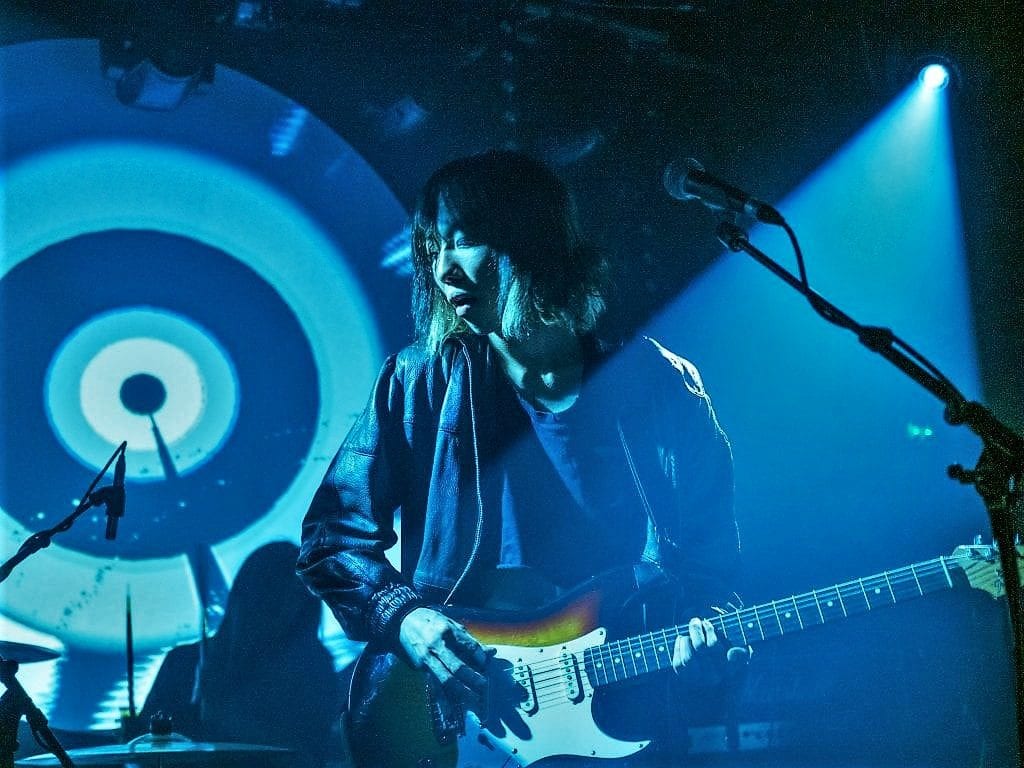 They start with ‘In Neutral’, the slowly unfolding title track from their recent EP. Lead by Hiromi’s flowing saxophone over the kind of distant universal pulse Föllakzoid do well, It pulls itself more into focus, building into an urgent march, but it’s still a relatively placid outlier in their set. Once she picks up her bass and adopts the power stance, they set about bringing the psych-noise until the bass is pounding in your throat. Qujaku are that rare and glorious thing – a band who have found their own voice in a crowded field. The elements of their sound are familiar but the combination is unique. They make a mighty noise, a fine balance of structure and chaos that seems to unfold so naturally that even its surprise turns into blasts of guitar scree feel a harmonious part of the whole. Never lumpen or dreary, they do not seem to be fighting their own music in the way some heavy psych bands do, toiling at their instruments or locked in a holding pattern. They have escaped the blues. Ryo Habuto’s thundering drums are a key to this. He doesn’t play the Dinger beat or fall to tired rock moves, but brings a tough and driving pulse, sometimes supplemented by Soushi on additional drums in case it wasn’t rhythmically intense enough already. A little like Swans or Loop in full flight, as heavy as they are it’s not oppressive but elevating. They are light on their feet; frontman Shuya bends and shakes and twists as if the music is in him and pouring out, a rush of light and sound and energy. If you want to be crass about it, it’s just another psych rock band with a good light show. It’s just that both are particularly good. Qujaku are not at the point in their career where they can yet play venues big enough for a production as impressive as IMPATV have brought here; but they’re so good it probably won’t be long. You don’t want to miss this tour.