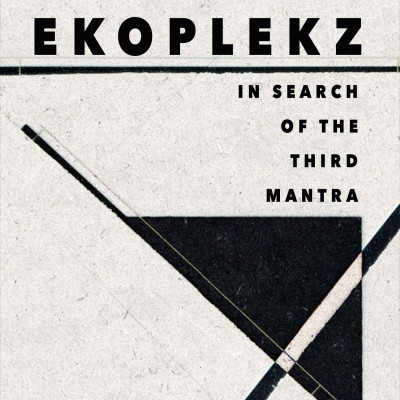 In Search Of The Third Mantra by Ekoplekz

More West Country weirdness. Another slab of raw, dubbed out, tape murk from Bristol maestro Ekoplekz. To the unfamiliar or unsuspecting a title like In Search Of The Third Mantra might suggest some syrupy new age slurry but in this case the actual music is better reflected by the monochrome constructivism of the artwork. In this dank, urban, sonic rot the word mantra makes more sense as the optimistically exotic name of a mid range family car, rusting in a multi-storey or flaring brightly on waste ground.

On opening track ‘High Rise Dub’ the bass is buried deep as a cold whining drone scatters listless electronic squiggles. It’s less pirate radio vitality and more a nod to JG Ballard’s novel in which the high rise becomes a microcosm of societal disintegration. The second tune is called ‘K-Punk’ after the blogging alter ego of the late great Mark Fisher, to whom the album is dedicated and “who’s brilliantly insightful writing is sorely missed while trying to make sense of these insane times.” Edgy and intense ‘Do The Meinhof’ has some night-time underpass, high speed ring road vibes and chaotic menace about it. Just as you feel it’s heading towards something bad it stutters to an abrupt, occluded conclusion.

The title this time is an obvious reference to Cabaret Voltaire (although, to be fair, a nod to the Cabs is pretty standard for Ekoplekz) and completes a three part signposting of concerns, a conceptual framework for the search. What we’re looking at here is the curdling of utopian social impulses. Inspirations in industrial and post-punk moves and responses to the tensions of the times. Some vague parallels drawn with our current skip fire timeline.

All good stuff to sluice around your brains but is it really there in this music? Ekoplekz has never been either descriptive or narrative. He’s spoken in the past of being unable make concept records and his best known work, on the albums for Planet Mu, were compiled by label boss Mike Paradinas from the endless stream of tunes coming out of his studio. Loose spontaneity is a core value, working with hardware and direct to tape there’s no digital finessing here, but there are still decisions about titles and running order to make. Framing devices for the ceaseless inchoate chatter and gurgle of his machines.

It’s not that Ekoplekz’s  music is blank, more that it is obliquely evocative, like degraded TV background music. I first encountered it on Intrusive Incidentalz Vol 1. an album title which still captures something essential about his work. Ekoplekz came up adjacent to the development of both hauntology and dubstep (Intrusive Incidentalz was released on Peverelist’s Punch Drunk label) without ever belonging to either. There are commonalities though. Dead futures and Radiophonic Workshop moods loom large in both his and Ghost Box artists’ work, although he could hardly be more distant from their media nostalgia and meticulous sample collages. Haunted by the ghosts of dub space his corroded tape jams are rarely what you’d think of as dancefloor friendly but the sound is all his own.

The second trio of tunes are slower and softer edged. The spacey ‘Trigger Machinery’ is like the idle chatter of the assembly line at rest, an after hours robot conversation in a closed factory. ‘Accept Nothing’ is warm and lulling, the closest you’ll get to that meditation tape mantra. A calmer space in the centre of the album. The quiet slips away as ‘She’s a Tangent’ is nudged along by a broken, stuttering acid line. There’s a fractionally brighter feel to the later part of the album, ‘Corrosion Cars’ opens with an alarm and its busy pulse bumps beneath floating slippery synth lines. Still, despite the shiny American promise of its title ‘Chrome Elevator’ winds gradually to a power failure halt. The final ‘Heart Addict’ brings us back to that 80’s industrial chill with a bass line and skittery electronics that nicely recall 23 Skidoo before collapsing down an echoing time hole.

I was mistaken earlier about our first encounter because Nick Edwards, before he was Ekoplekz, used to write a blog called Gutterbreakz back when Fisher was doing K-Punk. (Archives of both can still be found online, should you be inclined.) Edwards wound up Gutterbreakz in 2009. The penultimate post contrasted the 70’s and 80’s theme tunes for TV science show ‘Tomorrow’s World’ and featured quotes from fellow blogger Neil Transpontine and Leyland Kirby (The Caretaker, V/Vm) acknowledging the failure of the promised shiny tomorrow to ever arrive. “Things are the same but worse, as our optimism of the future has been eroded away collectively. ‘Tomorrows World’ never came.” – Kirby. It also mentions Ghost Box house band Belbury Poly and the replacement of Delia Derbyshire’s Dr Who theme. It’s like retro futurist bingo.

In Search Of The Third Mantra brings Ekoplekz full circle, that same moment mirroring the present. A decade on and we’re back at that crossroads trying to work out how to make a better choice when everything looks bleaker still. Kirby took The Caretaker project through an investigation of dementia and brought it to an end earlier this year. Depressingly this is the ‘final release’ from Ekoplekz who is going on indefinite hiatus. It also marks the last one from the excellent Front & Follow label who are folding up for now at least.

It’s not clear if that’s the Ekoplekz project or music generally for Edwards, I understand there remains a second album of his gnarly acid collaboration pHarmerz ready to go at some point. More instinctive and less conceptually grand than Kirby, perhaps Edwards has nonetheless also found himself not knowing where next to turn. For someone so relentlessly productive it seems odd and yet he’s chosen to stop before any noticeable dip in quality and leaves an impressively extensive catalogue to sift through. In Search Of The Third Mantra is as good a place as any to go out. What will we make of all this in another ten year’s time?