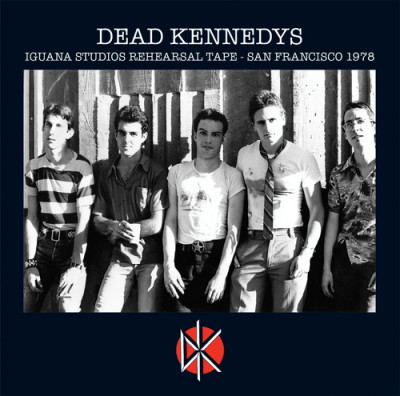 If you’re reading this, you probably know as much (if not more) about the Dead Kennedys’ musical history as I do and don’t need me to provide you with introductory information thereon. This release collects the songs the band recorded during the brief time they were a five-piece in 1978 and features embryonic versions of many songs that would go on to feature on their classic debut, Fresh Fruit for Rotting Vegetables, two years later. As is perhaps to be expected from a just-formed band who wouldn’t have had access to the best-quality recording facilities, the sound quality of these tracks is extremely rough and patchy, qualities that I imagine would be exacerbated when played on crackly vinyl. However, that is not to say that they don’t hold some appeal.

The collection opens with a version of ‘California Über Alles’ B-side ‘The Man with the Dogs’. The song serves as a good example of how these songs show why the band felt rhythm guitarist 6025’s contributions were largely superfluous and thus didn’t bother replacing him when he left in March 1979. He spends the track playing along to Klaus Fluoride’s bass, allowing East Bay Ray to concentrate on the surf guitar-influenced pyrotechnics for which he would later become known. ‘Kepone Kids’ follows, a tale of governmentally enabled pollution that the band later reworked as ‘Kepone Factory’ and featured on their 1981 EP ‘In God We Trust, Inc.’ The version included here is slower and less immediate sounding than that recording though, as is the case with the Iguana cut of Fresh Fruit… album track ‘Forward to Death’.

Frontman Jello Biafra’s vocals start to crack a bit at the start of ‘Kill the Poor’ (I guess this was before he started using honey to lubricate his throat between songs). ‘Your Emotions’ and ‘I Kill Children’ are perhaps the most satisfying renditions of subsequently well-known DK tracks here, and the recordings actually bear comparison with their respective Fresh Fruit… counterparts relatively favourably. The previously rarely heard ‘Dreadlocks of the Suburbs’ is quite amusing as a comedy song that satirises white reggae songs like 10cc’s ‘Dreadlock Holiday’ but on the production and songwriting levels, it lacks the musical force of the band’s more famous demolitions of cultural appropriation by white liberals.

Ray’s guitar doesn’t reach the soaring heights it reached during the intro to the album version of the band’s best-known song, ‘Holiday in Cambodia’, on the version of it included here. Instead, he just plays some treble chords while 6025 chugs along with Fluoride’s bass before chugging along with it himself during the verses. His playing during the choruses is also noticeably more sedate than it was on both the album and the single versions of the song, and this is overall the slowest version of the song I’ve ever heard played, including the Foo Fighters’ cover of it for an MTV special in the early 2010s.

The cover version of the ‘Rawhide’ theme song is about the only song on here that manages to outpace its studio counterpart but it’s a shame that its speed is hampered by the poor fidelity of the recording (although obviously, this is something over which the band would have had little to no control, given the resources available to them at the time). The collection concludes with a cut of ‘California Über Alles’ whose choruses will sound to those familiar with its studio and live versions like the band are playing as quickly as they can but not quickly enough.

This collection of songs works well as an interesting historical document that gives a (literally) rough idea of what the Dead Kennedys sounded like as a five-piece. The poor sound quality does quickly get irksome though, and it’s clear from their playing style that the band were still finding their feet musically at the time these demos were recorded. Die-hard DKs fans should definitely give it a listen and completists will want to add it to their collections. However, it cannot be restated enough that the best place to go for those seeking an introduction to the band is their era-defining, trailblazing 1980 debut full-length LP, Fresh Fruit for Rotting Vegetables.