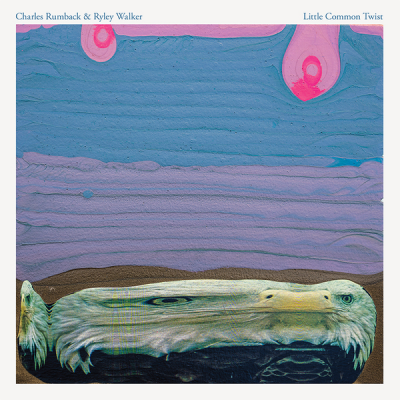 Ryley Walker has made a name for himself in recent years, not only for his excellent acoustic guitar playing but also for coming up with albums that explore various musical forms, from psych-pop to material that veers to avant-garde jazz. Hence Ryley’s collaboration with Chicago drummer/percussionist Charles Rumback, somebody who is more tied to Chicago’s Association for the Advancement of Creative Musicians (AACM) and jazz experimentalists like Sun Ra.

The two have obviously found mutual lines of musical interest, as their latest album, Little Common Twist, is their second collaboration. On the basis of the eight tracks presented here, with very little use of overdubs and just Rumback’s drums and Walker’s acoustic and electric guitar, they obviously have.

It is some kind of a habit these days to mention a ‘keyword’, and a keyword that can be used here is ‘space’. Space with and without notes, and the thing that is the glue that either makes the music shine or just remains mediocre. It is that one element musicians create while playing that shows whether they have synergy or not.

And Rumback and Walker got it! Prime example of that here is practically every track, but the one that stands out in that respect is ‘And You, These Sang’, which has the flow of a classic like “You Know You Know” the classic from the first Mahavishnu Orchestra album (Inner Mounting Flame), that stood out among all those crammed notes and flashy playing surrounding it.

Throughout the album, Rumback and Walker show that the old maxim ‘less is more’ proves itself once again, but also that it can be only done by those that truly know and feel the music.