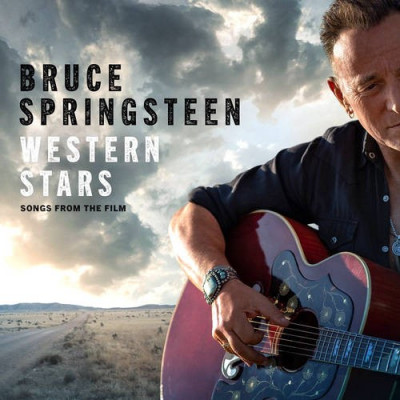 Western Stars (Songs From The Film) by Bruce Springsteen

It was impossible to escape the lure of Bruce Springsteen back in 1984 when the Born In The USA album elevated him to truly global star status. Of course he had already released a staggering set of classic albums but for this 12 year old, that album was my introduction to a man who I have only recently, truly come to appreciate on a much deeper level. That album meant a lot to me, so much so that I actually made a copy of my big brother’s cassette and created my own felt tip pen inlay card, resplendent with handwritten lyric sheet. Then there was the 1986 triple live album/box set affair that contained so many early classics, but those songs didn’t click with the teenage me in the same way. I have to admit, it would be 2007 before that latent Springsteen love affair would be revisited, with the Magic album, which contains some outstanding songs and arrangements. From there, I went on a back catalogue sweep, purchasing all of the studio albums. I know this might cause consternation amongst some diehards, but it is still the songs from the later years that I prefer.

My anticipation for the release of Western Stars was heightened with the release of ‘Hello Sunshine’, the similarities to Glen Campbell’s widescreen country rock providing major excitement. The strength of the songs on this mesmerising album, coupled with those beautiful arrangements, would be enough on their own to create a memorable experience. However, my initial plays of this album happened on a family holiday in the stunning Binevenagh area of Northern Ireland which has an incredible rocky mountain with rolling flatlands at it’s base. As long as I live, I’ll never forget hearing my two children, aged 4 and 6, sing along to EVERY song on Western Stars.

Taking the decision to not tour this album, Bruce embarked on co-directing a film to accompany the album. Drafting in a full orchestra to compliment his backing band, Western Stars – Songs From The Film album is performed in front of a seriously fortunate live audience, in an almost 100 year old barn. I have only seen the trailer for the movie and it sent shivers down my spine. Lord knows what the film will do, when I eventually do get to see it. As with many of Springsteen’s finest, the songs on this album are character driven and as time marches on, deeply reflective. So this album takes the musical performances from the movie to form what is essentially a soundtrack, and my review will mostly focus on the transitions from studio to live.

Throughout this glorious album there’s an immediate and noticeable clarity to the lyrics as Bruce picks out the words with a slower delivery than on the studio version. The musicians at work recreate the instrumentation of opener ‘Hitch Hikin’’ superbly as every little nuance of strings and percussion is delicately and lovingly reproduced with crystal clear clarity. On ‘The Wayfarer’, such is the sublime attention to detail from the musicians involved, it’s almost impossible to differentiate from the studio version, save for Bruce’s breathier deliverance of some of the lower registered notes. As the song breaks free into the home straight Bruce lets loose with a holler and the orchestra excel with transporting you to the open desert for an impromptu extended jam at the end (just to contradict my previous sentence!).

The magnificent strings that welcome ‘Tucson Train’ are given extra wonder factor with some swirling organ and as one of the rockier numbers, Bruce gets the chance to flex a little more with some hearty hollering. With the exceptional ‘Western Stars’, that swooning slide guitar has an even greater tug on your heartstrings as the band provide an exceptional level of dexterity, building the song into a spectacular pay-off when those sumptuous strings rise up ably reinforced by soaring backing vocals. This was always a standout track and this version will leave you an emotional wreck.

For me, the jaunty ‘Sleepy Joe’s Café’ is the album’s red herring in some ways and has never been a song that I’ve truly enjoyed. This version jumps and kicks like a mule and the punchy brass and swinging accordion transform the song into a romping hoedown. Bruce gives a little chuckle at the end letting us know how much he enjoyed cutting loose. On the ode to living life on the edge, ‘Drive Fast (The Stuntman)’, Bruce provides a softer vocal and there’s a real tenderness and yearning. It’s incredible how Bruce really inhabits the characters in his songs. Once again, the string arrangement is perfect plus, as the nuances of studio polishing are removed.

Bruce sounds fragile and frail in the spoken intro to ‘Chasin’ Wild Horses’ as he introduces it with “Well you can run away a lot for a little while, but you can’t run away from it all forever, you certainly can’t outrun yourself, this is Chasin’ Wild Horses…”. This is classic Bruce Springsteen and the finest song on Western Stars, in my opinion. The pedal steel guitar that winds its lonesome way is joined by a beautifully plucked banjo and when that string break drops I am in pieces. Every time. When the songs are getting this lush treatment, it almost makes returning to the studio album something I am reluctant to do. There is magic at work here as the music transports you to an American desert, miles and miles of red sand stretched out before a stunning sunset with those marvellous equestrian creatures roaming free.

When I initially heard ‘Sundown’, the lead song from Western Stars, it sent me into a flurry of excitement. Bruce’s voice is rich here and the delivery somehow manages to contain even deeper emotion as he slips and slides and adds little variations in the vocal melodies that heighten the heartbreak. As the years have progressed those 3 hour stadium gigs and bombastic hollering (the Born In The USA period especially), it’s a miracle Bruce has any voice left at all. His tones now are considerably softer but he can still soar immaculately and create wondrous volume.

I found ‘Somewhere North of Nashville’ almost slipped me by unnoticed on the studio album, not so here as the beautiful strings, tender backing singers and Bruce’s impassioned vocals make it impossible to not feel the hairs on your neck stand up. ‘Stones’ is the only track that seems a little lacklustre compared to the studio version. Perhaps it’s the pace of the song that causes the issue for me as it falls between ballad and rocker and I find the instrumentation a little straightforward, until that fine violin/fiddle solo, which is utterly splendid. Bruce croons the glorious chorus of ‘There Goes My Miracle’ over gorgeous soothing strings and the backing singers step up to provide some wondrous accompaniment.

Given the context of Bruce’s troubles with his own well-being, the recreating of ‘Hello Sunshine’ really plays on your emotions as Bruce’s voice actually does crack on a few occasions, the weight of the song’s lyric clearly affecting him. It’s a little unnerving hearing this mighty titan of rock n roll sound so fragile, but it makes you love and appreciate him all the more. In a similar vein to ‘…Nashville’, ‘Moonlight Motel’ takes on a whole new level of melancholy as Bruce barely breathes out the reflective lyrics. When his beloved Wife Patti joins him it’s a truly beautiful and heart swelling moment and when I get to see the movie, I suspect there will be tears.

Finally, by way of homage to the inspirational Glen Campbell, who clearly had a massive influence on this amazing set of songs, Bruce faithfully covers ‘Rhinestone Cowboy’ as an additional track. As you would expect, Bruce is enthralled at performing this classic song and of course he makes it as wonderful and vibrant as only he can.

Springsteen fans will adore this collection and I find it a worthy companion piece to the much loved Western Stars album. As I’ve already touched on, Bruce’s immaculately tight backing band accompanied with the obvious musical ability of an orchestra, means that the instrumentation on this album is almost the equivalent of the studio arrangements. The free flowing nature of the music allows room and space to infiltrate the songs and accordingly Bruce gives a more relaxed vocal throughout. This is what really adds a special atmosphere to the album and makes it more than just a curio. A tour of this album would have been out of this world, but as a substitute, Western Stars – Songs From The Film acts as a superb ‘live’ memento of one of the world’s greatest songwriter’s finest hours.