(((O))) Review: Underhand – The Secret History Of Nothing 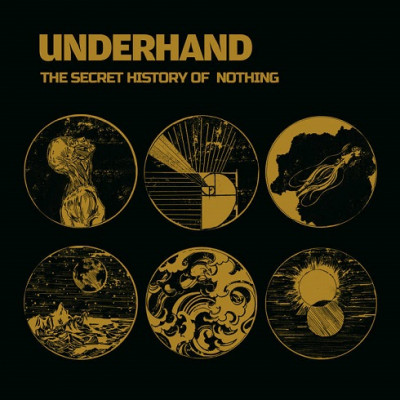 The Secret History Of Nothing by Underhand

Every now and then an album comes along that sets fire to your expectations and completely demands your attention. Chicago three piece Underhand have created one such album with The Secret History Of Nothing, a truly stunning collection of post rock/metal instrumental music that engages and enthrals throughout its six sublime tracks. The talents of Courtney Grove (drums), Rod Hentringer (bass/hammond/piano) and Michael Hayden (guitars/synth) are obvious and Mario Quintero (Spotlights) has done a superb mixing/mastering job to compliment Adam Stilson’s fine recording. The album is entirely self-financed and this achievement should not go unnoticed.

Settling into an unsettling fizzing drone, ‘Nothing Part I’ provides a tense opening while Michael’s elegant guitar adds to the eerie atmosphere. Bowed guitars roll back and forth like a heaving ocean before Courtney chips in with a steady Bonham-esque groove. Michael pulls some exemplary guitar atmospherics from the ether and eases languid lines that all fit together seamlessly and you’re sucked in completely to this immersive music. Just when you’re thinking mellow is the order of the day crushingly heavy guitars fire into life (took me by surprise on first listen!) and the trio hyper shift you into a slamming beast of a track. Ending with some delicate tones from Michael you find yourself transported to a desert wasteland, surrounded by nothing but hope.

Neatly merging into ‘Nothing Part II’, Michael’s guitars suffocate you with an intense distorted throb that we last heard on the sublime Emma Ruth Rundle/Jaye Jayle track ‘Light Song’. It feels completely desolate as the searing guitars pile on, and when that ghostly tap tap tap creeps into the mix you want to look behind you. The atmospherics are amazing and when Rod’s bass (or possibly Michael’s guitar-you just don’t know with his range of styles) opens the door to the crypt the fear is utterly palpable. Sensing your heightened anxiety Michael eases out a warm and beautiful melody that envelopes you and comforts you. (I’ve had this melody in my head for weeks now). As the track shifts into something heftier I hear echoes of Chicago’s other post metal kings, Russian Circles. This is a record imbued with a serious amount of thoughtful music and a plethora of intriguing ideas. I didn’t expect to hear a Hammond organ but there it is, oozing it’s way into the mix recalling the halcyon days of prime Deep Purple.

The first moments of quiet come with the beautiful ‘Void’, a delicate passage of shuffled drums, floaty guitars and a fluid wandering bass line. There aren’t many bands capable of the heaviness of Underhand that utilise piano, but it makes perfect sense when it appears halfway through the track.

Up until ‘0’, the overriding tone of the album has been a steady and stately mellow affair, with the occasional interjection of metallic bursts of vitality. This tracks goes straight for the throat with snappy guitar cracks that enter the realm of math rock. When Michael lets rip with the distortion the band ably match him with some hefty beats and a ground shaking bass rumble. Once again, there are sizeable hints of Russian Circles, their tension building techniques and wailing guitars. But Underhand don’t just recreate sounds that already exist elsewhere, they have their own unique identity and it’s that which will lure you back to this album over and over.

‘Nothing Part III’ treads paths of isolation and despair with some deeply affecting guitars, Michael really is a dexterous player and effortlessly swings from beauty to brutality with more than a stomp on a distortion pedal. Underhand also channel influences from the work of Emma Ruth Rundle (either as a solo performer or Red Sparowes). The technical atmospherics and melodic guitar lines continually mesmerise and set this album on a high pedestal as a fine exponent of the post rock/metal genre. Of course, this is all made possible for Michael by his bandmates’ totally in synch bass and beats combo alongside him.

The entire album is neatly sequenced so that is effectively one long track, but you wouldn’t notice the splits or that there are individual tracks. It never comes across as a chore to get through as the dynamics are perfectly connected so that space and calm come along at just the right times. Before you know it you are on ensconced in the final track ‘Nothing Part IV’ which combines a lot of the elements already heard. The rolling piano that carefully intertwines with Michael’s sumptuous guitar work provides warmth and depth alongside Rod’s softened bass and Courtney’s laid back drums. In the tempo/time shifting section the organ returns to mould together the complex playing before eventually losing the battle and we lurch into a jazzy passage. As if to signify the impending closure the band lurch back into heavy territory and the charge to the finishing line is angry and powerful. Michael’s guitars are now a raging blur of crushing heaviness with melodic offshoots that scrape the sky. As the album concludes in a storm of feedback and shuddering drums you cannot help but reel back with glorious satisfaction, knowing that you’ve just enjoyed a modern classic. Yes, that good.

It is abundantly clear that the trio of Courtney, Rod and Mike have spent a lot of blood, sweat and tears making this album. Their knowledge of a multitude of styles and the capability of fusing those styles is exemplary. This album stands out because it sounds fresh and creative, borrowing from others but only by way of influence rather than blatant plagiarising. The sequencing of the tracks is stunning and you never feel trapped or that the music doesn’t know where it is heading. Each track contains an astounding amount of detail that is only revealed after repeated plays. Underhand should be incredibly proud of this music and I cannot recommend highly enough that you should listen to The Secret History Of Nothing and support this band, who have clearly put their absolute all into creating an outstanding album.