(((O))) Review: The Shaking Sensations – How Are We To Fight The Blight? 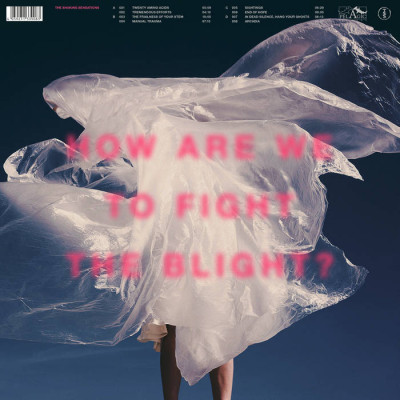 How Are We To Fight Blight? by The Shaking Sensations

The Shaking Sensations re-enter our collective audience with an unpretentious album that is sure to top many year-end lists. How Are We To Fight The Blight? is another addition to their grand tome of a catalogue. The barometer for their cease(to the chagrin of many) in releasing music was not based on a lack of success or an inner band schism but that their “circle was fulfilled”. You will be happy to hear that their audible dialogue has been rekindled and they have a lot more say.

TSS has been a staple in the soundtrack of my life. I had just found Post Rock and its instrumental subsets shortly after they released their last album Start Stop Worrying. Which I was basically floored by and practically all other instrumental music I’ve heard since has been filtered through the standard of having been exposed to their music first. Their baseline has long remained my gauge for quality and compositional craft.

TSS has done just the perfect thing grasp ahold of me. They’ve added a second drummer. My love of backline and rhythm has been rewarded immensely! The rhythm section forms the emotional backbone of music, and that has never been more true than on this release. Bass and drums choreograph a theatre of cascading rhythms and percussive bliss. They provide perspective and depth with their combined cadence being the footfall leading the gait of every track for pithy and terse song structures.

Striking and elegantly weaved earworm melodies aplenty, guitars reach out their tendrils to adorn and complement each song like lightning crawling across a turbulent sky. Doleful and plaintive, yet steadfast and resolute. As if they have collected the tears of many and distilled them into one ornate sound palette of lush full accompaniment. Their elongated and committed musical phrasing is a testament to how Post Rock is best represented in my opinion. Typecast? Nope! But modality in a musical formula that works. Expounding on ideas that end in music that has a sentient nature. A living idea that changes every time I hear it.

With How Are We To Fight The Blight? they have re-scaled the summit of our scene. One they helped bolster and fortify over the years. Effectively romanticizing everything I love about instrumental music. Audibly arresting and stirringly emotional, there are so many moments where this album forced me to stop and close my eyes: to listen, absorb, and reflect. It urges us to fight through the dark. Otherwise we could not get through to the morning, and its renewal.

It is so very difficult to pick one stand out track on this album. Better to be heard as one complete experience. Over and over again. Somehow they toe the thin fragile line between losing their shit and corralling all of the motives and ideas into a conscious audible opus. I have been published before saying I don’t believe in the concept of perfect. I was dead wrong and it exists in this album. Yes, I am biased. But so what?! All should now stand and grant them the ovation they’ve earned. How Are We To Fight The Blight? will go down as an artefact of what now may be post-modern instrumental music. The Shaking Sensations are one of the best bands making music today.