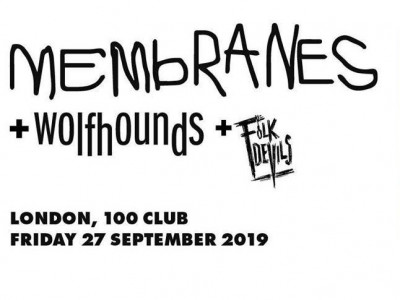 The Membranes at 100 Club

It came as a bit of a surprise when The Membranes complemented their tremendous raucous racket with an orchestra. Not only did it work, but they played many shows producing triumphant reviews that propelled them to headline larger than normal venues. It also demonstrated they still possess a fervently evolving vision. Tonight’s show at one of the last-standing London West End music venues reconvenes the band back to a-four piece, but they still have a surprise up their sleeves.

Before then, another band whose whole career has never been afraid to push their sound to newer progressive explorations, are the Wolfhounds. Their 2016 Untied Kingdom (Or how to come to terms with your culture) was their most expansive yet, and is arguably their most thrilling ride so far. What becomes instantly apparent is the expansion rolls on as they commence a half hour set of all-new material from a freshly recorded new album.

Andy Golding alternates between his tremolo-driven guitar attack and a Bubul Tarang and lapsteel, attached with an array of pedals for good noisy measure; he hammers away like an eccentric nutty professor. Their carefully constructed song arrangements incorporate intricate drum rhythms, catchy choruses, and a riveting intense cacophony of dense sound. The potential first lead-off single ‘I can’t see the light’ sees Dave Callahan’s vocals elevated to a glorious high-note chorus-led delivery. On this evening’s evidence, Untied Kingdom’s career-best status is under threat.

The 2019 version of the Folk Devils is most definitely a punkier, heavier beast than anticipated. They fly out of the blocks with a couple of robust punk speed-rockers. Vocalist Dave Hodgson donned in a zipped up to the neck black jacket with accompanying black shades is the band’s visually striking point, despite a rooted-to-the-spot stage presence. Their adrenalin-driven opening is hard to maintain throughout, but they do recover for a similarly enjoyable end-of-set flurry.

A special mention for the one-rehearsal, stand-in bassist who did a tremendous job (apologies for not catching his name). The image of the night might just be the enormous relief and huge smile on his face as he plays his last note while he removes his bass. A job well done, indeed.

The dynamic John Robb and his thunderous bass leads his merry men The Membranes to rampage through a largely curtailed set from their last two respective thematic-universe and nature-inspired albums. John is fully pumped up, taking full advantage of the exceedingly wide stage. Visually, you can’t take your eyes of him prowling up and down. While the twin guitar attack of Nick Brown and Peter Byrchmore pull off many guitar squeals and warped riffs with aplomb, as on ‘Do the Supernova’ and the skewed noise-funk punk of ‘Stone the Crows.’ The bespoke surprise of the evening is when punk icon Jordan provides a spoken-word voiceover as the band provide a subtle, restrained sound-track.

Inspired by a centre-stage cylinder shaped pillar, John Robb wants the crowd to dance, so he divides the crowd into A and B. A master at working an audience, he has great fun and quips, ”it’s like a stadium gig in a shed!” The whole band are clearly having a blast, and John’s energy radiates among the crowd. With John leading the cries at the end for one more song, they do indeed carry out two more for good measure. It is no surprise there is an exuberant atmosphere as people make their way out of the venue for their journey home.