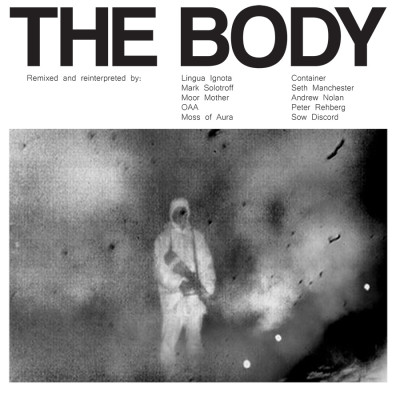 Remixed by The Body

Hello darkness my old friend. It seems The Body have now been around for twenty years. That’s a long time to be draggin’ such a heavy sack of misery and woe down the track. Twenty years of shrieking into the void and staring down an indifferent universe. Twenty years of the most inventive, inclusive, remarkable work in extreme music. They’re marking this milestone with Remixed, a collection that does exactly as its name suggests. If it doesn’t quite feel like twenty years to you either well, it took them until 2010 to put out second album All The Waters Of The Earth Shall Turn To Blood, which saw them really find their path and start to garner some attention. Since then the pace of their output has picked up dramatically. Including their many collaborations, Remixed is their eighth full length in the past three years. Just keeping up with it is becoming a challenge. I mean, there’s only so much crushing despair a body needs and frankly, I have enough of my own.

If a remix record seems an odd move at first glance, it quickly comes into focus as so obvious it’s surprising they’ve not gone there before. Not only is their discography split between a steady stream of collaborative works (Full Of Hell, Thou, Uniform, Haxan Cloak etc) and ones billed as The Body, even those feature numerous guests. Few bands have completely opened out and deconstructed their own process so enthusiastically while retaining their essential dark vision and abrasive sound. It makes perfect sense to see their work torn up and reassembled by kindred spirits. Half the tunes here are taken from their last album I Have Fought Against It, But I Can’t Any Longer, which saw the duo creating tracks from samples of their own playing, in much the way you might approach a remix.

That initial flash of absurdity comes from the club culture roots of the remix and an uncomfortable vision of Chip and Lee being dragged out onto the dance floor for a spot of ecstatic hands-in-the-air disco communion under sparkly lights. There is really none of that going on here but they lean into the possibility early. ‘A Curse’ sees the oldest source material (from All The Waters Of The Earth Shall Turn To Blood ) given the shiniest treatment. Moss of Aura is Future Island’s Gerrit Welmers and he brings a warm, yearning, 80’s glow to the track. Chip King’s screech bobs in a floatation tank of gloopy synth amid bubbles of perky vocal samples and hilarious syndrum fills in something like the mood music for Aaron Spelling’s descent into hell. It’s to Welmer’s credit that he pulls this off with a subtlety alien to everything in the previous sentence.

Sticking awkwardly to notions of dance, sometime touring member OAA drags ‘Adamah’ down into the techno dungeon and gives it a rough pounding, the vocals cut into sickly twisting loops. Fellow Providence type and genius of noise techno Container takes the brute despair of ‘Ten Times A Day, Every Day, A Stranger’ and pitches it into a busily winding storm of anxiety. Even the most tenuous, abstracted, idea of the dancefloor is then left behind as Mark Solotroff’s take on ‘Denial Of The Species’ leans into discordant drones and returns Chip’s haunted vocals to the fore. The album’s midsection is a touch more straightforward, giving you slighter twists on the originals. Moor Mother just versions ‘Off Script’, swapping out Chip’s vocals for her own dystopian mumblings over the backing track. Sow Discord’s take on ‘An Urn’ is all ashen sound and beats like blows. There’s nothing wrong with it, but this far in you realise this is exactly what you expect The Body to sound like remixed.

The final stretch is really something though. Peter Rehberg’s take on ‘Carry No Weight’ opens so slowly and quietly it effectively sets itself apart from all that has come before and crawls forward into a scoured and blasted dronescape filled with ghostly voices that oscillate between soothing and chilling. Here, at a point that feels more distant than any other from the band’s own contributions is something that gets closest to their greatness. For all the swarming darkness in their music what The Body offer us is a hand to hold, a walk around a deep black lake, its calm surface a mirror dimly reflecting back our own horror, an acknowledgement.

‘Western Dub’ finds their regular engineer Seth Manchester (of Machine With Magnets) spin out the slightly unlikely reggae sample of ‘The West Has Failed’ into a fully darkside dub tune offering the possibility of interesting left turns to DJ’s of a certain stripe. Lastly, Lingua Ignota brings an awesome take on ‘Hallow/Hollow’ dialling down the bombast to a steady drone and a blank incantation “Father does not judge” that walks the line between comfort and threat. Remixed rather drops the ball on their astonishing run of dramatic and evocative titles but underscores on the one hand the particular nature of this collection and on the other the limitless reach of The Body. There’s really nothing here you couldn’t conceive of them arriving at themselves, nothing that goes so far out that it loses whatever it is that makes everything they do theirs no matter how far they stretch it. Remarkable.