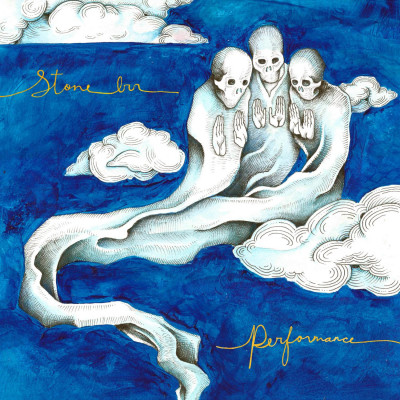 Take the artist’s name, Stone Irr and the cover of his second album titled Performance with those skeleton ghosts somewhere in the sky, and to any music fan, the first thought that would come to mind is some form of metal, gothic death metal maybe.

Now, the immediate reaction that would follow would depend on whether you are a fan of one or any metal genre or not. The first group would probably bet their chances, while the other would probably run away as fast as they could. And that would actually amount to two mistakes – hardcore metal fans would be bitterly disappointed, while the other group, particularly the one that fancies melodic indie with a lot of lush vocal harmonies would be on a big miss, since Performance is an album that would probably end up on their frequent listening pile/playlist.

But then, those who are more familiar with the album covers (and the music) of the bands like Okkervil River and Songs: Ohia would probably recognize the handiwork of William Schaff who did their covers and this one too, and would immediately get an inkling that something suspicious is going on.

And that suspicious stuff lies in the fact that Stone, a guy from Indiana who relocated to LA has spent too much time with his Beach Boys, ELO and possibly another harmony/chamber pop albums like the iconic Left Banke material, or say XTC’s Skylarking or any of their later works. Oh, and he has sucked in every bit of the intricate melodic detail and passed in through his filter because tracks like ‘Nosedive’ or ‘Calm’ (or any other here) just beg to be heard. Just take a listen, also to the brass arrangement on ‘Storyline’ and you’ll realize that Stone has got the touch to come up with something substantial, inspired by others or all by himself.

So what about the cover? Maybe he was just sad, in a mournful mood or it could be those darkish undertones in his lyrics… Whatever it is, Stone Irr’s Performance brings harmony music to the level that even hardcore metal fans might turn into converts. Those others would possibly get used to the cover, or just not look at it, or they just might get Stone Irr’s stance.