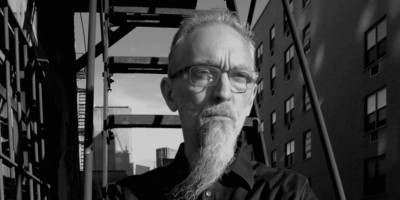 I am pleased and a bit amazed that I am continuing with this musical journey. I have to thank all of the people that come out to the shows and spur me on to making more recordings.

With his instantly recognisable guitar tone, Norman Westberg is best known as a longtime member of Swans. He was there from their inception and throughout the band’s career and also from when they reconvened as a band. Although he is no longer a full time member of Swans, he helps out on the bands forthcoming new album and aside from that, he has a brand new solo album, packed full of sublime ambient tracks out very soon. We had a chat with Norman to hear all about the album and his transition from band member to solo artist and upcoming tour with Swans’ Michael Gira as well as career with Swans, Heroine Sheiks and his many other musical projects, working with Lydia Lunch and Foetus and who his musical influences are.

E&D: You have a new solo album coming out soon. Can you tell us all about it and its creation?

Norman: It was recorded as a dress rehearsal for a festival show that I fell into. I wanted to see how the Telecaster would sound and what an hour set would feel like. I have a homemade CD of that set that I was selling on my tour with DBUK. I will have the CD along with the double LP with me on the October tour with Michael Gira.

E&D: Is the album in a similar musical vein to your last album After Vacation?

Norman: After Vacation is a more plotted out group of recordings rather than my usual rambling conversations. So, the answer is yes and no. They start in the same place, but end up in others.

E&D: What inspires you as a guitar player and as a musician today?

Norman: I love discovering new music. I just did a tour with the Denver band DBUK. They are my favourite band right now, daily listening. Very exciting to meet and play with new people.

E&D: How did you find the transition going from playing in bands to playing on your own?

Norman: That was pretty easy to deal with. A minor downside is that I can’t hide when I do the solo thing.

E&D: You are playing a few live dates next month with Michael Gira. Are you looking forward to that and will you be concentrating on playing your new material or will it be a combination of all your past and present material?

Norman: That will be a cool tour. We did a west coast tour earlier that was fun and easy. I will be playing what I play. People that listen to my music may recognise some of the parts. In general, they will recognise my style.

E&D: There is a new Swans album coming out that you play on. What are your contributions to the new album?

Norman: I play on a couple of songs, maybe three. Also contributed some guitar to an intro piece.

E&D: Would you still consider yourself a full time member of Swans or are you just helping out?

Norman: I am not a member of Swans at the moment. No plans for the foreseeable future. I help where and when I can.

E&D: What was the most memorable gig you played with Swans?

E&D: Did you find playing with the band both live and in the studio a cathartic experience?

Norman: Sometimes. There is always a lot of hurry-up-and-wait going on. I really enjoyed my spot on stage, great view of Chris and Phil.

E&D: How did you come to join Swans originally and what happened with the band breaking up initially?

Norman: Swans was always losing and gaining people. I think that the last version that I was in was the longest running group of people. I had met Harry Crosby at a house party that I was playing with Carnival Crash. He also hung out at the same bar that I did. He asked me one night if I wanted to audition for the band he was in. Good timing and I was prepared to play, even though it was very different than other auditions that I had been to.

Norman: I had let Michael know that I was available for serious playing. Think that he called me a couple months later with the plan.

E&D: Swans were based in a New York that was dangerous and unpredictable, was that a massive change from your upbringing in Detroit?

Norman: The big difference between NY and my Detroit at the time was a matter of transportation. You had to have a car in Detroit, not in NY. Many more rehearsal spaces and people looking to play in NY as well. I grew up in Detroit proper, single family house, nice neighbourhood, great parents, a lot of friends and freedom. I moved to NY in 1980, by then the area that I grew up in was getting very dangerous.

E&D: What was the city like in those early Swans days and was it a struggle being in the band and surviving in the city at all?

Norman: I believe that anywhere would have been a struggle at that point. NY was dirty, loud and not very friendly. I did what I could to change that. Saying hello to people, picking up stuff. May have come off as a bit of a crazy myself. I had a job, a place to live and a few friends. Also, a focus once joining the band.

E&D: You still reside in New York City. Is it unrecognisable from the city you knew or is there still a grittiness that will never leave?

Norman: Any city anywhere changes over time. Some parts of NY have changed to that point of a ‘where am I?’ thing.

E&D: Is there still an underground/noise/no wave scene in the city or is that a thing of the past?

Norman: I imagine that young people will always have a scene. I am not really involved with any of that at this point.

E&D: You played on albums by Jarboe. How was it working with her outwith Swans?

Norman: I went into Wharton’s studio to play some guitar for her. Michael was there directing, so it was still kind of Swans. It was fun.

E&D: You were in the band Heroine Sheiks. Can you tell us how that band came about and what were some of the highlights of playing in the band and will you ever do anything again at all?

Norman: Heroine Sheiks existed before me. I joined on the advice of George Porfiris, the bass player. I got John Fell into the band, which was not much of a struggle to convince him. Great band of brothers. We all were enough alike to get along, and different enough to make some weird music.

E&D: You also played with Foetus for a while. How did you end up playing with them and what was that experience like?

Norman: His first foray into having a band. Started with Algis Kizys, Bob Bert and Raymond Watts. First tour ended up with Ted Parsons playing drums. Jim was around and expressed this interest of doing a band. I played on the Wiseblood record, The Fudge Punch before that.

E&D: Can you tell us about your other musical endeavours in the bands Hidden Rifles, NeVAh and Five Dollar Priest?

Norman: NeVAh has started up some easy rehearsals again. We are Vinnie Signorelli, Algis Kizys and me. F$P was a project that Ron Ward of Speedball Baby! was working on with Bob Bert, Patrick Holmes and George Porfiris. Just a bunch of friends from around the NY scene. Hidden Rifles is a Matt Wascovich project band that came out of Scarcity of Tanks, based in Cleveland, Ohio. There is a new band, Flowers Destroy. We finished the backing tracks, now waiting for Matt to finalise.

E&D: You appeared in Richard Kerns film The Right Side Of My Brain with Lydia Lunch. What are your memories of making the film?

Norman: That was fun. I had just met Lydia. My first and only film appearance as an actor. Not much of an actor, but an actor non-the-less. All of the push-ups were not a stretch from my usual day at that time.

E&D: What was the experience of working on the music to Kerns film Goodbye To 42nd Street?

Norman: I don’t have any recollection of contributing to that one. Could be the Stinkfist project of Lydia and Jim’s. I went into the studio to play guitar and also opened for Swans at Danceteria.

E&D: Do you miss the way New York was?

Norman: Nothing to do about it. Try not to waste too much energy lamenting about the past.

E&D: Did you ever pursue any other acting roles or working on any more films in any capacity?

Norman: I am getting some music into film right now. I did not pursue acting with any kind of seriousness. That was my one role, playing myself.

E&D: What were your very first musical memories?

Norman: I have older sisters and a brother. I remember going to the store with the family so that my sister could get the latest Beatles 45. My brother tells me that I destroyed his Elvis records. I have no memory of this, must have noticed how well they could fly. I took care of my sister’s records and would ask if I could listen on her record player.

E&D: What was your musical upbringing in Detroit like and were you playing in bands there before you relocated to New York?

Norman: I started a band with a friend that I met at the punk rock club, Bookies. A friend from my childhood was the singer, Route 666. We played a few shows locally but never found a drummer that really fit with us.

E&D: Who are some of your biggest influences as a guitar player?

E&D: What have been some of the highlights of your vast and storied musical career so far?

Norman: I am pleased and a bit amazed that I am continuing with this musical journey. I have to thank all of the people that come out to the shows and spur me on to making more recordings.