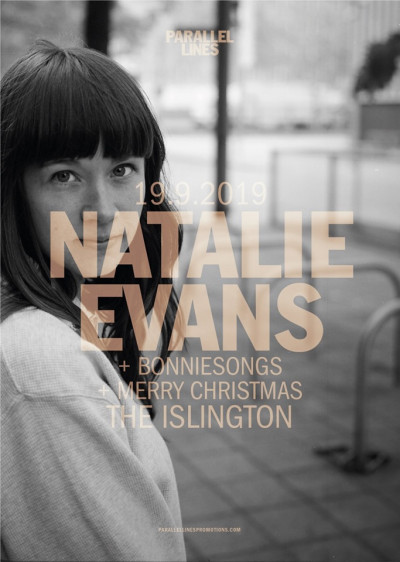 Natalie Evans at The Islington

Natalie Evans, since the release of her daydream debut Better at Night, has been putting her hand to a lot of new sounds as of late. She has started to appear with a full backing-band, with her love of math rock adding new dynamics to a far grander sound then her solo offerings. But for her tour, in celebration of the re-release of her EP Houses, she was back to basics in the comfortingly intimate surroundings of The Islington with her tour-mate Bonniesongs – creating a one-two power hug of transient tales and nostalgic narratives.

First on the set was a very special treat indeed, with two members of Tokyo’s Merry Christmas settling into their new UK home. Their brand of quirky, upbeat, twinkling campfire songs were instantaneously charming. From their bubbly stage talk, to their xylophone-bright melodies, it was a sugar-rush of childlike glee that covered a very genuine friendship that burst through. Hopefully, the rest of Merry Christmas can make it to the UK – because the heart-breaking idea of them being apart is something that simply should not be allowed. They were the perfect trendsetter for the evening, a feeling of a warm fairy-lit hug in the comfort of your living room.

Next was the Irish-born, Australian-raised, and (by her own omission) Scandinavian-sounding Bonniesongs. Its perhaps not only Bonnie Stewart’s diction that invites a Scandinavian comparison, but a similar sparseness to her compositions that allows everything to breath. There are elements of pagan folk to her looping rhythms and ambient soundscapes that are like shoegaze ballads without the shoes but with far more gazing. With a more reflective, stark tone than Merry Christmas, Stewart nevertheless managed to bind the room to her whims as she cast spell after spell to exude the same explorative charm of finding a secret garden by moonlight. The highlight came with the rhythmic, breathy rendition of ‘Ice Cream’ in which she captures the audience by metronome before dropping weightless into a wonderful vocal freefall.

Natalie Evans is an extremely talented individual, and her greatest talent is her ability to make complex rhythms and compositions sound like simple bite-sized melodies. Her mixture of classical tinged virtuoso playing and math-infused polyrhythms manages to completely sidestep the obtuse trappings of both, with a weightless stage prescience deftly mixing the top 10 chart of Ancient Greece with the star gazing of Clapham Common. Focusing on material from her re-release, and away from her band that she has been experimenting with, she has an uncanny ability to close in the walls with her strings until you are left walking around in someone else’s childhood memories.

There’s an interesting dilemma with Natalie Evans. On the one hand you want her to expand and flourish with a full band, but there’s an undeniable charm to how she fosters a hospitable dynamic with the audience on her own. She manages to make every harp string, piano note, or guitar strum a warm sensation that dances and prattles. There are a few omissions, most notably the sublime ‘Lyre Song’, but the whole set flies by like a river breeze. It’s hard not to come away optimistic from evenings which so effortlessly exude such charm, and Natalie Evans is emblematic of a small scene of songwriters who assuage the normal dark introspection with something far harder to capture – harp-gold happiness and the boundless sunshine of youth.