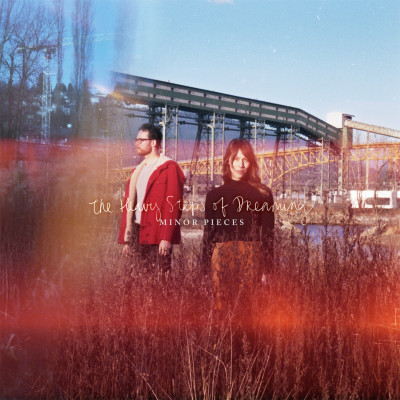 The Heavy Steps Of Dreaming by Minor Pieces

Franz Kafka once wrote that “A book must be the axe for the frozen sea inside us.” It seems that the fresh pairing of Ian William Craig and Missy Donaldson (an, up until now, unreleased music therapist) have taken this quite to heart with their new musical venture – Minor Pieces.

Since stumbling across Ian William Craig’s mesmerising album, A Turn Of Breath, half a decade past, I’ve eagerly sought out every piece of glitch-laden vocal manipulations that he’s put his name to like a chocoholic Charlie scrabbling for a golden ticket. With each new release came a wave of disbelief: How had he managed to outdo the seemingly insurmountable summit of his previous work? The peaks had to stop. This surely wasn’t sustainable. Then along came 2016’s Centres, with its jaw-dropping pieces ‘Contain (Astoria Version)’ and ‘Arrive, Arrive’, which set about shunting the already high watermarks up into a barely visible stratosphere. And then I caught him performing at that same year’s Supernormal Festival and spent the whole set rapidly blinking away some errant dust that happened to get in my eyes. Dust. It was dust, I tell you.

If this all sounds like fawning, well, it is. Although that’s not to say that he can put no foot wrong in my, admittedly misty, eyes. Slow Vessels, with its stripped down variations, lost some of the immediacy and potency of the originals. And last year’s Thresholder felt a little too much like it had been cobbled together from the offcuts of previous records. With the announcement that he was linking up with a relative newcomer for a new project it seemed as if there was perhaps another left turn on the horizon but I really needn’t have worried.

From the off it’s clear that The Heavy Steps Of Dreaming is entrenched in affecting and poignant territory. Besieging electrical interference permeates the opener, ‘Rothko’ (either named after the abstract expressionist painter who opened up an artery or Chris Morris’ hanky-chasing dog), as if the ghosts of the interactions peppering the lyrics are trying to force their way in from another plane of reality. Tape hisses and warps. The crackle and decay that has led to previous comparisons to William Basinski is out in full force.

Track four, ‘Grace’, is a swirl of glitched tape and mangled voices fighting for coherence, for understanding. It smoothes out, trips, and begins again as if dishing out lessons for life. ‘Tender Fire’s vocal chords light up like flames alongside rushing static. Clouds of synths rumble as if rising out of a sonic pyre. Slivers of light glisten in the gloom. Faded faces flash by from a different past. There are Fennesz-esque ghosts in the machine. This is the haunting of existence. A knapsack laden with time.

Time and remembrance seem unavoidable subjects. The pair’s music gnaws like forgotten memories and treasured recollections coming back in broken fragments. Misremembered and patched together. There is no malice with this. Just a childlike innocence. An attempt to grasp these snatched thoughts. A smell passes and sends the mind racing backwards through a thousand days. But it’s not quite right. It’ll never be quite right. Acknowledging this imperfection is vital to understanding it.

There are images of melancholy abstraction painted throughout the lyrics. On ‘This House’ we hear of “Years told in vertebrae and the gutters of books” and that “There is wonder in this house.” Then, on the final track, there’s a line that seems to echo Jeff Mangum in ‘The King of Carrot Flowers Pt.1’ “This is the bed where I dreamt against you, until our limbs became transparent.”

It is acceptance that we all become ghosts. Ghosts, not as in chain-clinkers after death but, in our fading from the lives of others. A ghost invoked by a song, a scent, a word. The track’s title itself – ‘Shipbreaking’ – could be a metaphor for dealing with this, for thawing through the glaciers within. Splitting that track in twain is a vast swathe of fizzing lather. It cleaves right through with the bluntness of a butterknife, conjuring Kafka all over again. A driving avalanche of white noise that blooms, balloons, and smothers. It almost apes Sunn O))) with its expansive saturation and certainly recalls the startling sheets of Low’s Double Negative. Somehow it cleanses, reassures.

But this album isn’t all hefty reams of distortion – the pair exploit all of the various techniques that they have amassed over the years and regularly utilise acoustic guitars to gently drape a warm blanket of sadness over each of the songs. A heavy humanity. Fingerpicked guitar weaves in and out of their dual voices creating a feeling that is part Sufjan Stevens, part Carla Dal Forno. Quite often vocal performances will be described as “soaring”. For most that is hyperbole, for IWC it’s an understatement. Whilst previously he has struck out alone, here, with the accompaniment of Donaldson’s fragile tones, he can share some of the vulnerability which then leaves space for something greater, something wilder, to emerge. And Donaldson doesn’t waste an instant. She confidently stretches out between sanguine naivety and sceptical wisdom as bass synths throb and distortion bristles. Their lacquered vocals overlap and bounce against one another, fading up through washed out electronics. The clouds separate, light is let in. For in every note, hope.

Where Donaldson weaves poetic paintings, IWC cuts quicker to the chase. For example, on the track ‘Brávallagata’ we get choral swells clambering up through the strummed murk, elevating all around it as IWC intones that: “In order to be still, you must begin with being still and so I stayed that way for most of Christmas Day the sun sets in Reykjavik at the same time as it rises” And on the finale he seems to go back on the promises of the past with the line: “There’s a way that I try to contain you.”

It’s the sound of a heart swelling. Tears pinched in the corners of eyes. Few can honestly reveal and bottle such raw emotion as IWC. It’s not always when his voice is bellowing out in raptures. More often than not, it’s in the quiet, subdued moment. A blindingly relatable undercurrent within subtlety. On the track ‘The Way We Are In Song’ they discuss the inherent problem of being an artist. The representation of the self, of others. Never existing in the moment, always maintaining half an eye on the usability of experiences. Its availability to be adapted into song, lyrics, art. The dishonesty of existing this way. People misbelieving that they know the author despite that mask being a creation of the artist.

“Because the way we are inside ourselves is never like the way we are in song.” This honesty, in exposing the veneer, is heartbreaking. It doesn’t wallow. It stays still. It lets things pass. You cannot control everything. “You must begin with being still” The watermarks are getting higher again, and no, that’s not just a reference to my damned dribbling eyes.