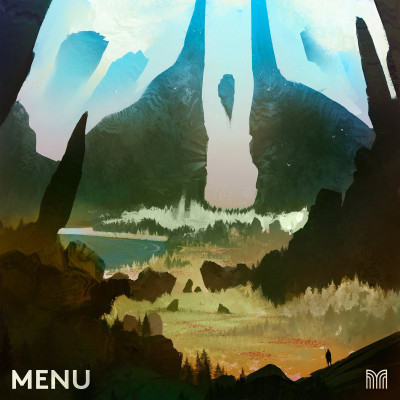 Menu: An Homage to Game Title Themes by Materia Colective

There’s a fun yet perfect logic about the simple existence of this album.  When people talk about their favourite videogame music, they talk about the emotionally sweeping accompaniment to crucial plot points or a particularly sweaty boss battle; the ones that really stick however (whether you want them to or not) are the ones that you’ll hear the most. Hence Menu, a collection assembled by the eclectic Materia Collective, which pretty much does exactly what it says it does.

Assembled here are 52 (!) tracks spanning over 3 hours of warm, nostalgic strangeness where the music cues chosen are reinterpretations of the most those most-listened to parts of games – opening tracks, “attract screen” renditions (the demo bits that appear if you don’t press anything at the start) and – yes! – menu screens. And of course it’s a mixed bag, featuring stuff from way back when up to some more recent titles, performed in a variety of styles that variously stick to the composers’ original visions or completely veer off somewhere else on the whims of those interpreting them.

It sets its stall out early enough, which is rather fitting. ‘Katamari on the Symphony’ retains its po-faced silliness from Katamari Damacy, followed by a fun-filled hyper-jazzy ‘Super Deluxe Grand Prix 64’ from Mario Kart 64 and an Emo-ish reading of Mega Man 2’s intro. Because of course it does. How much you’ll like anything on here depends entirely on how the original tracks push your memorial button or how much you can stand listening to something that once haunted you from when you were lost out again during “that bit” and got returned to the start screen and here I’m looking directly at you, theme tune from “Diddy Kong Racing”, made all the more delightfully torturous here by Daniel Nguyen’s largely marimba-informed interpretation (and yes, it’s also my most listened-to track here).

Out and out favourites of mine are unsurprisingly then already familiar favourites. Top of the tree is Fredrik Hathen’s ‘Opening Movie’ from Vagrant Story (which is one of the finest video game soundtracks full stop), Thomas Spargo’s gently pastoral retelling of ‘Bob, Let the Plant Go’ (which from what I can see isn’t the original title but if you’ve ever had the manic original bouncing around in your head, you will now be singing this title with it until the end of time) and a beautifully bittersweet ‘Postcard from Celeste Mountain’ from Ilium, from last year’s stunning Celeste, also illustrating that it’s not just old stuff represented here.

If you’ve actually read anything of this, then it’s possible that this collection may well be of interest. It’s naturally very niche and certainly not the usual thing we talk about on here. There’s a huge amount to trawl through and it’s definitely something that lends itself to dipping in and out of rather than sitting down for an entire evening with, and it’s something best shuffled so that you don’t just stick to the ones you’ve heard of. It’s very nature ensures that everything on here is a labour of love so even the most unfamiliar tracks from games you may well hate come across with the biggest heart. No Xenogears though. Grr.