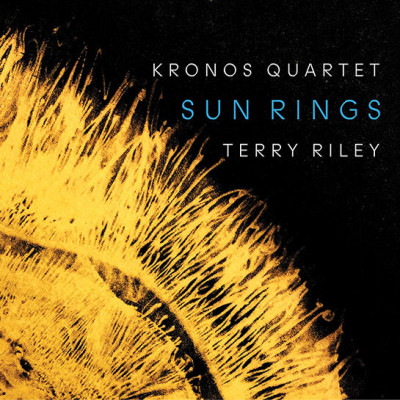 This is something that was always going to fascinate me, just from the sheer idea that NASA even has an Art Program. An ongoing project since 1962 and involving artists such as Normal Rockwell, Annie Leibovitz and Andy Warhol, the Program exists as a shared exploration of the infinite, with artistic results as beautiful and unconventional as the scientific side. As someone who has retained a love of the Cosmos (TV reference wholly intended there) since childhood, this link to the art world is something I was only too happy to explore.

Originally brought together in 2000 and completed in 2002, Sun Rings sees composer Terry Riley working with Kronos Quartet, interpreting sounds and images gathered by NASA from their various projects (in particular Voyagers 1 and 2). This might sound all too distant and – literally – otherworldly to be made sense of, but Riley found the project’s human anchor from novelist Alice Walker, speaking of the mantra that helped her through the September 11, 2001 attacks and repeated once more in the closing track of this collection: “…one Earth …one people …one love.” For a project created by a minimalist composer and four performers, there’s a lot to take in and a lot to process and express.

It all comes together rather beautifully. An opening overture comes from the cosmos itself, with snippets of narration explaining what these literally otherworldly sounds are and how they are created. When the Kronos Quartet appear in ‘Beebopterismo’, it’s in chaotic and kinetic form as its jazz-as-scientific-phenomenon title would suggest – a title stemming from Riley’s interpretation of the sounds collected and relayed by Galileo as it orbited Jupiter’s moon Ganymede. Sometimes frightening, sometimes frightened, sometimes joyous, it matches the universe’s own predisposition for creating patterns and sense within a vast space. The calm ‘Planet Elf Sindoori’ reflects this, with its musical phrasing echoed within itself.

The space created by the music allows the sounds of the solar system to take their place within these compositions. In ‘Earth/Jupiter Kiss’, pauses allow for deep cosmic booms to take prominence like galaxy-wide whalesong, and elsewhere (such as in ‘Prayer Central’ with its call of “now we must learn to depend on vast, motionless thought”) this is matched by a human choir. All of these frequencies, sometimes laid over each other, should really be an assault on the senses but everything fits; a feeling of balance and belonging that forms the heart of the whole project.

The marriage of what we humans create with what is produced far beyond ourselves is something I have been fascinated by for a long time, cemented ever since I found out what that image on Joy Division’s Unknown Pleasures actually was (PSR B1919+21, or LGM-1 (Little Green Men!), the discovery of the first evidence of a pulsar) actually was. Patterns and beauty and understanding are what links the macro of the universe to the micro of our own lives, and everyone involved in this project plays their part in bringing both of these apparently disparate concepts together so that the result is a singular idea that gives us both a sense of where we are just as much as reminding us that we are part of something so much bigger, even if that isn’t always a happy thought. Just as with Carl Sagan’s ‘Pale Blue Dot’ essay, Sun Rings is a champion of belonging, and is best experienced on a cloudless night spent with just you, this and all the stars in the universe.