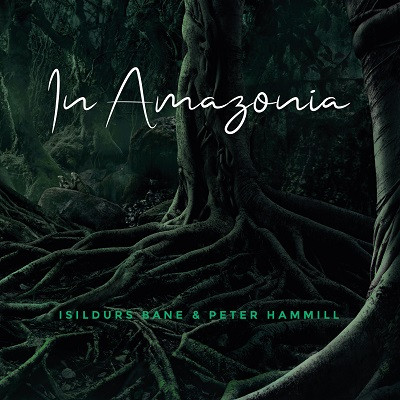 I can’t remember when I first heard Isildurs Bane’s music. So my memory is a little bit hazy. But I think it was a few years ago when I was in Houston Community College after listening to one of their tracks on Sid Smith’s Podcasts From The Yellow Room. And then I had completely forgotten about them. It wasn’t until I believe in 2017 when I bought Off the Radar. I listened to the album, which I thought was pretty good, and then I’d forgotten about them again. But it wasn’t until they teamed up with Peter Hammill from Van Der Graaf Generator on their new release, In Amazonia, I knew right then and there I needed my ears to listen to the band’s new album from start to finish.

Taking their name from J.R.R. Tolkien’s Lord Of The Rings as the one ring, Isildurs Bane have been around since 1976 in their hometown of Halmstad, Sweden. They bring the essence of Chamber, Classical, World, and Symphonic Music. They’ve worked with artists including Jerry Marotta, Japan’s Mick Karn, King Crimson’s David Cross, and Stick Men to name a few as part of their IB Expo that has been going on since 2005. They’ve also worked with Tim Bowness and Marillion’s Steve Hogarth who appeared on their 2017 release, Colours Not Found In Nature. Peter had previously performed with the ensemble group back in 2017 and will also this year on November 23rd at the next IB Expo in Halmstad.

Listening to In Amazonia, it is like they’ve created this film with an incredible score to life. And giving the latter part of the Marvel Cinematic Universe, which has now become like a fast food joint, the big giant middle finger. They’re bringing both real good music and cinema back to life with the intensity and unexpected twists to turn the knife around from a 360 degree angle. Some of the centerpieces that are found on this album, can fill up those voids inside.

‘Under The Current’ starts off with a guitar introduction that is played on a loop. Karin Nakagawa speaks and plays on her Koto while Calabrese’s echoing effect on his trumpet sets up this New Wave approach. The keyboards delve into this insane passageway and Hammill brings the doors to a close for all the infinite possibilities, to be free from all that has happened, have now been completely shut for the rest of eternity. ‘This Is Where?’ sees Hammill pouring out everything with gasoline, and setting it ablaze while more nightmares become very impulsive. Isildurs Bane raises the fires to go up a level as Samuel Hallkvist’s guitar goes to the extreme by following Peter’s arrangements. He’s like a conductor to go without any sign of stopping. And believe me, it is one hell of a beast that is ready to be unleashed.

‘The Day is Done’ sees both Mats Johansson and Peter Hammill tipping their hats to both iamthemorning’s Gleb Kolyadin and Marjana Semkina. It’s as if they wrote this piece as a continuation to Peter Hammill’s 12-minute epic, ‘A Louse Is Not A Home’ from his third studio album, The Silent Corner and the Empty Stage. It sets up this sequence to find out what has happened after the events of the song.

Peter has this structure of what is going on right now and is told through a narrative that gives the listener a sign of hope after the danger is finally over. The darkness will linger through. The opening track ‘Before You Know It’ takes us through the insanity of this person’s mind who has now gone completely bonkers. The music punches through the blaring foghorn-esque sounds from the keyboards as Andren’s drumming gives Peter the chance to go out in a blaze of glory by giving us more nightmares to come. They set up the tension by raising the levels up before the dooming bass and mellotron go into this bloody aftermath as the drone-like finale ends in a menacing demise.

This was now my third time listening to In Amazonia, and let me just say this in two words; Holy shit! This is an album that was very challenging and right in your face. I need to check out more of Isildurs Bane’s music to hear what I was missing. But for this amazing alliance, it is one of the best releases of 2019.