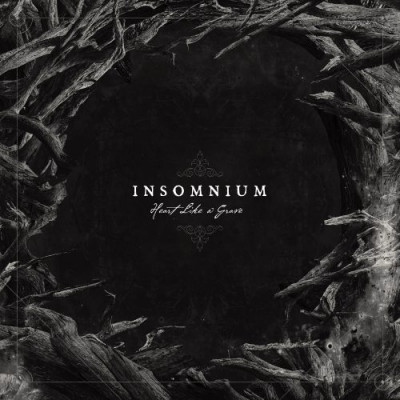 From the remote reaches of Eastern Finland, Insomnium have extended their influence across the metal world, slowly and steadily winning fans for their dark and brooding take on the melodic death metal subgenre. After plugging away for more than 20 years now, Insomnium’s latest albums in particular (2014’s Shadows of the Dying Sun and 2016’s epic concept album Winter’s Gate) have earned them a high status in the zeitgeist of heavy music, meaning that many were awaiting news of this year’s follow-up to Winter’s Gate very keenly indeed. For Insomnium, this year also saw the addition of former Sonata Arctica guitarist Jani Liimatainen to the fold. Liimatainen had filled in for rhythm guitarist and clean vocalist Ville Friman on several tours up to now, but has now been made a full member alongside Friman, as it has become apparent that his profession as a research associate in evolutionary ecology at York University is incompatible with the band’s relentless touring schedule. The fact that both members feature on this album only serves to add further to the intrigue.

Heart Like A Grave’s opening track ‘Wail of the North’ is an early indication of the direction the record intends to take, with half of the three-minute run time dedicated to a synth piano intro slowly building the atmosphere before the trademark heavy guitars and guttural sounds of lead singer bassist Niilo Sevänen come to the fore. This introductory track then segues into ‘Valediction’, the first song to be released prior to the album. Despite starting out like a regular metal song, this is actually one of the more considered songs Insomnium have recorded, with a much heavier reliance on clean vocals from Liimatainen and Friman during the verses than is usual. The blends and transitions between soft verses and heavy choruses make for wonderful listening, and a lot of credit must go to the production and mixing of the record for getting the balance exactly right, not just with this track, but throughout the whole album. In contrast, ‘Neverlast’ follows with a heavier and more aggressive tone, though still making time for some more melodic moments, especially with lead guitarist Markus Vanhala’s incredibly tuneful solo midway through.

So much of what makes this album special is encapsulated in the next song ‘Pale Morning Star’, which begins with a clean picked guitar intro and develops into a nine-minute epic, which manages to perfectly fuse together soulful guitar work with brutal vocals and powerful drumming from Markus Hirvonen. While Insomnium are rightly known for their themes of darkness and sorrow, tracks like this stand out for painting a hopeful picture of light at the end of the tunnel without compromising the melancholy which produces such a hauntingly emotive sound. The benefit of having an extra guitar in the mix becomes evident particularly in songs like this and the following track ‘And Bells They Toll’ (where clean vocals are again used to great effect), as it allows the band to further explore the construction of these epic atmospheric melodies without dropping the heavy aspects that they require to give the songs the gravitas they need. There is a simplicity to songs like ‘The Offering’ and ‘Mute Is My Sorrow’, which becomes more noticeable on repeat listens, as the layers the band build up in their songs can be stripped away and dissected to find effective riffs and memorable hooks underpinning them.

The album ends with a trio of lengthier tracks, including the previously released title track, which has the effect of slightly disrupting the album’s momentum, but does by no means diminish the quality of the music. ‘Twilight Trails’ is one of the heavier tracks on the album, offering a fantastic build midway through the song, ‘Heart Like A Grave’ again makes incredible use of all three guitars and alternating vocals to achieve a darkly melodic effect, while the instrumental closing number ‘Karelia’ provides a pensive way for the album to wind down. There will have been many who thought that Winter’s Gate may be the peak of Insomnium’s career, but Heart Like A Grave proves this to be entirely false. The record is an absolute triumph of the kind of sound the band have been carefully crafting for over two decades. Clocking in at just under an hour, it never wastes a moment as it fills the listener with layered structures, melancholic themes and epic soundscapes. Every element is expertly combined for full effect, as at no point does the melody get drowned out nor does the heaviness fall flat, which is all due to the perfect production. The album is a complete success and will propel Insomnium to even greater heights.