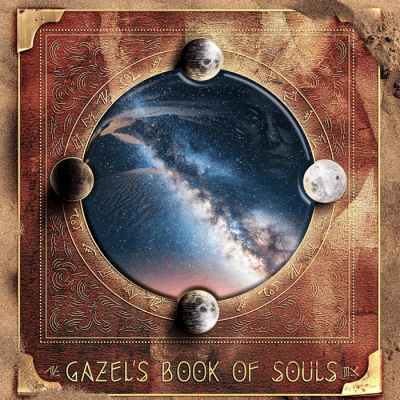 Gazel's Book of Souls by Gazel

There’s something undeniably joyful about Gazel’s Book of Souls. For a debut album, it’s remarkably assured – Gazel brings a unique brand of Middle Eastern pop to this concept record of a young girl’s attempts to investigate a mysterious fire and clear her grandfather’s name, while also exploring the inner workings of the human psyche through numerous different characters. It’s a bold album; there’s a lot going on, but it holds together remarkably well – there’s a sense of the magical throughout the album, yet still grounded in real world issues – as if Harry Potter blew off Hogwarts to study psychology. It’s an interesting storyline, and makes for an absolutely enthralling listen.

Musically, there’s a real variety on show here. Multi-instrumentalist Gazel uses a many tools here, from stirring violins, to a steel drum, to acoustic and electric guitars. Underpinning it though is a base of electronic pop music, synth led, but with traces of traditional Turkish folk musical influences. There’s a sense of nature meshing with the human mind, never clearer than on the tropical rhythms of ‘Walk On Land’, one of the most immediate tracks of the album. Elsewhere, Gazel shows off her vocal repertoire, from the choral exultations of ‘Mina’s Hymn’ to the spoken word ‘Cloudpatterns’. It’s a mesmerising performance; even the interludes (the acoustic ‘Half Humming’ and the violin-led ‘The Magic Interval’) have a distinctive quality about them.

It’s the core of pulsating electronica that truly holds Gazel’s Book of Souls together however. From the moment the windswept opening track, ‘The Forest’ segues into the gentle but irresistible ‘Pointing At The Moon’, Gazel’s sense of rhythm is truly captivating. The discordant, dubstep-influenced ending to the otherwise angelic ‘Mina’s Hymn’, the building pressure of ‘Rain is Coming’, the danceable flamenco stylings of ‘Ximena’ to the atmospheric dripping of final track ‘The Night Concierge’ – all create their own unique presence, while undoubtedly belonging. Even the slower tracks, such as the soothing ‘The Door’, the drum-led ‘You’re Not Funny’, and the menacing title track are beguiling, and truly add to the magically philosophical atmosphere.

To describe Gazel’s Book of Souls as a pop album may be off-putting to some. Yet the simplicity such a label suggests is simply not present here – the album has so many depths, so much to discover that that term is used to widen, rather than narrow Gazel’s scope. To create such a magical, joyful collection of music, particularly as a debut album, particularly while creating all the music singlehandedly is impressive. To then tie that music up in such an enticing conceptual bow is a phenomenal achievement, and has to mark Gazel as an artist to look out for in the coming years.