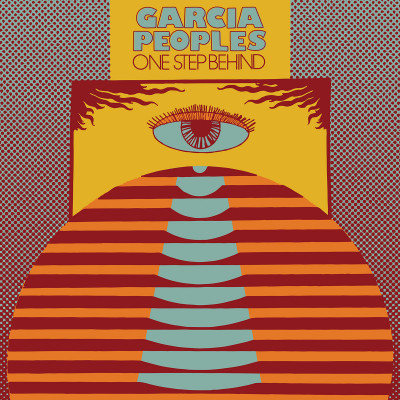 One Step Behind by Garcia Peoples

So, those of you who have been paying attention may very well have noticed the rather marvellous Garcia Peoples(GP) stirring up something of a scene on the latest release, Natural Facts. A sublime follow up to the also excellent Cosmic Cash, perhaps the most surprising thing, outside of how good these guys are, is that it appeared so quick. Well, hold on to your hats as they are back, a few short months later, with album three, and oh boy…it’s an absolute jam.

Jam is the correct word, as the album consists simply of two tracks. A stretched out jam reaching nigh on thirty of your earth minutes, plus a second shorter track, of which more later. Not content with bringing the jams to the live stage they now deliver on this super new release, and in doing so open up the doors of possibility (and perception) that little bit further. Woah, did we say open it? More like fling it wide open and let your mind overreact with the delightful soup of psychedelic jams bursting forthwith.

Considering the short nature of the songs on Natural Facts, it is quite a shock to hear the full magic of ‘One Step Behind‘. Drifting in on a wave of synths, evoking the grand old space rock of Pink Floyd, before long it is kicking up a funky little jam and keeping it that way for the rest of the song. There are moments when the lyrics come in, and the track evokes those gorgeous little melodies that made the songs on those earlier albums so delightful. It’s when the music drifts off of its own accord into moog territory, as modulated synths bubble under the surface, breaking through to remind us that we are riding the waves of a jam so tight that you don’t even need to hold on. The self-assuredness of the band is remarkable, and you really have to tip your hat to the absolutely superb playing throughout.

Which leads us to ‘Heart And Soul’, a song far removed from the epic jam proportions of ‘One Step Behind’ yet steeped in the kind of heartland folk rock that made the ’72 era of The Dead so alive. Indeed, this song could almost have been written for Jerry, at least to these ears, and it’s testament to the band that it easily manages to stand tall against it’s longer sibling. Gorgeously simple, against the previous jamming it is the perfect comedown after a heady trip. If GP were suddenly to stop releasing any more music, this would be the absolute perfect ending. Let’s hope that isn’t the case though, as we need much more of this kind of thing.

That’s about all there is to say about this album other than get off your backside and go discover it. Garcia Peoples may wear their influences on their sleeves, but over three albums they have evolved into one of the most exciting bands on this planet. If jams and good old rock and soul is your thing, along with a heady slice of skronky trippiness whenever the urge takes them, then GP are undeniably the most perfect band around. We love them here. Very soon everyone will love them. Over the course of three albums Garcia Peoples have already delivered a bounty of delights in just over a year and a half. Who knows what they will do next, but we hang on to their every note, waiting…