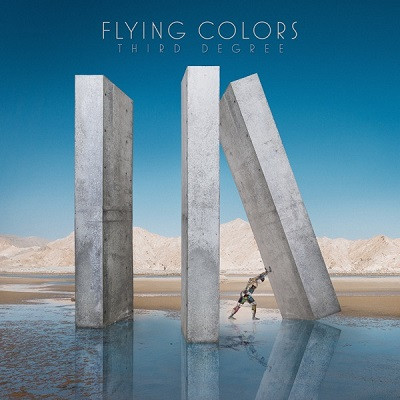 It’s been seven years since Flying Colors have taken their music on an amazing roller-coaster ride with unbelievable results. With two studio albums and two live albums in the can, it’s been a good while since we’ve heard from this incredible band. Now it’s been five years after the release of Second Nature. And here we are in the latter part of 2019. They’re back with a vengeance on their third studio release, Third Degree.

The amazing line-up including drummer Mike Portnoy, lead guitarist Steve Morse, keyboardist and guitarist Neal Morse, bassist Dave LaRue, and lead vocalist Casey McPherson. This is a band that aren’t just a supergroup, but a band of brothers that have worked well together with amazing chemistry by bringing Prog, Pop, and Hard Rock combined into one. And Third Degree has these moments that are touching, haunting, eruptive, melodic, and jazzy.

In an interview that Scott Medina did with Dave LaRue on October 14th from the Sonic Perspectives website, Dave talked about the qualities on what they wanted to do with Third Degree stand on its own from their first two releases. “It just became obvious to me that the performances, the recording, the lyrics, everything just seemed really a cut above the older stuff. But I liked that it continues to head in the right direction as opposed to us repeating ourselves or putting out a lackluster product.”

And that is what Flying Colors are doing, taking all the time they need to make Third Degree not just a continuation, but finding out where the next chapter would take them to. But listening to their new release, they are coming stronger than ever. ‘The Loss Inside’ starts off with an introduction between a blaring vibration between the guitars and organ while Casey’s vocals and Dave’s bass sets their engines running for Portnoy as he gets the fires burning brightly.

Casey hits those high notes throughout the midsections twice before Steve hammers down a volcanic improvisation while Neal goes into the towns of his inspirations, Keith Emerson and Jon Lord. ‘More’ sounds like a continuation of where ‘Shoulda Coulda Woulda’ had left off. It features some sinister riffs as it begins with Steve’s guitar sounding like a train that is ready to go before it becomes a bullet ride.

It switches into this calm after the storm with a ‘Moonlight Sonata’-esque section before reaching a climatic end of their nod to Queen’s Arena Rock years. ‘You Are Not Alone’ is based on Casey’s experience as a responder by rescuing people from the floods that were in the middle of Hurricane Harvey that hit the city of Houston, Texas on August 17, 2017. Beginning with an acoustic guitar rhythm that sounds like a slow mournful sequence that Steve does for this characterization of a person who has lost the love of her life, but never giving up. Steve gets the chance to shine on his improvisation before Casey and Neal helps the person by lifting her spirits up to head back home to heal. ‘Love Letter’ is Flying Colors’ nod to the progressive pop sounds of Electric Light Orchestra, 10CC’s The Original Soundtrack-era, Beach Boys, and the unsung heroes of Canada’s own answer to the Beatles mysteriously, Klaatu.

The 11-minute finale of ‘Crawl’ brings the curtain down for an amazing epic. The song begins with an opening that shows the band tipping their hats to the styles of Motorpsycho’s ‘Close Your Eyes’ meeting Muse’s Absolution-era. And then, all of a sudden, it ignites for their spaceship to return home by flying towards Earth with an orchestral lush.

Casey, Dan, Mike, and Steve head back for one more circle around our solar system with the string section on foot. I also love how both Steve and Neal channel those melodic arpeggiated textures in their solo’s as Portnoy suddenly becomes a powder keg to make his drum kit erupt as they go and do this stop-and-go sequence. It shows Steve firing up more of those engines before having the Queen influences rising from the ashes before Neal’s mellotron and his acoustic guitar gives us some insight by doing vocals as he gives Casey a little break on his vocals before he comes back to land the spaceship on dry land.

While this is only my third listen through of Third Degree, it shows that Flying Colors have hit a home run in the World Series. And they have come a long way by following the yellow brick road and making their way to Emerald City in the land of Oz. But, the quintet bring a whole new level in the genre of Progressive Pop.