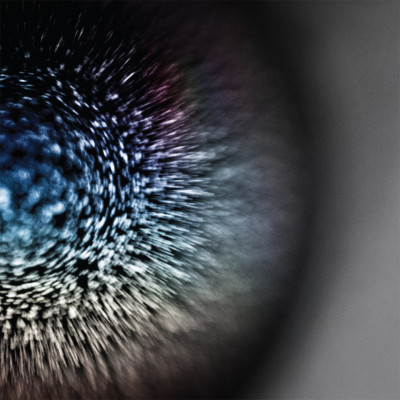 It’s been a fair while now since it made much sense to think of Emptyset as making techno in any way that the term is generally understood. They long ago abandoned the rigid rhythmic grid to explore ideas around bass weight and spatiality, their projects moving closer to sound installations or a kind of process art. It is still sound structured through technological systems though. Blossoms sees them seed AI with their own material and 10 hours worth of improvisation using ‘wood, metal and drum skins’. The result is 10 lumps of chewy, austere formalism. If Nick Cave or Richard Dawson’s new records have been making you faint with all their words and feelings then Emptyset have an antidote to all that emotion.

Blossoms is a suite of contorted sound pieces that feel less like the plant based track titles and more like a cairn of stones, fallen from the same cliff and stacked on the shore line. Each distinct yet clearly fragments of a larger whole, it seems you could stack them in any order you fancied. Sacrificing melody and rhythm before we even begin and moulded by machine intelligence it makes for a challenging listen. In terms of musical structure it does just about hold onto metre, bringing some buried, innate, sense of form. Still, the tracks feel like interchangeable products of an endless production line. Hunks of synthetic sound, formed under great strain and coughed out, one pixelated bolus after another.

On Emptyset’s last album Borders they built a couple of instruments of their own (a drum and a large stringed instrument), fed them through a system of analogue electronics and performed it live. Blossoms is both a development and an inversion of that approach gathering up a much larger stack of recorded input, feeding it into the system and waiting to see what develops. It often feels like it scoops up a loose fistful of the input material and hurls it at the virtual wall, resulting in a series of textured thuds and their dripping aftermath. ‘Blossom’ is dark, almost subterranean, hardly bucolic. ‘Bloom’ sounds liquid, ‘Pollen’ somehow like birds on electrical wires but all these impressions are fleeting. ‘Axil’ comes midway through and brings that sense of sound within a specific space familiar from Material and their other earlier works. ‘Stem’ is appropriately like the death rattle of a sinister machine, stuck in a fading loop. The final ‘Clone’ glimmers briefly with light and hope before switching to a kind of power tool glide of noise.

You have to wonder how they came to settle on these particular tracks, how infinite the possible variations might be, how many days worth of this they sat listening to and how close to madness that process might take you. It seems almost certain to be a false choice. The manifestation of the project as an album seems to do it a disservice. Although it was probably largely concocted on laptops it shouldn’t be listened to through their tinny little speakers. It demands great volume, enough to become an encounter with sound as a physical presence. In keeping with recurring threads in Emptyset’s work it speaks to sound as an occasion or place. As such, it’s less than ideal for playing in the kitchen as you cook, trust me. Happily, they are evolving the project for performances that should deliver this kind of immersion.

A tough listen, Blossoms is challenging to think and write about as well. So, in the spirit of discovery I made an attempt to get AI to review it. With admittedly limited success. “Your query did not yield a result make sure it is an English(!) query that is general enough to yield enough source documents through a search engine” was the first response. A second attempt found an appropriate range of sources but dumped the Emptyset material it collected and gave me a disjointed treatise on AI. When I narrowed the focus I was left with a cut up of just three pieces, an interview and a couple of reviews. It did not yield any hidden wisdom, or anything amusingly wonky or odd to include here either. Further refinements may have provided something worthwhile but the lesson is, to have output you have to have input and how you frame that input is crucial.

Concerned about the alienating ideas around AI (Accept your obsolescence human. Behold the future etc.) Holly Herndon called hers ‘Spawn’ and trained it with choirs for her album Proto earlier this year, producing astonishing music which is equally odd but far more approachable simply for the inclusion of the human voice. Emptyset have different concerns, picking over the slag heap of alien technology for new forms, an emergent non-human musicality. The duo have spent more than two years with programmers pioneering artificial intelligence systems in neural networks to develop the system for Blossoms. Apparently March saw a breakthrough bringing ‘the kind of reach and complexity’ they felt was required. Evidence of that seems buried in the code.

What we get here is an uncanny valley version of Emptyset. Almost like it but somehow disturbingly blank and misshapen at the same time. Here in its early half formed phase is where this approach is going to offer the most intriguing results, beyond chaotic static but short of smooth reproduction there are possibilities. Once AI generated music perfects mimesis of established modes it’ll probably come to seem as vaguely impressive but basically bogus as those animatronic waxworks in theme park dioramas. The flower gag of the titles comes from the ‘seeding’ of Emptyset material into the AI. They run with it but the life they’ve grown here is more like something monocellular, the living slime that coats that cairn of rocks on the beach. Alive but primordial, the challenge now is to mutate it into new forms.