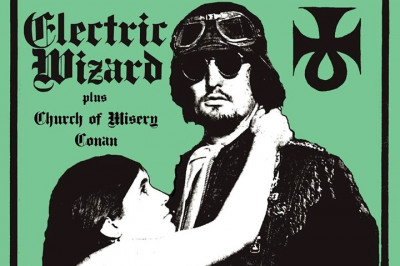 If you’ve been to a gig at the Empire, chances are you’ll have had a pint in the Defector’s Arms beforehand, a rather splendid pub whose name alludes to a Cambridge Spy ring who used to meet there and discuss state secrets. Well whoever’s idea it was to hold a special Electric Wizard merch stall upstairs is a genius – A) because the pub’s space ‘The Snug’ is very pleasant and B) because the Empire is absolutely rammed so anything that means less time faffing around in there is great. Seated tickets are sold out, so get your butts inside for Conan, who you can feel playing while your waving your phone at the ticket guy. If you were disappointed that The Obsessed had to pull out of tonight’s bill then you got a bloody good replacement.

Everything about Conan embodies the primitive spirit of their heroic namesake from the Robert Howard books and the Arnie films. They play truly humongous riffs with a low-end like the thrust of a battering ram – tuned to drop-F don’cha know? – but the riffs and beats are also quite catchy in their own way, or memorable at least. I think this is the fourth time I’ve seen Conan, and the only complaint I’ve ever had is that occasionally I’m a bit unsure how much I like some of the vocals – for purveyors of “caveman battle doom” they’re generally pitched quite high and screechy rather than low and growly.

Well, I’ve come in for what must be the end of the first song, or towards the start of the second, and this clearly is not going to be a problem tonight, judging by the double vocal onslaught I’m witnessing: one guy doing the more expressive lyrical stuff (as much as that’s a thing with Conan) and the other guy just holding long, low growls for quite a few seconds. They’re clearly a well-toured and well-honed live band – having spent the majority of the year so far playing the UK, Europe, the US and even Australia/New Zealand – getting the balance of raw heaviness and tight, punchy playing absolutely dead right.

They’re especially good at dropping in blast-beat-style double-kick parts and crusty up-tempo riffs from out of the slow, trudging blue yonder – that good old double-kick you feel in the chest. I don’t know or catch any of the songs titles, which is both bogus and sad; I fully intend to return home and listen the hell of out of their four albums. Whichever song they close with, it’s killer! Characterized by a slow and broken beat to which the drummer keeps adding further subtle elements of complexity, it’s got the massive riffs, the droning mountain of low-end feedback, and a the wah-echo, noise-freakout ending with wild vocal ad-libs to cap it all off. I honestly think that Conan will come to be seen alongside absolute legends of the scene such as Sleep, Bongripper and The Wizard itself. They’re probably well on their way already.

What the hell would we all be listening to now if Black Sabbath hadn’t existed? Just listening to fast metal tuned to E-Standard I guess. As many stoner/doom bands have before them, Japan’s Church of Misery provide us with subtle visual clues to their influences. If a giant CoM stage banner using Sabbath’s angel/devil logo (known as Henry), the famous Vertigo swirl logo from Sabbath’s early releases, and the Sabbath font wasn’t enough, they also play several riffs that are – bar a couple of variations – straight out of Master of Reality: most notably from the original stoner-rock song, ‘Into the Void’, which people start humming during the CoM set. Throw in some heavy psych, a serious obsession with serial killers, and some proggier touches, and you essentially have Church of Misery.

But somehow Church of Misery are so much bigger than the sum of their influences. Live, in fact, they’re bloody amazing. Ruthlessly tight, frantically energized, dancably groovable, and audaciously heavy, they’ve captured the essence of psych, stoner and doom – and everyone goes nuts for it. Probably their most enjoyable trick is playing a good old pentatonic blues groove, very low and very heavy, and then launching into a fast, quite ornate solo/jam section, performed with almost virtuoso skill – then, following a beautiful cross-over lick, straight back into the groove. Add to this the fact that founding member Tatsu Mikami is not only a beast of the bass, but – wearing his bass slung as low as it is tuned (I mean by his ankles kind of low), swinging it around his head Hendrix-style – he’s super-cool to watch. As is vocalist Hiroyuki Takano in his ‘Stop the Vladness’ t-shirt, who generally doesn’t play another instrument on-stage and therefore has a lot of freedom to improvise and to get carried away with wavy hand gestures. You’re starting to relax into the proceedings, getting a little hot so you remove your hoodie, and Takano busts out a theremin just as you coincidentally reveal your Wolvennest t-shirt (my only other reference point for theremin usage in doom), and everything starts getting very groovy cosmic ambient, baby. Church of Misery? No way. More like Cathedral of the Ludicrously Fucking Enjoyable.

Electric Wizard always come with a kind of auto quality-barometer: if you’re still watching the band themselves despite the sexploitation/psychotrash/phantasmahorror visual display projected behind them then you know they’re doing something right. We’re all psyched up following CoM anyway and then the Wizard use ‘For Whom the Bell Tolls’ and Frost’s ‘Procreation of the Wicked’ for their opening music. And then the dirty riff for ‘Witchcult Today’ comes in and you remember why you keep going to the see the Wizard every time they’re in town. If ‘Black Mass’ the track sounded a little derivative of their older material upon first listen, it grew on me upon digesting the rest of that fine album, and now sounds positively classic in the live environment. ‘Return Trip’ is contender for the most obnoxiously-nihilistic Wizard tune, with a beautiful, teeth-rattling low-end. If you’re still in doubt about the latest album Wizard Bloody Wizard, with the cleaner production and straight-up 70s rock vibes, you’re gonna wanna hear ‘See You In Hell’ live, and be humming that riff for days to come, especially when coupled with a particularly choice mixture of video clips, drawn exclusively from Lavey’s Church of Satan rituals.

It’s a shame that ‘Incense for the Damned’ is the only song played from Time to Die, which – while, as I say, its predecessor Black Masses was great – marked a return to a slower, darker sound. Still, it’s a banger, and everyone’s pretty fired up by now so the pit’s really surging with some proper feet-in-the-air kind of extravagance – no mean feat, actually, given how slow the song is. “I vant to drink your blood” Oborn informs us, in his best Bela Legosi impression, and another of those ultra-simple, ultra-awesome riffs come in for, of course, ‘Satanic Rights of Drugula’. It’s easy to overlook the importance of Oborn’s vocals to the Wizard, but they’re incredibly distinctive and never more so than in the live arena; they’re especially expressive on ‘Drugula’, combining growls, wails, and moans, and Jus makes excellent use of a Lemmy-style mic set-up: he doesn’t want to see us either. Liz Buckingham peels off riff after nonchalant riff, drummer Simon Poole brings a confidence and rhythmical flair to the proceedings (playing it cool on a raised plinth with reverse-crucified beauties projected behind him), and bass-player Haz Wheaton swaggers around keeping the groove going, baby.

The Wizard may have cleaned up their sound a little since the old days of playing The Underworld, losing a little of their grit and rawness. But what’s left is a very solid band whose playing demonstrates a great deal of practice, their heaviness now coming from tight parts as much as amps and distortion. Furthermore, you get the impression they actually enjoy playing together these days. I doubt there’s anyone in this audience who isn’t waiting for ‘Funeralopolis’, and I can’t imagine there are many shows where the Wizard do not conclude on a wild grinding journey through a funeral planet, smashing human zombies and corporate maggots on a planet of the dead, eventually beginning to wind down, warheads detonating on-screen, mushroom cloud of sickly fug, sweat, distortion, feedback, applause…

There were motorbike chases, lesbian vampires, and leather-clad dominatrixes on the screen? Really? I hadn’t noticed.