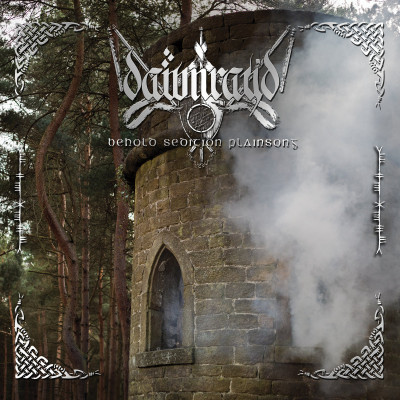 I would love to be eloquent, intelligent and poetic like the lyrics on Behold Sedition Plainsong, but I find the need to be direct like the music to alert all too how amazing and vital this album is. Dawn Ray’d has released the manifesto to enact change and it’s the fingerprint of the resistance. This, the third release by the band, sees a glorious recording fleshing out its blunt force with a rich sound which enhances both the battering black metal as well as the folk aspects in the lyrics, violin and acoustic guitar.

Now I know violin, poetry and folk don’t fit in with the rest of that description, but this album is driven by huge, fast drums and tinted with folk aspects but the poetry is the muscle that carries everything through the vocals. Whilst the lyrics are constructed in poetic form they are delivered as the harshest of black metal screams. The advantage here is the flow allows tangents of rhythm to cross over, weave round or join the utter fury from the drums. When the vocals aren’t ripping deep into your conscience, the violin is fired up by vocalist Simon Barr and only ‘A Stone’s Throw’ goes for the full acoustic, light vocals and relaxed violin. Elsewhere this album has lighter flecks but is on the whole urgent, heavy and absolutely essential in the current climate.

Lyrically, subjects tackled aren’t that uncommon in metal genres, but it is far more thought out than simple slogans. ‘Like Smoke Into Fog’ targets the police in its handling of protest and the judiciary’s role in deportations while ‘Songs In The Key Of Compromise’ delves into religious systems of control. The two tracks which really stand out for me tackle immigration policy and the environmental damage caused to our oceans. ‘A Time For Courage At The Borderlands’ takes the listener to the other side and asks what if it were you that was being refused entry and turned back to the situation you were forced to flee from. The musical background starts with some mournful acoustic guitar and violin before building into a blast beating flurry when the vocals bark:

“Can you imagine the horror
Of a fence they won’t let you through?
Another country refusing help,
What if that was you?”

‘Salvation Rite’ is another song filled with thought provoking lyrics as Barr ponders whether or not “the animals know something’s wrong” and if “they think they are to blame” for the pollution chocking the oceans. In both these songs the theme of human actions causing pain to both human and animals shows the divergence in fortunes which capitalism has encapsulated the world in. The anger and sorrow in the music mirrors the lyrical questioning to create a powerful introspection of the damage we have done. These topics are urgent and it’s great to see them being framed in a way that is accessible yet challenging.

Dawn Ray’d has produced a sublime piece of work which never struggles for a balance between quiet and loud and the structure of each song is varied. Placing together black metal, folk, hints of crust and a social conscience is not an easy task and simply put there really isn’t a band that does it better.