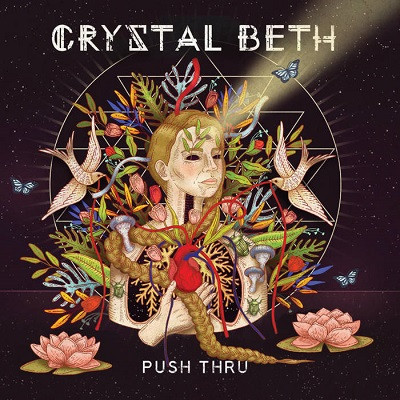 Push Thru by Crystal Beth

7D Media have always peaked my interest this year. Whether its Deep Energy Orchestra, Security Project, AKKU Quintet, Sonar, or Stick Men, Trey Gunn’s label would make my ears park up for something that will be an interesting ride. And one of the rides that I’ve embarked on is an artist named Crystal Beth. So some of you may ask, “Who is Crystal Beth?” Crystal Beth is Beth Fleenor. She is one of the most unusual artists to come out of Seattle. With her loops, chants, delays, and pedals, Beth destroys the rule book with a gigantic battering ram that is ready to hit at any second.

She’s been around since 2010 fronting her own group, Crystal Beth & The Boom Boom Band. She creates her own primal scream that is completely out of this world with some beatboxing scenarios that will make you want to take notes from. Listening to her debut release this year from the 7D Media label entitled Push Thru, she’s bursting the flood gates wide open.

While her vocals are compared to artists like Patti Smith and Yoko Ono, there are some stronger elements of Bent Knee’s Courtney Swain, Tom Waits, and country blues singer, Mississippi Matilda. She announced her debut release last year on her YouTube page on August 20th as a fundraiser to raise $10,000 on her IndieGoGo page to finish mastering, mixing, art, and design by bringing her debut album to life.

She completed her goal with 156 backers and reaching $10,290. This is Beth spreading her wings throughout her arrangements that are finally brought to life. From the opening title-track, Beth chants through a different language with some of the primal screams and calling out to the gods as if she’s honoring two people; Delia Derbyshire ‘Ziwzih Ziwzih OO-OO-OO’ and the styles of Tara Strong’s voice work as Harley Quinn.

It’s almost as if the BBC Radiophonic Workshop are continuing Delia’s legacy and it’s inside the mind of Crystal Beth. Beth’s clarinet on ‘Our Piece’ goes into the heart of the forest as she goes through various locations. It echoes these incredible loops for a delicious Clarinet salad by honoring Gong’s Didier Malherbe before chanting out more improvisational arrangements.

With ‘Shrill’ Beth’s got the engines all revved up while she goes into full overdrive by screaming out more into the night. It’s almost as if she had wrote this piece for Bent Knee by creating tension by walking on this dangerous tightrope. And you can never tell if the rope is going to be cut or not. ‘Go Fast’ takes a break from the insanity as Beth beat-boxes, sings, and does a trip-hop mode through the sunset with her clarinet to set up this warm atmosphere as ‘Kali Out’ sees her honoring the sounds of Tuvan throat singing. While her clarinet reaches the outskirts of the cold wintery mountains between Siberia and Inner Mongolia, you can feel the goosebumps around you.

This is now my second time listening to Push Thru. And while I’m new to Crystal Beth’s music, let me just say this in the words of Pam Poovey from the TV series, Archer. Holy shit-snacks! This was another challenge that I’ve embarked on thru Trey Gunn’s label. Now mind you, Push Thru and Crystal Beth’s music may not be everyone’s cup of coffee, but this was something that will keep you guessing throughout this intensive roller-coaster ride that Beth Fleenor embarked her listeners on.