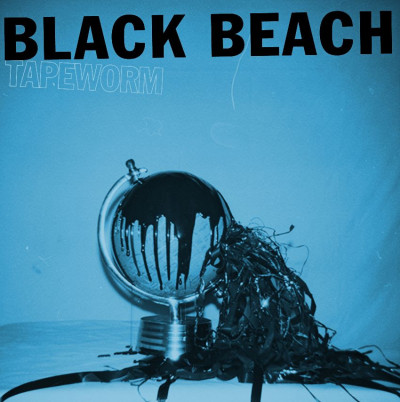 Boston slacker punks Black Beach are as confused, anxious and irritable as you are about the hellscape the world is right now and what their place in it might be. Tapeworm is their second album and it’s a pleasingly incoherent scream of disaffection mashing together post punk and noise rock with grunge and other random scrapings. The cover art shows a globe dripping in something dark and viscous, blood or maybe oil, and seemingly vomiting out a mess of tape and wires. Ambiguous enough to avoid a dull linear reading, it’s evocative and yet familiar. Like their music.

Crossing the Atlantic and washing ashore on the black beach, no new worlds are being discovered but there’s a lot to enjoy while you’re here. The dark sands are littered with clotted lumps of grunge, and scraps of twisted, corroded metal. Worn but recognisable shapes. The album opens with a minute and a half of loose, fuzzy, guitar weather almost as if the band have wandered onstage and are just checking everything is plugged in before the drums come thumping in. Black Beach started out as a hardcore band before quickly allowing the wider range of their musical interests into their songs but that sharp edged focus and ferocity is still in there.

Single and standout tune ‘Shampoo’ plays off personal hygiene against mental and emotional wellbeing to a snarling, tight leashed riff. Steven Instasi details a steady dental regime and asks “so why do I feel so wrong when I’ve been living so right?” which is perhaps the album’s most telling lyric. ‘Dumpster Fire’ follows it, staggering about, sloppy and lead footed in the half light. There’s a lot of space in the track, much of which is just drums and voice punctuated by blasts of guitar coated in Sabbath muck. The lyric is a disjointed, self lacerating monologue that feels like a drunken mirror conversation or a rehearsal for a confrontation that’ll never happen.

Their core sound is a loud and raging punk rock trio but they push and stretch it in a variety of directions. On the lengthy ‘Sage’ they head off into some bracing atonal skronk, wailing organ and saxophone pushing its red faced, raw throated roar into the storm. They contrast that with the thrashing distorted anger and dark humour of ‘Positive Feedback Loop’. ‘Nervous Laughter’ rolls up on an ominous minute of synth drone and the winning opening line “never cared for the Grateful Dead…” Here, and at a few other points there’s faint traces of The Fall’s whine and grind about them. Perhaps it would be more accurate to say other Fall-influenced bands. All the obvious reference points are a familiar roll of 80’s-90’s US underground names.

Usually I’m throwing them at UK bands to give a sense of where they’re coming from. So, for the sheer perversity of inverting that – if you like the current crop of bands like Dead Arms, USA Nails, Grey Hairs, Claw Marks, Girl Band, Punching Swans and so on, then there’s a home for you here. I doubt the Black Beach lads are familiar with any of them but I expect they all own some of the same records. They have absorbed and combined those sources with skill although they’ve possibly not stamped their own identity onto them as clearly as they could. Tapeworm is a solid album and suggests they’ve the both the wit and energy to get better still.