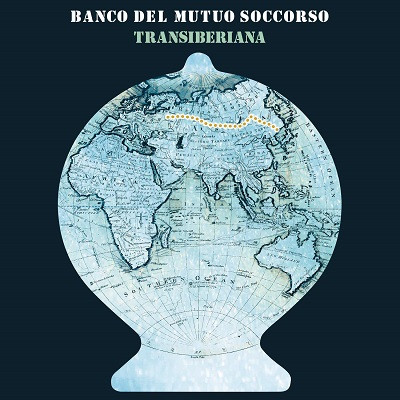 For 50 years, the masters of Rock Progressivo Italiano (Italian Progressive Rock), Banco Del Mutuo Soccorso have taken listeners to a whole different level with their music of Folk, Classical, Jazz, and unexpected time changes. With classic albums including their sole self-titled debut release, Darwin!, and Io Sono Nato Libero, Banco have some of the most incredible complex arrangements that you can never quite expect.

This year, they’ve released their 17th studio album in over 25 years entitled Transiberiana on the InsideOut music label. Now for the group to move forward after losing one of the most charismatic vocalists, Francesco Di Giacomo who died from a car accident in 2014, must have been the hardest decisions to keep the legacy going. And they did.

Tony D’Alessio, who came second place in the Italian version with X-Factor, and known for his work with bands such as Ape Escape and Guernica, became the new lead vocalist for Banco in 2016. In an interview on the 96th issue this year of Prog Magazine with Malcolm Dome, keyboardist Vittorio Nocenzi revealed that Francesco brought Tony’s attention to him.

“He once told me if he should leave the band, then this was the man to take over. So I knew about him for a while, before bringing him in two years after Francesco died.” Now Tony isn’t going to be like Francesco that Vittorio mentioned, but he has his own style. Transiberiana is a concept album that tackles both the fears and hopes you start out with. Vittorio mentions in the 96th issue of Prog Magazine that it is a rail trip from Russia to the Pacific Ocean. And while the album cover is a nod to the band’s debut release in 1972, it showcases the map on where the journey is located while the booklet contains chapters of the story in English, and the lyrics in Italian.

And the highlights on the album are a journey that is quite intriguing. ‘La Discesa dal Treno’ starts things off with guitars chugging and hitting those metallic cries as Tony sings in the middle of the coldest part of Russia as the rail car is suddenly stuck in the middle of the icy railroad tracks. You can imagine being caught in the middle of the worst snow storms as the music takes you towards into that area that it’s not going to be pleasant as the keyboards set up the atmosphere while ‘L’assalto del Lupi’ captures the Travellers that got off the train are assaulted by the wolves. The music invades the scenery that is very intensive as it becomes this cat-and-mouse chase on what is going to happen next for them.

‘Lo Sciamano’ begins with a Darwin-era keyboard by setting up this minor fifth as the vocoder’s arrangements sets up this futuristic twist before the speeding bullet comes in to reign some attacks with some unexpected moments by honoring the Grand Wazoo himself. ‘L’Imprevisto’ sounds like the late ‘70s era of Jethro Tull’s folk rock trilogy and David Gilmour’s textures before switching gears to go into some exercises by the Hammond Organ.

The two live bonus tracks that close the album off were recorded last year on September 8th at the 2-Day Prog Veruno festival. Banco shared a bill with bands such as Amon Duul II, Ange, Vanilla Fudge, and the Von Hertzen Brothers to name a few as they tackle two of their classics from their golden-era with a warming reception of ‘Metamorfosi’ and ‘il Ragno’.

Transiberiana is the next chapter of Banco’s legacy. Yes it won’t be the same without Francesco Di Giacomo, but as I’ve mentioned earlier for them to move forward, is perhaps one of the biggest yet gigantic steps they had to do. And for me listening to Transiberiana was a challenge.
And after a few listens to the new album deciding whether I was going to accept it or not, I welcomed it. For me, Banco Del Mutuo Soccorso aren’t just a band, they are a family.