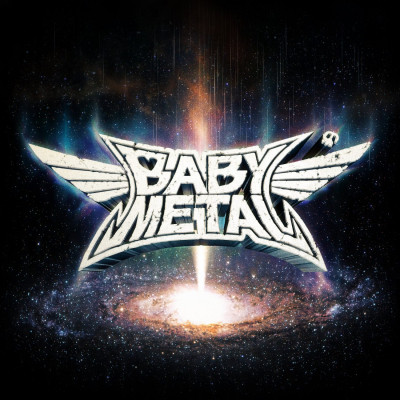 As 2019 trails off to an end that will likely end in a Martian invasion or the accelerated heat-death of the universe judging by how it’s gone thus far, it’s a fair bet to say that we need something of a break, a soundtrack upbeat enough to separate us from our concerns but weird enough to somehow make sense. Thank the Fox God, then, for the return of Babymetal, 33% down from past excursions after the departure of backing vocalist Yuimetal, but with new drive and a starbound trajectory. Whereas their debut worked due to its haphazard mishmashing of disparate genres and Metal Resistance sought to capitalise on their success by adding a more focused, song-driven approach, Metal Galaxy somehow crams the best parts from both into a 50-minute explosion of joy, silliness and hooks big enough to snag a megalodon.

It’s an album that sets out with several goals in mind and for the most part it achieves all of them, even if the level of success isn’t always evenly distributed. Its greatest triumph is that it recaptures a lot of their debut’s sense of adventure, but where songs like ‘Doki Doki Morning’ and ‘Onedari Daisakusen’ slammed together metal subgenres with the finesse and glorious spectacle of a hippo in a tutu, Metal Galaxy brings Babymetal’s ideals of humanity being united under the banner of metal to a logical head by introducing global and ethnic elements, be it in in the Day-Glo Bollywood stylings of ‘Shanti Shanti’ or in the rumba-flecked nu-metallisms of ‘Night Night Burn!’. These genre-mangling diversions have always been one of Babymetal’s more unique selling points and not only is their continued inclusion welcome here, but Su-Metal’s ongoing vocal development and Metal Galaxy’s versatile production works makes them some of the album’s strongest cuts, truly integrating the outer elements with chugging guitar work and perfectly polished pop melody.

Conversely, there are also efforts to play towards more distinct strengths. ‘Brand New Day’ feels like a straight-up J-pop song straight out of an early 2000s karaoke bar, unafraid to dabble in R&B and sugary vocal harmonies with nary a solo in sight, while ‘Oh! Majinai’ ropes in Sabaton’s Joakim Brodén to join the duo on a drunken folk-metal voyage that it’s almost impossible not to be swept along with, no matter your level of sobriety. Though they represent both sides of the band’s musical identity, each offer up a playful take on genres that can sometimes become mired in conformity, contributing partly to Metal Galaxy’s lovably oddball identity.

Make no mistake, this is an album with a real grasp on who and what it is. It’s maybe the band’s most coherent release to date, taking its loose global metal theme and running with it in a way that only Babymetal can. The only real missteps are towards the album’s conclusion, where it conversely seems to be trying to ape past album linchpins without necessarily understanding why they were ever needed in the first place (seriously, ‘Shine’ – we know that Su-Metal can sing by now, so why do we need a ballad shoehorned in?) but if nothing else, that only reinforces the idea that Babymetal are on the right track with this release. When Yui Mizuno departed last year, some fans quickly abandoned the remaining members for fear that the project was already done for; in a way, that’s true but something great has arisen from the ashes, a gaudy phoenix decked out in a sombrero and glowsticks, and it’s bloody spectacular.