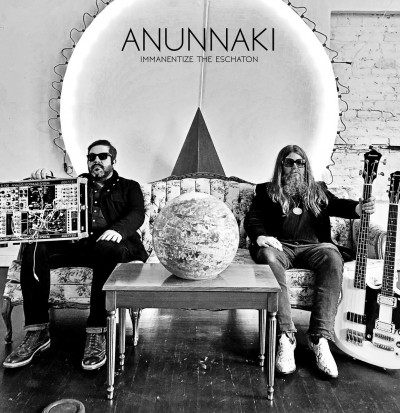 Immanentize The Eschaton by Anunnaki

Whether or not Anunnaki are actually deities is probably one of those decisions left up to the eye of the beholder, and one who may travail the expanses of British Columbia may end up believing that Dave Read and Arlen Thompson may incorporate some kind of mystical powers, albeit all the more likely in the form of some weird mushroom or “smoke”. Either way, there is no denying that the music they create together holds power that can be both vengeful and spiritual. Great traits for a deity, even better for Anunnaki as a band.

Bringing forth under a storm of thunder and locusts (ok, we have one Locust here, the other is more Wolf) Anunnaki’s second album Immanentize The Eschaton is one of those listens which seeps into your very being as it’s discordant, powerful music slowly unfurls under a haze of marijuana smoke. Take the opening track which simply builds up in it’s slow crescendo until petering out into a nothingness. Titled ‘Rise’, it indeed does give rise to some pure emotions within and as you reach it’s climax and you feel it couldn’t possibly go further, it drops right down into the atmospheric opening of ‘Procession’.

The slow, casual stroll of ‘Procession’ plays directly into the morbidity of doom, yet retains an edge which evokes the genteel meanderings of early Tangerine Dream. The modular sounds here though, are integrated with the meat and potatoes of bass, guitar and drums, providing a solid backdrop to the measured sounds that drift from the speakers. As the track develops, it evolves into a monstrous slab of marauding sound which given the circumstances, could probably move a mountain or two. Hey, these guys don’t mess about when it comes to sonic explorations, and you may feel a slight tingle within your insides as they are juddered about by the deep bass. Groovy, man.

If ‘Procession’ doesn’t make you question the validity of your existence, then final track ‘ Demiurge’ really is your ticket out of normsville. So much deeply into head music that it redefines what head music actually is, the track is the kind of distorted space rock epic which takes a simple riff and turns it into the march of a thousand aliens, each ready to imprint its footstep upon your brain. Each thud, each burst of guitar noise, hurtling towards an empty existence of psychedelic nothingness. You want rock and roll? You want your brain fried? This is the one…

And on that long drawn out note Anunnaki leave you on the long path to recovery as the album drifts to a close. Less a bunch of songs, and more of a mood piece, the mood they strike is one of intense psychedelic heaviness. It’s what’s within the tonal qualities that outlast the initial impact though, and long after you feel cleansed of any past disturbances on your being. Mood music, moody music, psychedelic music, man.