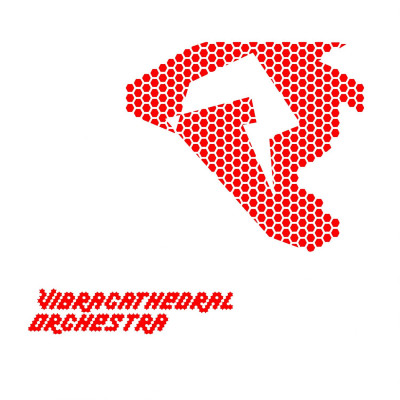 Squeeze The Lids Through Coming Window by Vibracathedral Orchestra

Vibracathedral Orchestra was always more of a collective than a strictly defined band, its lineup shifting from one to as many players as is deemed needed for the project. As such, on one hand it was always a shifting, improvisational sound that was practically impossible to define, but on the other, there was always a constant undercurrent that defined their sound – a constantly shifting perspective as if the (musical) ground below your feet (and ears) is never fully stable, but you are still standing. And so was Vibracathedral Orchestra and their sound.

In that respect, nothing has changed on Squeeze The Lids Through Coming Window, actually a two-track affair with the two composition titles serving as one. This time around, there are five players on hand, Godbert, Flower, Davenport, Campbell & Bradley do what Vibracathedral Orchestra has always done the best – combined their minds and playing/improvisational skills to produce sounds that are always shifting and always standing, drifting away and then coming back to the same musical standpoint.

But then there is yet another purpose to this release, as it is issued by Oaken Palace, a registered UK charity which dedicates each of its releases to an endangered species chosen by the artist. Vibracathedral Orchestra dedicated this release to pangolin, “the most poached mammals in the world, partly because their scales and other body parts are trafficked for use in traditional medicine.”

All in all, another baffling and at the same time exhilarating release by Vibracathedral Orchestra, with a worthy cause to boot behind it.