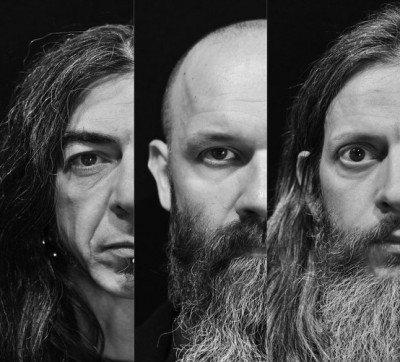 Twenty years is just one long amount of time, but it seems we started few years ago. We’ve lost the idea of time flowing.

To celebrate two decades as a band, Ufomammut have brought out an expansive boxset that demonstrates the power of the bands music and how it has developed over the years. We caught up with the band (guitarist Poia, vocalist and bassist Urlo and drummer Vita) to discuss XX as well as talking about the band’s musical history, new music, recent tour, their label Neurot and the Italian heavy music scene.

E&D: You have just released the XX Twenty Year’s Of Ufomammut boxsets. Can you tell us all about it?

We thought it would have been great to celebrate our 20 years as a band putting all the music we did during the years in a single place. So, a boxset was the idea, but we also wanted to do something special for it, so we put our hands in the creation of a different version of some of our songs to travel trough our story and we recorded, during our spring tour, XX, six songs played with acoustic guitar, synths and drums only. It was a different experience for us and we’re very happy about the final result. So, apart from the music, the boxsets contain a poster, a book, a patch (or a backpatch in the vinyl version), stickers and all the records are designed with a new graphic.

E&D: How does it feel to be celebrating twenty years as band?

Twenty years is just one long amount of time, but it seems we started few years ago. We’ve lost the idea of time flowing.

E&D: Did you ever think when the band started that you would be celebrating such a milestone?

Not at all. We’ve never thought about the band life expectance. We just followed our path, everything happened little by little and here we are now, after twenty years!

E&D: How did it feel revisiting your material from the past twenty years?

It’s been a very stimulating and hopefully fruitful experience. As we said, it’s been a different approach to playing music, we never had experiences of “acoustic” music, so it’s been a challenge for us, but the result has been really really mind blowing for us and hopefully also for our fans.

E&D: Looking ,back, how do you think that Ufomammut have evolved as a band over the last two decades?

Being self taught, we had to discover in our way how to control our sound and composition ideas. So we tried to evolve towards a sort of knowledge, keeping at the same time an idea of not defined and unpredictable.

E&D: Who did all the stunning artwork for XX?

Thanks for your words: like always, artwork has been designed by Malleus that are Poia and Urlo and Lu (she’s the one behind all of our visuals). Malleus and Ufomammut started together, they’re two faces of the same medal, one influenced the other and they grew a lot in these two decades.

E&D: Are there any plans for a follow up to your last album 8 at the moment?

We are focused on the XX concept at the moment. We already had some sketches for the future, but still too much undefined.

E&D: You are playing a number of European dates in the next month. Are you looking forward to those and what can fans expect from your set?

We hope they will embrace the music. We will put all ourselves into this new live experience. It’s a different way of entering stage, little by little, starting in 2, then becoming the entire band and same with the music… growing little by little till the grand finale of God.

E&D: What are your touring plans after these dates and into the new year?

We will end the XX celebration tour this year. Then we don’t know. We’ve to focus on new stuff for sure.

E&D: How did your shows with Neurosis, Yob and Kowloon Walled City go earlier in the summer and what were some of the highlights?

We only shared stages in Italy with them. It’s been an honour to play with these guys again. The highlight was surely the pleasure to play in Ostia Antica, close to Rome, in an ancient roman theatre. Incredible experience.

E&D: How did your US tour earlier in the year go?

Once we were there, it was great, like always. To play and to meet old friends and new people. On the other side, bureaucracy for playing there is more strict and annoying every time.

E&D: In April, you played a number of special acoustic shows, how was that experience and would you do another acoustic show like that in the future?

We played this set all over Europe in Spring and we recorded all the gigs and then we released the XX album. Andi Weimann recorded the video live at Gaswerk and it’s a really great thing. The acoustic side of Ufomammut is surely something we need to understand and discovery  in our way the future.

E&D: You have played a multitude of festivals over the years. What have been the most memorable?

It’s not easy to choose. Everytime it’s always great to share the stage with other bands…and some of them are part of our personal musical background. As musicians we are music fans too, and it’s a privilege to see those artists from the side of the stage.

E&D: What is your favourite song to play live and what is it about it that makes it so special?

‘God’, (it’s a song not an exclamation) for many reasons. It’s always the last song of the set. So after that one we say thank you to the people who came to the show. It’s an intense moment everytime. Music and people. Vibrations.

E&D: How did Ufomammut start as a band?

It started from the ashes of a previous band with Urlo and Poia…they were friends with Vita and they asked him if he wanted to join as a drummer.

E&D: How is life on Neurot Recordings?

It’s an easy life: they are musicians, they know what it means.

E&D: How did you come to be on the labels and were you big fans of Neurosis?

Steve contacted us after listening to Eve. We had other proposals at the time, but we respect the Neurosis integrity and attitude so much that we decided to join their family and it’s been a great choice.

E&D: What is the Italian heavy music scene like at the minute and can you recommend any bands for us to check out?

There are a lot of good bands in Italy, but you have to dig deep in the underground. With SupernaturalCat (the label of Malleus), we tried to find and create a scene, but it’s been quite difficult for us, but we discovered a lot of great bands like Lento, Ovo, Morkobot, Incoming Cerebral Overdrive. Then there are other bands really interesting, like Turin Horse, Stormo, Dolpo and many many more.

E&D: What have been your most memorable moments in your time with Ufomammut?

Difficult question again: we’ve been stubborn but also lucky and we had the chance to play our own music outside of our little neighbourhood on the most diverse stages, alone or sharing the stages with other bands, meet new people everytime, travel through incredible landscapes and visit countries around the world. What can we ask more?