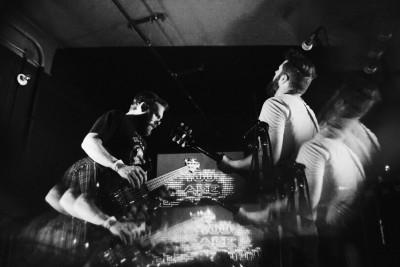 Consumer explores much more impersonal themes - production, commodification, acquisition, automation. Both bands share cues in noise experimentation and creeping occult interests, but beyond that, they are different animals.

Consumer will release their new album In Computers on October 25th through The Flenser, and we’re proud to bring your the exclusive premiere of the track ‘Massive Subsidies’ below. Our editor Sander asked Tim some questions to find out more about the band and the new album…

E&D: Can you please introduce Consumer to our readers?

Tim: We are a loud post-(fill in the blank) band from New England. The voice is late capitalist agitprop, barely aware of its own marketing message.

E&D: The music you make with Consumer is quite different than Have A Nice Life. Is it just an outlet for a different creative side or is there more to it?

Tim: Initially, Consumer started as something for us to do after Have A Nice Life finished its round of shows in 2017. We got to the end and thought, “Well, what now?” When we got back into the practice room, this is what came out.

Consumer explores much more impersonal themes – production, commodification, acquisition, automation. Both bands share cues in noise experimentation and creeping occult interests, but beyond that, they are different animals.

E&D: What would you say your main influences are? Could you name 3 records that have played a huge part in influencing you as the musician you are today?

Tim: For this project?

Devo – Q: Are We Not Men? A: We Are Devo!
Pere Ubu – The Modern Dance
Melvins – Houdini, Stoner Witch, Joe Preston EP

E&D: The new album In Computers is divided in 2 parts; the first half is very Melvins-like sludgey noise rock, whereas the second half is more harsh ambient/noise. Is there a reason behind this contrast?

Tim: The project will always feature abstract electronic work – in this case, a stark symmetry felt right, like Black Flag’s Family Man. For this release, the idea was, “Flip to the B-side and you’ve crossed a ‘permanent’ threshold.” Expect more in the future.

E&D: What is the meaning behind the album title “In Computers”?

Tim: It was a non-sequitur that snuck into an early band bio. Some of us have careers in technology fields, so we said, “They are ‘in computers,’” as in, “What does he do for work? He’s ‘in sales.’” But when we thought about it, it’s sort of an appropriate phrase in relation to some of the themes that we explore through our music – “computers” as a potentially sinister channel for markets, power, and persuasion.

E&D: Have A Nice Life is also about to release a new album, how do you combine your energy into both projects, and how do you keep your creativity going for both?

Tim: Up to this point, working on both in parallel has been interesting. Since Consumer members are a subset of Have A Nice Life, when we rehearse one band, the other one gets better too. Sometimes it can be a bit overwhelming when we are planning to play a show with both bands or when there was work to do to meet deadlines for both albums. But we have a continually growing shared musical vocabulary, which is a great benefit. We like to joke about becoming the Enemies List house band, backing up many different artists; a feedback-squealing, growling, twenty-first century version of the Meters or the JBs or something…

Tim: Logistically, yes, it’s simpler. We only have to transport equipment and people once but we get to give two quite different performances and see the reactions of people whose likely primary purpose for being at the show is to see Have A Nice Life. We do have to be careful about conserving energy for the later part of the show. So far, though, the crowds have been quite receptive to our barking and sloganeering.

E&D: Do you have any plans to take Consumer on the road at all? Will you come over to Europe?

Tim: We certainly want to play more shows, whether they are together with Have A Nice Life or separately. If the good people of Europe will have us and we can afford it, we would love to. (Consumer has already “played in Europe” once when we snuck a song into the end of one of the Have A Nice Life sets at Roadburn 2019, but that probably doesn’t officially count.) Another satisfying element of this project has been collaborating live with our visual whiz, Cody Kestigian – also in computers.

E&D: Lastly, I was very lucky to see you play Deathconsciousness in full at Roadburn this year, which was outstanding. How did you experience this show?