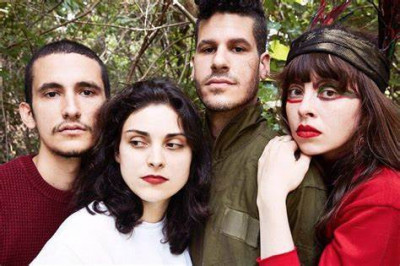 ''To work with him (former Talking Heads and producer Jerry Harrison) was definitely a honour and a pleasure. Every five minutes that would go by in the studio with him the thought of oh my god that is Jerry Harrison would pop up in our heads. He validated me as a songwriter and the band, and even encouraged us to re-think certain bars, while not changing much of my arrangements and staying true to the story of the album and the lyric.''

Le Butcherettes are about to embark imminently on a substantial headline tour of North America in support of their Jerry Harrison (former Talking Heads guitarist/keyboardist) produced bi/MENTAL album, out now on Rise Records. Teri Gender Bender kindly took time out from their tour preparations to reveal to Echoes And Dust the honor of having Jerry Harrison as producer, the band as a family, how the Buzzcocks inspired her in more than just a musical way, and a lot more besides. Read on…….

(((o))): You have just released a video of the band, and a single, doing a Le Butcherettes styled cover of The Buzzcocks classic ‘Ever Fallen In Love (With Someone You Shouldn’t’ve)’ with a slightly different arrangement. Why did you choose this song?

Terri Gender Bender: It all started as a collaborative project with the amazing guitar company Fender. They have been very supportive and they invited us to work and have a good time on their campaign for their new line of guitars called the Vintera Series. They gave us a list of songs of classic 70’s punk rock gems and there were so many we wanted to do, but ended up gravitating towards one of my all-time favorites heartbreak jams by one of my favorite bands since I was a little kid. The Buzzcocks were the first band to bring awareness to musterbation to me, that it was actually a real thing, that I wasn’t the only one.

(((o))): Your current album bi/MENTAL was produced by Jerry Harrison, what did he bring to the recording process?

TGB: To work with him was definitely a honour and a pleasure. Every five minutes that would go by in the studio with him the thought of oh my god that is Jerry Harrison would pop up in our heads. He validated me as a songwriter and the band, and even encouraged us to re-think certain bars, while not changing much of my arrangements and staying true to the story of the album and the lyric. I also think that the engineers and the band that worked on the record were glorious. It was a well-rounded team of artists just taking the time and effort to give to something called music.

(((o))): Your compiling quite an impressive list of legends guesting on your albums; Iggy Pop on the song ‘La Uva’ from the A Raw Youth album, and now Jello Biafra on ‘spider/WAVES’ and Alice Bag on ‘mother/HOLDS’ from bi/MENTAL. How did you get Jello and Alice on board?

TGB: It all comes about very naturally. Normally, it’s because I think I see them out so much in my fantasies and in my prayers, that eventually life of my light starts pulling me in towards these icons whom I admire so much since the beginning of time. Essentially, through our friendship, I would take the time to ask them if they were up for it. It’s all a different process with everyone so it was very inspiring to be able to live this and make music with friends and family.

(((o))): The album title bi/MENTAL and all the song titles have / (slash) in them. I take it this was no accident. What was the idea behind this?

TGB: The slash in the song titles represents a disconnection and ire with the all, especially the inner self. Many people spend so much time looking outward that the internal mind and rational voice begins to rot itself bringing the animal self to a much more agonizing slow death.

(((o))): There are a few songs on bi/MENTAL which sound like your most personal to date, for example ‘strong/ENOUGH’, would you say that is true, and if so, what prompted this?

TGB: All my lyrics and songs come from a place of truth, and also in a sense of trying fun at the self and at the dimension that we reside on as a whole.

(((o))): I don’t want to tempt fate, but does having a steady line-up help the band evolve easier, both as a live unit and creatively?

(((o))): As a performer – you don’t hold back – your shows are both visual and thrive with energy. How do you psych yourself up before each show?

(((o))): Have you incurred any injuries during a show?

TGB: Luckily nothing serious. Thank God. I really wasn’t thinking at all.

Oh my, I could have really hurt myself having exposed myself to electrical outages and the likes. I once accidentally caused injuries to people at a show and since those circumstances I would be more careful. Don’t ever want to dislocate anyone’s arm ever again.

But seriously, a lot of the times I’m reliving the lyrics or reinterpreting them in the moment while singing, I love to make a connection with the audience so sometimes I find a person to sing the song too and it helps ease the mind from incoherent thoughts of not being good enough.

(((o))): There have been many varied stage props used in your shows. Are there any which have remained in the set for a long time? And, are there any new additions for the upcoming North American tour?

TGB: Right now, it’s a bare boned concept with the band and the instruments as center pieces. Although for this new run we have finally acquired a band place mat. Jaja! It’s my dream to reincorporate stage props but for the sake of simplicity and practicality we have kept everything to the essential.

(((o))): Now Le Butcherettes back catalogue is growing, it must mean more choices and decisions have-to be made for the set-list, is there a tendency to alter the set-list more frequently?

TGB: Funny that you ask! As a guest artist, we tend to play different sets every night as a form of practice of keeping all our general list of songs fresh and tight. When we headline we tend to make new sets per tour and stick to it because we usually try to play at least over 15 songs. But, it is nice to have a wide selection to choose from and being able to adapt the set lists based on different moods that are being felt.

(((o))): Do you approach headline shows differently compared to being a support band?

TGB: Being a support band is definitely a lot more relaxing because not much is expected of you. When you are a headliner, you are expected to sell a certain amount of tickets and based on the numbers are welcomed back to the venue or not etc. Just logistical things like that.

(((o))): How would you describe a Le Butcherettes gig to someone who hasn’t yet had the experience?

TGB: I don’t have a full perspective but I hope that one day if you do find yourself catching us live please remember that one day we are going to die and that sooner or later we are going to have to tame our animal personality to be well prepared for the passing of another dimension, of a consciousness that we within ourselves have denied, but have none the less.

Once again, thanks for answering the above questions for Echoes And Dust. It is very much appreciated.

Check out the dates of their North American tour on Le Butcherettes website.