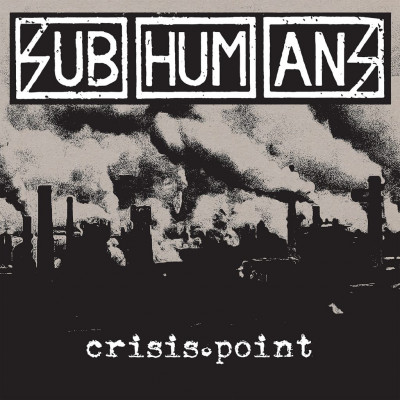 Subhumans have been at the forefront of forward thinking punk since their inception in 1980 and as leading lights of the anarcho punk movement, they released two of punks most influential and well loved albums in The Day The Country Died and From The Cradle To The Grave. Albums that still sound fresh and vital as well as still being relevant (sadly) with the subject matter they sing about with subjects like war, religion, politics, the power of the media and thinking for yourself very much top off the agenda.

The band have broken up and got back together numerous times over the years but are thankfully very much back together again and sound both energetic and revitalized on Crisis Point, the band’s latest album and their first new album in twelve years. You can still see why the band have been a massive influence on so many punk and hardcore bands as well as bands who have punk roots such as Neurosis.

The album kicks off with the urgent ‘Terrorist In Waiting’ and this begins a non stop barrage of insightful lyrics, punk anger and an energy that would shame the majority of new bands, let alone a band that has been going for the past four decades. Tracks on the album such as ‘Atom Screen War’, ‘Follow The Leader’ and ‘Punk Machine’ are all quintessential Subhumans tracks and to be honest, the whole album is packed full of highlights with a nonstop and quickfire approach with each track as it follows the last.

As the final track ‘Thought Is Free’ rings out, the overall feeling is that Subhumans have never really been away and the album flies by in such a way that it feels like no time at all has passed. Dick Lucas still spits out his lyrics with passion and the songs in Crisis Point are as biting as they were when Subhumans first belted out songs like ‘Big Brother’ or ‘Til The Pigs Come Round’, and when he sings that “Fear and confusion, will have us all fucked” on the track ‘Fear and Confusion’ for example, it is done with a real venom.

Crisis Point is a definite highlight in Subhumans career and has definitely been worth the long wait. Hopefully they won’t leave it as long next time in bringing out a new album, especially when it is as good and vital as this one. The overall feeling with Crisis Point is that it is good to have the band back making such joyous and triumphant music.