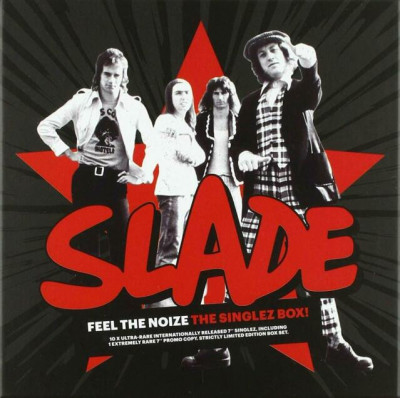 Feel The Noize by Slade

Everybody loves Slade, don’t they? Well, to anyone over a certain age they are woven into the fabric of our youth, eliciting a rosy glow and a cheesy grin at the mere mention of their name. As British as black pudding, Noddy’s tipsy town-crier voice and Dave Hill’s oddball fringe and outlandish outfits on Top of the Pops are like an aural and visual shorthand for simpler, happier days. And then there’s that Christmas song. . . Yet despite their unshakable position in our collective memory, once you get past the flash-card Slade signifiers I suspect most people are relatively unfamiliar with the majority of the band’s back catalogue. Even some of the “smashes” in this new singles box-set may be only a dim glow at the back of the mind, possibly due to the band’s, let’s face it, quickly tiresome habit of deliberately daft spellings – can you whistle the melody to ‘Take Me Bak ‘Ome’ ? I can’t, and I readily admit to approaching this band as a novice.

This box-set Feel The Noize, compiles ten rare European released 7-inch singles, including the very rare ‘Night Starvation’ but that aside, and wherever they were distributed, the rest of these tunes were terrifically successful at time of release, Slade being a virtual hit machine in the early seventies. The Christmas song, tellingly isn’t among them.

I decided to approach this review by avoiding looking at the running order, the chart positions or any other influential information and just played the songs on random regularly for about a week. My aim was to avoid the received ideas of the band and just concentrate on the songs. Let’s face it, if you’re a casual fan you’ll start with a Best of. . . and as I have sadly only been given digital versions of these singles I cannot enlighten the committed Slade-ophile as to the various divertissements of the packaging.

The first thing I note is the incredible gift chief songwriter Jim Lea had for strong melodies. My methodology was, as I say, to play the tracks randomly, the idea being I would let my ears pick up on the most interesting songs, and there is barely a tune here that doesn’t beg for your attention. You can’t usually tell what’s an A side and what’s a B.

Strangely, despite this method, it is still the first single here ‘Coz I Luv U’ that makes the biggest impression. The more you hear it the greater, and yet odder it sounds. Built around Lea’s serpentine violin melody and incredible rising bass thwack, the resonance of which grows to that tension releasing, jubilant “la la la” from Noddy near the close, it is a masterpiece of sonic invention. Ostensibly a love song, the structure of the song gives it a creepy stealth at odds with the open hearted lyric. That is until that break in the mood where it becomes a huge knees up. Yes, you think you know the song, but go back and play it loud through decent speakers and you’ll be convinced of its genius.

Lyrically it’s the usual fare for rock bands: touring, loving and leaving, but they are done with charm and aplomb – two standouts being the Beatles-ish melancholy of ‘Everyday’ and the more heroic ‘Far, Far Away’ with its infamous “I’ve had a red light off the wrist, without even being kissed” line which radio stations at the time missed!

There are certainly some curveballs amongst all the boozy stomps and misty-eyed reveries, including the flip side to ‘Coz I Love U’ – ‘My Life Is Natural’. Driven by a restless acoustic strum, it has the energy and cadence of a Blue-era Joni Mitchell number, mixed with a more flashy and muscular Led Zep drive. It is an absolute belter! Elsewhere ‘Kill ‘em At The Hot Club Tonite’ is the only real misstep, being a whimsical bit of nonsense played in a hot-jazz style which really doesn’t suit the band.

What it does show though is that although the band are mainly remembered for their Super Yob style and beery, working-man anthems, there is a lot more to their music in a catalogue ripe for rediscovery. It has been an absolute treat, and something of an education, listening to this box-set; so come on, feel the noize!